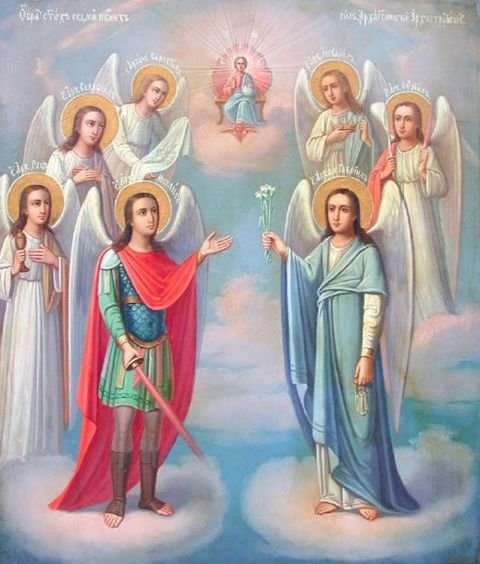 From the beauty of the Lord to the angel of God. Today we will know about the seven Archangels also known as the “Watchers” of this Earth. Regardless of your religion stories of Angels are part of your reality. And some of the things that make up human nature. Over 80% of the world’s population believe in Angels.

The term Archangel is derived from a Greek term that means chief angels. Archangels are superior beings that are the extensions of God himself. hence they personify his grace power and majesty.

On top of that all the Archangels are healers. Typically they come as surgeons ready to repair our bodies through bending our souls to be more specific there’s no field that they don’t excel in.

In terms of rank, Archangels are at the top most hierarchy in the Angel world. They are arguably the closest beings to God. Archangels are powerful beings in the spiritual realm. More to that Archangels watch over other angels humanity and also other aspects of the universe itself.

Most people believe that you can learn to communicate with them and also evoke their power in times of need. Your gu ardian angel can help by guiding you through the levels of spiritual Growth and Knowledge.

Let’s take a look at each of the seven Archangels and their attributions to humankind.

The name Michael basically means he who is as God. Archangel Michael is known as the angel of protection and also the most powerful among all Angels. He is also considered to be the leader of the angelic realm and the patron of righteousness mercy and justice. The is why the Scriptures have always depicted him as a warrior carrying a sword in his hands. Being an archangel michael commands a legion of Guardian Angels all serving is the first line of protection. The will of God and faith.

These are the words that Michael says directly addressing Satan. In the scriptures Michael argues with Satan about the body of Moses. However not a lot is said about the argument.

Michael is the most interesting biblical Angel that’s next to Gabriel and Lucifer. Michael is arguably the most famous angel in the Bible.

The reason why Christians refer to angel Gabriel as an archangel is due to the Book of Enoch that was released between the old and new Testament. In the book Enoch refers to Gabriel as an Archangel. Otherwise the word archangel is only used in the Bible once to refer to Michael.

In the scriptures Archangel Gabriel only speaks directly to three people. The angel appears to Zechariah to tell of the future birth of John the Baptist, to Prophet Daniel and lastly to Virgin Mary.
The first time Gabriel is mentioned in the Bible is when he appears to Daniel to explain his vision. Gabriel explains the vision to Daniel after being called upon by God.

The name ariel mean the Lion of God. That means Ariel is responsible for protecting the Plants, Animals, and Elements of the World which include Wind, Fire, and Earth. Therefore anyone who will bring harm to God’s creation is usually punished by
Archangel Ariel. So whenever you’re conserving the environment ask for help from Ariel. Ariel not only protects God’s creation but she also guides people to protect it as well. Whether she does it herself or uses others to help. The main aim is protecting what God created.

The name Azrael can be translated to the angel of God in Hebrew. Some people actually refer to him as the angel of destruction and renewal. However that’s not a reason to fear him is not the bringer of death but rather the spiritual guide. His role is to guide Souls during death to cross over calmly. The role of Azrael sort of resembles the role given to Anubis found in ancient Egyptian mythology.

Additionally Azrael is credited for being a spiritual counselor. During times of grief Azrael ensures that you don’t completely lose your mind or even do something that you shouldn’t do. Also Azrael keeps track of those people who are born every day and those who die. Therefore he knows the exact population of the world at any given moment.

The Archangel Raphael mean is The God who heals. Raphael is known as the ultimate physical and emotional healer in the realm of the Angels. This means that he is not only a healer
of people but he also guides healers in their process.

Additionally Raphael can help you let go of your addictions and has the power to heal physical injuries.
The people who need healing will always pray to Archangel Raphael. The angel helps in restoring and maintaining peace and
harmony to the world and in the realm of angels. He also watches over travelers to ensure they have a safe journey home.
Raphael works in conjunction with Michael to help relieve stressors and fears that might affect your health.

The word Jophiel means the beauty of the Lord. Hence, the main power of the Archangel Jophiel is to help us maintain our beauty in life and also giving us positive thoughts. she is also known as one of the few female Archangels to exist. In short Jophiel helps us to appreciate the beauty of the world. Therefore when you stop to admire a flower chances are you’ve been visited by Jophiel.
Whenever you feel negative thoughts the best idea is to pray Jophiel for positivity. So when all your negative thoughts are replaced with positive vibes then you’ve been visited by Jophiel.

Additionally Jophiel also helps to boost your creativity and imagination all in the aim of trying to show you how miraculous the world is. If you ever lose sight of the meaning of life then pray to Jophiel for clarity.

The name Chamuel translates to he who sees God. Throughout history this angel has been called different names over the years. Therefore it’s easy to confuse Chamuel with other Angels. His sole mission is to bring peace to the entire World. Most people believe that Chamuel can see the innerconnectedness of all things that exist. He also assists us by giving us the strength to fight adversity even when it seems we have none left. More to that Chamuel is known to help people find lost items and also find important parts of their lives.

Additionally Chamuel also helps to heal anxiety and bring peace to a troubled Nation. He repairs relationships and any misunderstandings between humans.