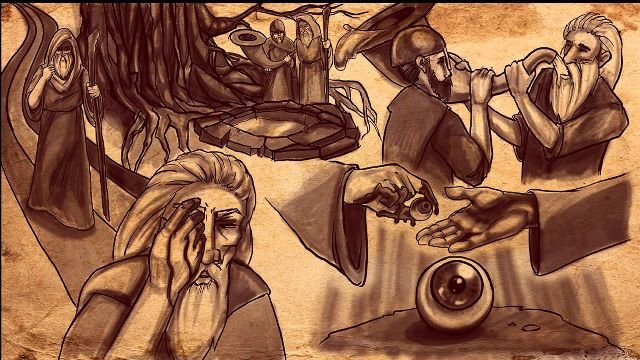 Odin is the Supreme God in Norse mythology. He reigns from high above on his throne in Asgard. We know Odin for his power and strength in battle but he always favored wisdom above all else. He Represents both war and poetry, the depths of Odin’s complexity as the all-father in Norse mythology knew no bounds.

One day Odin found himself deeply troubled, whispers of war and prophecies of Ragnarok keeping him continuously on edge. At that time he was aware that he did not know everything so he thought that he required more knowledge to navigate through such difficult times.

How Odin Lost His Eye?

Odin was Aware of the existence of a magical well that was said to grant infinite wisdom from its waters. So he set off and disguised himself as an old wanderer into the world. After arriving at the great world tree “Yggdrasil”. Beneath its roots lay the “Well of Urd”

Advertisement
also known as well of knowledge. Mimir lived in that place. He was quite an Ancient deity and Mimir was also Odin’s Uncle. Mimir was the keeper of that “Well of Urd” he drank its wisdom daily from the horn.
Because of the water of the “Well of Urd,” Mimir was a shadowy being whose knowledge of all things was practically unrivaled amongst the cosmos.

Odin entered the chamber and asked Mimir if he may drink from the waters and gain its wisdom. Mimir replied that he may drink, but only if he was willing to pay the price.
Odin asked What price he would have to pay. Mimir said the price is your right eye. You must be plucked your right eye out and throw it into the well.
Odin hesitated at first but because of his desperation for wisdom, Odin agreed to the terms. He Plucked his right-eyed out and placed his eyes inside the water of the well. The pain of Odin was so loud that it echo throughout the Universe.
The sacrifice of Odin pleased Mimir and he offered him a horn with water from his well and asked Odin to drink everything at Once.
After having drunk the water of the horn Odin’s wisdom grew to unimaginable levels. The visions eventually passed and he found himself empowered, knowledge swelling inside him.

Where is Odin that eye?

The place once occupied by this eye was replaced with a major scar, which sometimes emanated an intense brightness.
From that day Odin became known as the one-eyed or one of the flaming eyes.
The eye sunk deep into the waters but its form continued to glisten like glass, a sign of the sacrifice that Odin had made this day.

You might think that Odin lost his eye in a great war or a mighty battle, but rather it is a lesson of Odin’s sacrifice for his pursuit of wisdom. He may have lost an eye, but in the end, he saw more than he ever had before.

How Zeus became The Supreme God of Greek Mythology

How Odin Lost His Eye FAQs

Who took out Odin’s Eye?
Mimir
For Quest of wisdom, Odin gave his right eye to Mimir. who was the keeper of “Well of Urd”.

Did Odin lose his left or right Eye?
For drinking the water of “Well of Urd” Mimir asked for Odin’s right Eye,

How did Odin lose his Eye summary?
For gaining more wisdom Odin must sip the special water of a well of Urd. This water gave him a vision, and or prophesy of the past, and the future. But the price for drinking this water was Odin’s Right Eye.