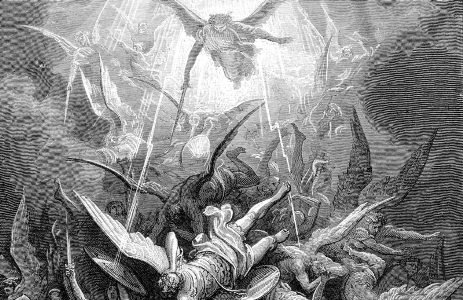 History of the Archangels

There are only two Archangels named in the canonical Bible that the Protestants and the Catholics used. They are also named in the Quran as well. These Archangels are Gabriel and Michael.

Originally there were seven Archangels discussed in the Book of Enoch. These Archangels were removed from the scriptures because of a reason that we will tell here.

The other five angels are known by many names but their popular names include Ariel, Raphael, Azrael, Jophiel, and Chamuel. These angels are part of the myth of the Fallen Angels which is an ancient story that’s older than even the New Testament.

These stories actually date back to the Bronze Age. When the first temple was built in 300 BCE. This is also when King Solomon

Advertisement
built his first temple in Jerusalem.
Some of the tales found in Greek and Hurrian have similar concept to that of the fallen Angels. More to that the names of the angels were borrowed from the Mesopotamian Civilization.

The Origin Of Sin

According to the Canonical Bible, that we all grew up believing in the origin of sin started with Adam. But when it comes to the myth of the fallen angel. It suggests that humans were not entirely responsible for the Sins of the World. The Fallen Angels also played a part in it.

The fallen Angels including Nephilim, Assail and Shemyaza dropped down to earth and took human wives. The wives gave birth to Giant children, who were violent.
The worst part of it all is that they taught the family of Enoch the secrets of heaven and in particular the precious Metallurgy and metal. The result was bloodshed which caused an outcry from the earth that was loud enough to reach the gates of Heaven.
The Archangels were able to hear the cry and reported to God. Then Enoch went to heaven to intercede for humans but he was blocked by the heavenly hosts. For his efforts Enoch was eventually transformed into an Angel.

After all these events God then told the Archangels to intervene by warning Noah, who is a direct descendant of Adam. Then the guilty angels were imprisoned and God destroyed the offspring of the angels by purifying the world.

Rejection of the Myth of the Fallen Angels

By Second Temple Period the Fallen Angels myth was transformed with some of the religion believing that it is a story that shows who the High priest is allowed to marry. This says that the religious leaders are warned against marrying outside the circle of the priesthood. What remains of the myth of the fallen Angels.
Even after the removal of this Myth from the Bible. Traces of the battle between the Angels still remains. The battle between Lucifer and Angel Michael can be found in the “Book of Revelations”.

The battle between Lucifer and Angel Michael takes place in heaven and not on Earth. As much as Lucifer fights a host of angels only angel Michael is named among them. That is because the rest of the story was removed from the “Canonical Bible” in the period between 366 to 384 BCE by Pope Damasus. The Council of Rome also played a part in removing the story from the Canonical Bible.