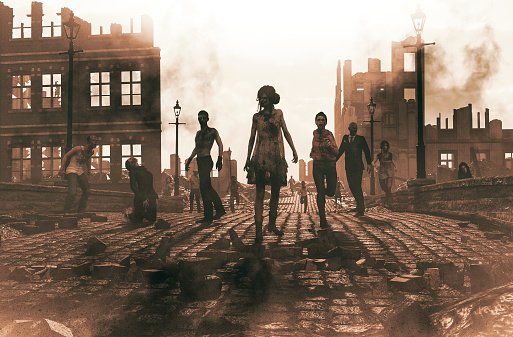 The zombie apocalypse is a fictional genre where the entire civilization is affected due to the rise of dead persons. You must have seen in Hollywood movies a group of actors dressed as zombies.

When such a situation arises there are very few survivors who have to struggle for food, weapons, and other supplies in a collapsed environment. Basic services like water supply and electrical power remain shut, mainstream mass media or government stop functioning.

There may be two reasons for the zombie apocalypse. One is due to the rise of the dead who attacks others and the reason for which is unknown. Another is due to some infection or parasite which gives rise to a plague-like situation. In both, the situation leads to panicked civil society and the outbreak becomes a growing crisis.

Can zombie apocalypse happen in real?

There is no evidence to date about it but researchers say that it can happen. Some diseases like rabies, leprosy, etc. can have similar situations like a zombie apocalypse.

The outbreak of some virus may end up with having zombie-like variant. Just like the coronavirus pandemic, zombie apocalypse can also happen due to some deadly diseases.

Similar to the fast-spreading coronavirus, there is an assumption that the zombie virus would travel quickly to create an apocalypse.

The narrative of zombies rising and putting civilization to an end is a commonly used theme in many films or TV shows in Hollywood. Some Bollywood films like Go, Goa, Gone also showed zombie apocalypse.

In TV, films, and soap operas, zombies bite people and turn them like them. Very few people are left living.

The film, Night of the Living Dead, is the originator of this genre. This film has a deep relation to the turbulent social landscape of the United States in 1960.

There is also a novel on the topic for e.g I am Legend by Richard Matheson’s which has been adapted to several screenplays e.g. The Last Man on Earth, The Omega Man, etc.

The storyline of zombie apocalypse films or shows is common like the first time contact with zombies are extremely shocking, traumatic, full of disbelief and shows the survivors’ inability to deal with such situation.

The authorities are also slow to respond in such a situation and the growth of the zombie plague expands beyond containment. In such circumstances, zombies take full control and the small group of survivors has to fight for their survival.

What steps you can take to save yourself from this apocalypse?

All these while you have seen zombie apocalypse only in fiction but are you prepared enough to deal with such a situation in real?

There are certain tips you can follow to prepare yourself for such uncertainties. These are as under:

Zombie apocalypse seems fictional and there is hardly any possibility of such a situation arising in the future. It is only common in the work of fiction like films or TV shows. But, researchers don’t negate the possibility of the occurrence of this apocalypse. It may arise due to some deadly illnesses if not by the rise of the dead.