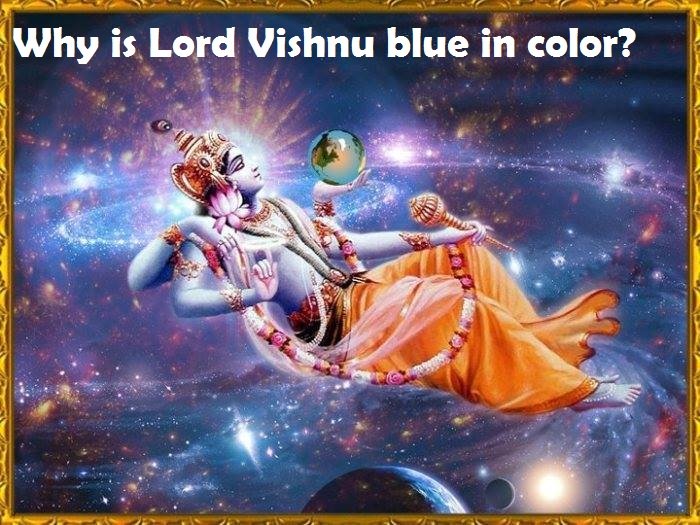 Vishnu is the protector of the universe. He is one-third of the trinity of God. The other two are Lord Shiva and Brahma.

Whenever we see the supreme creator on any television program, poster, calendar, or photograph, we often wonder, “Why the deity Vishnu is blue?”. The answer to that lies in Lord Vishnu being infinite and endless like the Sky.

Vishnu’s supreme personality is immeasurable just like the limitless sky.

Vishnu – Omnipresent, Omniscient and
Advertisement
the creator of the Universe

Lord Vishnu is surrounded by a vast cosmic ocean and he rests atop a hundred-headed serpent called Sheshnag. Vishnu has control over the many desires of the mind. He is all-pervading. Vishnu’s blue skin depicts irresistible charm. He is like water representing the flexible nature.

Blue and black are the color of creation according to ancient sages. Vishnu is also blue. Thus, he is the creator of the whole Universe and He is all-powerful, omnipresent, and omniscient. The two incarnations of Vishnu – Lord Krishna and Rama’s are also depicted as blue in Hindu mythology.

According to Isha Yoga Founder Jaggi Vasudev (also known as Sadhguru), ‘Blue’ represents all-inclusiveness. Anything like the sky or ocean, which is beyond our perception, generally tends to be blue.

Lord Vishnu’s irresistible charm was such that even people who were his cursed enemies inadvertently gave in to his aura.

The color blue represents his infinite force. He is the supreme with infinite power. He had the power to turn around people effortlessly who conspired to kill him any number of times. Lord Vishnu’s blue color assisted him in whatever he did. The blue tinge skin reflects his cool nature and tranquil approach to saving this world.

Lord Vishnu was beyond people’s perception. He had an infinite aura.

Swami Chinmayanada, an inspiration behind Chinmaya Mission, pointed out that the mortal eye sees anything that is endless as blue. It is like the Cloudless summer sky which also appears blue to the physical eye.

Lord Vishnu has incarnated nine times to destroy evil and restore peace on Earth. His various manifestations are :

Rama and Krishna are the most important of all the incarnations of Lord Vishnu. Lord Rama was the seventh incarnation of Lord Vishnu and is the main character in the classical Hindu Epic, The Ramayana. Hindu followers gave lord Rama the status of God. Like Rama, the devotees worship Lord Krishna too as God. He is the eighth incarnation of Vishnu. Krishna is also an important character in another Hindu Epic, The Mahabharata.

For the Hindus, the colors of deities have a significant role to play in religion. Colors used by Hindu artists to depict deities signify their qualities. For instance, Vishnu with blue skin stands for the qualities like bravery, determination, ability to deal with difficult situations, manliness, and wisdom. His two incarnations (avatars) Rama and Krishna are also blue. Vishnu is boundless and has no form, name, and he is incommensurable. All these relate to the color blue.

Moreover, the place Vaikuntha was the abode of Lord Vishnu. According to the Bhagavad Purana, the inhabitants of the planet of Vaikuntha have a glowing sky-bluish complexion. Thus, Lord Vishnu is considered to be blue.