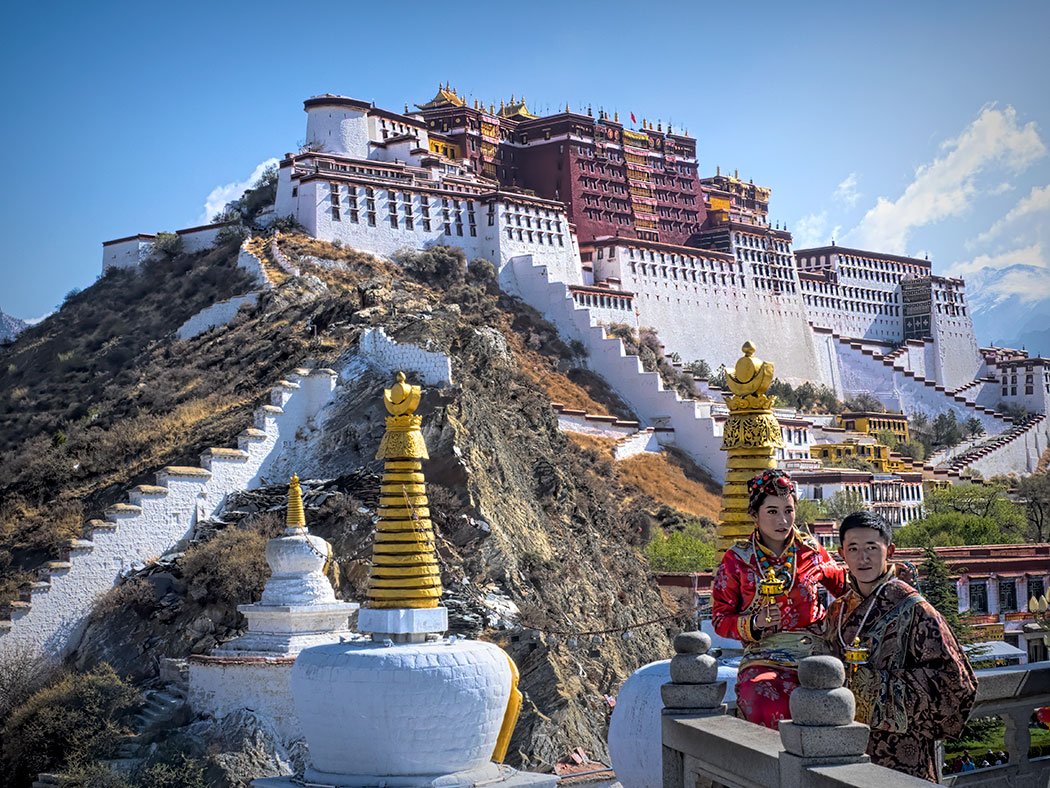 Clear blue skies on the top, plateau mountains, snow-covered peaks, sacred chants across streets, people doing parikrama on feet, and the sounds of melodic chimes. Doesn’t this remind you about the roof of the world, Tibet? The roof of the world also has the – World Highest Palace, Located in the heart of Lhasa, Tibet. This beautiful palace is the Home to his holiness The Dalai Lama (winter palace) or called Norbulingka traditionally.

1) Location and How to get to Lhasa:

Tibet’s altitude is 14,370 meters above sea level. Potala palace is situated approximately 3,700 m more than the 14,370 meters above ground level in the center of Lhasa. This means you can imagine how oxygen is scarce. People or travelers get mountain sickness and fall short of oxygen, hence oxygen is more in demand over here.

Lhasa is the capital of Tibet, yet doesn’t have an airport. The nearest airport which you can arrive is the Gonggar airport. Which is situated outside the city almost many km away. When you enter Lhasa there is a long tunnel in Quxu. And after one hour of a drive, you arrive in Lhasa!

Railway stations are accessible around China and Tibet which starts from Beijing to Lhasa and vice versa, this rail system is the longest but takes only 1-2 days to reach due to the non-stop speed.

It was the home of His Holiness Dalai Lama from 1649 to 1959, Due to conflicts that arose he had to leave his home and since then it has been a museum and, A world heritage since 1994. If you observe the palace closely there is a red palace and a white palace. The white palace is for administrative purposes and the red palace is for religious purposes. The Potala palace contains two houses of prayer on its northwest corner that preserve portions of the first structure

In 1645, after one of his spiritual advisers, Konchog Chophel (d. 1646), pointed out that the site was ideal as a seat of government because it is between Drepung and Sera monasteries and the old city of Lhasa. The external structure was build in 3 years while the interior, together with its furnishings took 45 years to complete. The Dalai Lama and his government moved into the Potrang Karpo (‘White Palace’) in 1649.

3) Why was the Potala Palace built?

It is 1,300 old since the Potala palace was built. As a gesture of love on behalf of the Tibetan king Songtsen Gambo for his marriage to Princess Wencheng of the Chinese Tang Dynasty. Eventually, monks came to rule Tibet and the palace was expanded and converted into the winter residence for the Dalai Lama.

Tens of thousands of people went there each year to give yogurt to the lamas and to ask for blessings. The Tibetan Opera troupes and wild yak dancing troupes all came to perform. In this way, the Shoton Festival began.