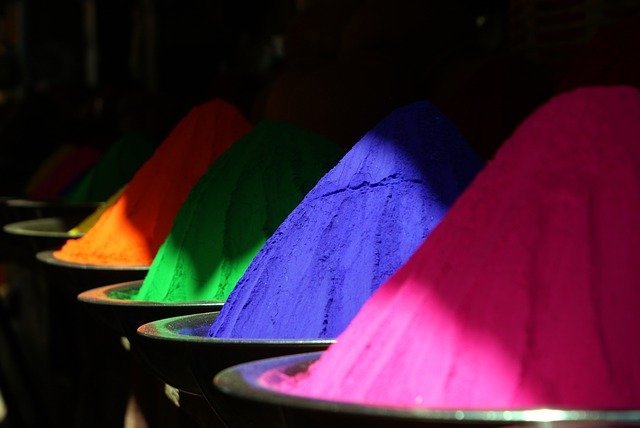 Color plays a pivotal role in the Hindu religion.  Every color has got its significance in Hinduism. Hindu artists paint their deities with colors depicting their qualities. Color can add happiness and joy to the life of people. Appropriate use of color can add happiness quotient in the life of people. Some of the main colors used in religious ceremonies are Yellow (turmeric), Red, Green from leaves, White from wheat flour, etc.

Different colors and their connotation

Colour Red signifies purity and sensuality. It also speaks about bravery, courage, and compassion. The red color is the most frequently used color during auspicious occasions like marriage, festivals, etc.   People put a red dot as tilak on the forehead during important occasions and ceremonies. Hindu women after their wedding put vermilion (which is also red) in their hair parting.
Red is a color of Shakti (Power). Deities in red attire and devotees during prayers throw red powder on them along with flowers. Deities like Goddess Durga adorn red Saree which depicts her power to destroy evil. She is brave, protective, and charitable. It is a bold color that symbolizes fearless nature.

For the Hindus, Saffron is the most sacred color. The Saints, holy men, and ascetics wear this color as it is a holy color. Rajput (the warrior caste) used saffron during the battles. This is also a symbol of purity. It represents fire which burns away impurities present in society. Saffron symbolizes the search for light.

Green is a color of happiness.  The environment is also green. It represents life.  Green is a festive color that cools and stabilizes the mind. This hue stands for peace purity and joy.  It represents the natural world created by deities. As nature shows us fertility, life, and rebirth, thus, all of these are the representation of the color green.

White is a representation of purity,  peace,  cleanliness, wisdom, and knowledge.  Goddess Saraswati wears white attire.  She is a goddess of knowledge who sits on a lotus and is a symbol of peace. In Hinduism, there is a culture of wearing a white dress to mourn the death of someone. Widows also wear white while mourning to reflect on the world and detach themselves from society. In Hinduism, White is considered ideal for praying for the departed soul.

Yellow is symbolic of the season spring when nature blooms, It represents life, happiness, light, and warmth, It activates the mind. Lord Ganesh and Krishna also wear yellow dresses.  Turmeric (which is also yellow) adds glow to the skin of the bride/groom during the marriage. It is auspicious for starting a nuptial bond. It symbolizes new beginnings and developments.

Blue is a color of calmness and tranquillity. Hindus view dark blue as the color of intuition, bravery, determination, cool nature, stable mind, and depth of character.  Lord Vishnu is often represented as blue-skinned who possess qualities like valor, ability to deal with difficult situations, protectiveness, etc.
The natural elements like Sky and water are also blue which symbolizes vastness, boundless and flexible nature. Lord Vishnu was also limitless or beyond people’s perception. He had an infinite aura.  In Hindu religious art, Lord Krishna and Rama (the two incarnations of Lord Vishnu) are represented in blue dress and have blue faces because of their ability to destroy inhumanity and restore peace on earth.

Therefore, Colour plays a pivotal role in creating an environment that enhances mood and well-being. In Hinduism, proper use of color is believed to keep people happy and cheerful. Each hue has got some significance and can affect our mood, feelings, and emotions. They seem to affect our mental, physical and psychological states.