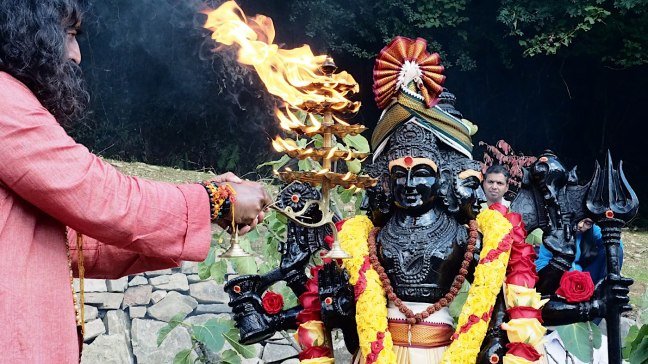 Prana Pratishtha refers to the ceremony or rite which infuses life in the image of God. This is called Consecration and is done by chanting mantras and hymns. Through chanting mantras, the priests invite the deity to be the resident guest. After performing the ritual the opening of the eyes of the deities takes place.

What is Prana Pratishtha?

‘Prana’ refers to the life energy whereas ‘Pratishtha’ means position or resting. In this context, the word when combined means installation or consecration.

The ritual involves typically a puja, chanting mantra in Sanskrit, bathing, and cleaning the idols of Gods and Goddesses. The pandits (priests) in the temple washes the feet of the deity (like a revered guest) arriving after a long journey.

After that, they dress up the idol and keep it seated in a comfortable place. They keep the idol facing the east direction.

Thereafter, the priests touch different parts of the idol which signifies the presence of various Gods as different sense organs like Indra as hand, Surya as eyes, and so on.

The main part of the ritual is the opening of the eyes of the divine with scented water and flowers. After this the consecration of the idol is complete.

The stone/metal/marble idols, be it in the temple or at the altar of home, should be installed with Prana Pratishtha and then the devotees should worship it. The ritual infuses life into a diety.

Who can perform Prana Pratishtha?

It gives the idols life energy so that the devotees visiting the temples get the vitalities from the divine figure. It helps the devotees to reach the higher realm of existence. As the process of this ritual involves cleansing of the Murti (idol), it removes all the negative energies present in the idol deity. Thus, the ritual induces positivity.

Difference between Pratishtha and Prana Pratishtha

People often tend to misunderstand the two. When one performs Pratisha regular maintenance is essential.

But, when one performs consecration with life energy, the deity doesn’t need regular maintenance. But, before the ritual, it is important to ensure the proper flow of energy from the person consecrating the idol (Murthi).

After the proper consecration of the idol, it needs no maintenance. Dhyanalinga is established through Prana Pratishtha and that is why it doesn’t need anything and is forever.

But, after Pratishtha the deities need proper maintenance failing which may cause harm to those who performed it.

After the completion of the ritual of Pratishtha, one should not neglect the idols otherwise it will be offensive. It should be maintained with proper rituals and processes.

If the deities are not well maintained they get angry. For instance, if one keeps Bhairav and Goddess Kali and does not follow the rituals properly they are bound to get punished.