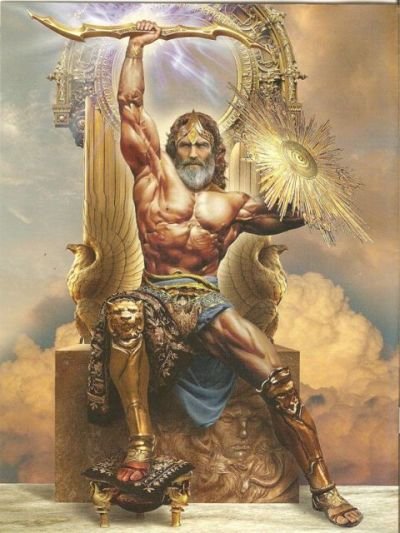 How Zeus became The Supreme God of Greek Mythology

According to the Greek Mythology, Zeus is the Supreme God. On his throne, on Mount Olympus, he reigns over the Universe. He is the son of the titans Cronus and Rhea. His father Cronus was the God who reigned before the birth of Zeus.

In a prophecy, Cronus foresaw that one of his sons would be more powerful than him and he dethrone him. To avoid this fate Cronus devoured his children after birth but Zeus manage to escape after his birth. To deceive Cronus his mother Rhea caused the Cronus to swallow a stone instead of the baby Zeus.

The war between Zeus and His Father

Zeus was secretly raised and breastfed by Amalthea. As an adult, Zeus challenged his father Cronus and freed his brothers Poseidon and Hades, who were imprisoned in Cronus’s stomach.

A great war between Gods and Titans broke out in a conflict that became known as Titanomachy which was a ten-year series of battles. After the victory over the Titans Zeus became The Supreme God of Greek Mythology. Zeus also shared power with his brothers.
Poseidon reigned over the seas, Hades ruled the underworld and Zeus commanded the Heavens & the Earth.

Advertisement
. Zeus also had a final challenge to face the powerful monster Typhon. He was defeated in their first fight with Typhon. but avenging himself he managed to defeat and imprisoned Typhon on Mount Etna.

As Lord of the Universe, Zeus worked to establish order and justice in the world. Zeus was associated with the duty of hospitality. The good hosts left Zeus very pleased and could be favored by him but those who disrespected that duty could be seriously punished by Zeus.

Zeus had several powers among them some are the ability to control the rains and storms. Using his lightning and thunder he showcased his power. Zeus was also able to decide the course of a battle. whoever was favored by God was certainly victorious. Therefore he is often represented with Nike the Goddess of victory in his hand.

The sovereign of the universe Zeus married the Goddess Hera. With the Queen, Hera Zeus had important children like Hephaestus, the God of Fires, and Mars, The God of War.
Zeus also had many other loves besides Hera. He fell in love with other several Goddesses, Nymphs, and beautiful Mortals. He had vast and glorious offspring.

With the Goddess Leto, he had the Olympic, The Gods Apollo, and Artemis.
With Semely he had Dionysus, The God of wine and ecstasy.
Zeus was also the father of famous Demi-Gods such as Hercules and Perseus. But Among all her children Athena, The Goddess of wisdom who was born out of Zeus’s head was his favorite.

Zeus took several different Transformations he became a bull to get involved with beautiful Europa. A Swan and a star seduced Leda. A cuckoo to conquer Hera and he Transformed many other forms like an ant, a bear, etc.

Once the Gods of Olympus revolted against Zeus and imprisoned him. but with the help of Rui Arias, the giant Hecate on Carys he managed to escape and put an end to the rebellion.

Zeus was venerated throughout the Greek world. One of the temples built in his honor was in Olympia. Inside this temple, there was an enormous statue of the God sculpted by Phidias. The most renowned sculptor of Ancient Greece. His work also became one of the seven wonders of the Ancient world.

The Olympic Games in the city of Olympia is a great celebration in honor of Zeus. In the arts, God is represented as a mature, strong, and majestic man with a crown of oak leaves and accompanied by an eagle the animal associated with God.

In Rome, God became known as Jupiter. His main temple was on Capitoline Hill. The most powerful of the Olympic Gods was worshiped throughout Europe due to the achievements of the Roman legions.

The cult of the Olympic Gods may have gone into decline. But the various myths of Zeus continue to marvel at people of all ages.

If you want to know more about Greek Mythology or other Mythology. Then Let Us Know in the comment box. Also, share these articles with your friends and family.