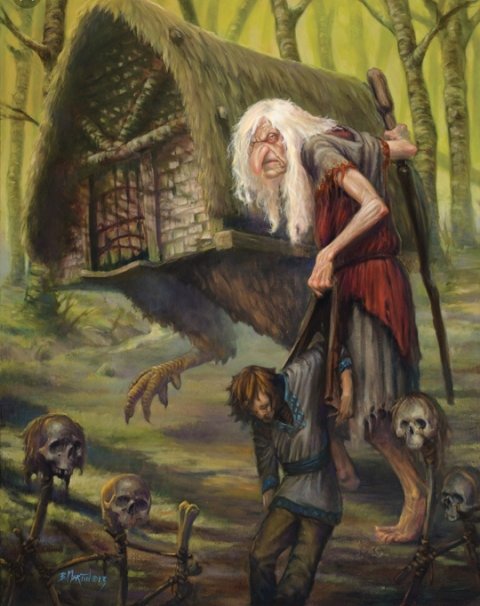 The Ancient People of Russia and Eastern European Countries shared beliefs and tradition which has been passed down through generations. In the various stories about Monsters and Mystical beings of Slavic Folklore, Baba Yaga stands out for his cruel appearance and odd customs. Baba Yaga is also known as the most dangerous witch till now.

It is a question for everyone when the legend of Baba Yaga appeared in History. It probably already existed in the Ancient Pagan beliefs and may have undergone some changes over time.

Baba Yaga is the archetype of Witches and Ancient Slavic Culture, but different from another version of Western beliefs. Baba is not only limited to making Spells and Condrens or flying on magic Broom Sticks.
Her appearance was almost repugnant. She had a long hooked nose, wide and cruel eyes, very wrinkled skin, a lean body, and an open malicious smile. Also, She was always bending forward and her old age made her look a bit frail.

Baba Yaga was very fond of devouring Human flesh especially young people. With this, she prolonged her lifetime.

The Ancient Legends say that Baba Yaga lived in confined the darkest forest. In the forest, she build a very precordial hut that was balanced by one or two chicken feet.
Baba Yaga’s malignant presence made her hut surrounded by dark vegetation with mass and poisonous Mushrooms. It was believed even wild animals avoided approaching such a dark palace.

Baba Yaga decorated her hut with human bones for showing the fate of anyone who dare to enter her territory. Baba Yaga’s hut was also protected by powerful magic whose main purpose was to keep the door closed. It was necessary to utter an enchantment to open that hut and that enchantment was

What Baba Yaga used for transportation

Baba Yaga used a large wooden flying pastel as a means of transportation and with the help of a straw broom, she headed in any direction. Baba Yaga rarely left her home and when she left home she usually looked for new victims or ingredients for her spells.

What happened if a person is captured by Baba Yaga

If a person were captured by Baba Yaga, they could still have some chance of salvation. For this it was necessary for that person to help her with some domestic chores such as cutting firewood, sweeping the floor, or preparing a meal. These acts of kindness could soften Baba Yaga’s, bitter heart. In return for these acts Captive Person could save his/her life.

Baba Yaga was not always the villain of the story. But In some of the stories she is shown as a mother figure. She helps those who suffered injustice in their life. Some people could also seek Baba Yaga’s help by asking for a trinket of protection or some healing spells. But It was important to be careful as it is a risk to trust the old witch too much.

we don’t know the origin of Baba Yaga but the Belief in Baba Yaga continues to be a wild spread in Slavic Culture today.

Who are The Seven Princes of Hell (Seven Demons)

1 thought on “Who was Baba Yaga (The Dangerous Witch)”