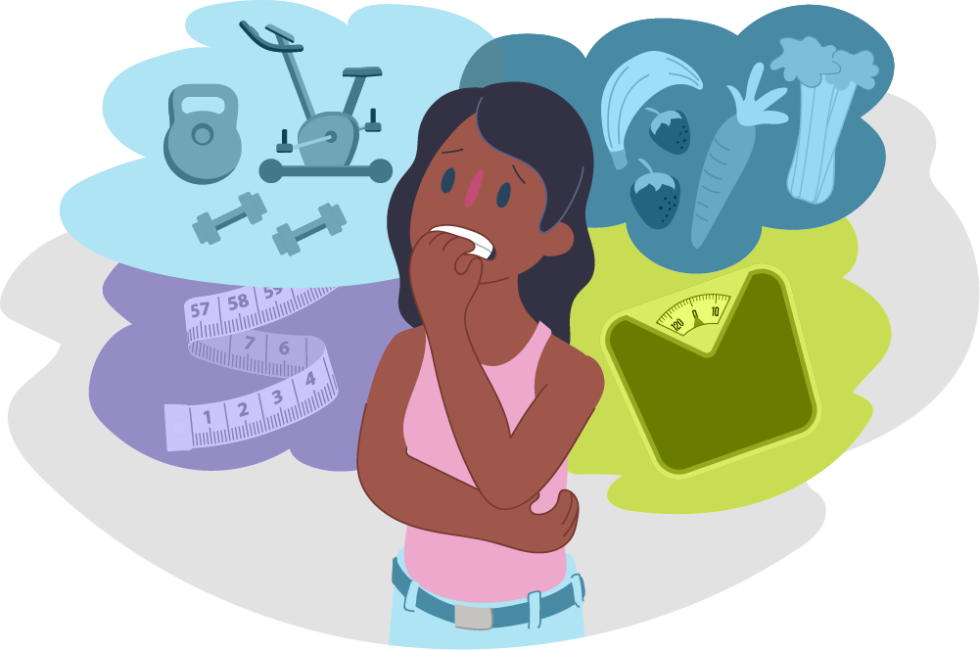 Have you noticed yourself going to the mirror and being unhappy with your appearance? Do you constantly think about the weight you could lose by not eating your favorite dishes for a few weeks? Do you find yourself comparing body sizes with celebrities? These tendencies are common among humans, adolescents in particular. It can be normal to some extent. But, there is a very thin line between normal and an issue requiring attention in such instances.
In an era where terms like zero size, diet pills, intermittent fasting, and HIIT workouts are becoming the new norm, we often fail to recognize when a simple habit can turn into a disorder.

What are ‘Eating Disorders’?

American Psychiatric Association (APA) has defined an “eating disorder” as a mental disorder defined by abnormal eating behaviors that negatively affect a person’s physical or mental health. There isn’t a clear-cut cause for these disorders to develop in a human being. However, both biological and environmental factors contribute to this.

Cultural idealization of thinness is one of the significant reasons that individuals develop symptoms. Practices like excessive exercise, restrictive diets, binging and purging, and constantly weighing themselves are a few of these symptoms. In addition, insecurity about one’s body image or even peer pressure can often lead to this condition.

Identifying such symptoms in us or the people around us and providing help is essential.

According to the Diagnostic and Statistical Manual of Mental Disorders, Fifth Edition (DSM-5) classification, eating disorders can be classified into the following types:

Anorexia Nervosa is an eating disorder where people have an intense fear of gaining weight. An individual with anorexia is constantly preoccupied with their weight. Hence, they employ extreme methods to control their weight and shape. Some of these practices include severely restricting/completely avoiding food groups like carbohydrates and fats, using laxatives, and vomiting after eating and exercising excessively. However, despite their abnormally low body weight, they continue to fear weight gain.

This is an extremely unhealthy lifestyle and can lead to life-threatening issues if it is not diagnosed immediately. As a result, it deprives individuals of self-confidence as they start equating their weight and size with self-worth.

These symptoms can be physical, emotional, or behavioral. However, it can be difficult for outsiders to notice these signs as individuals try to cover up their eating habits and low BMI.

Behavioral and Emotional symptoms include:

In bulimia nervosa, people tend to binge (eat large amounts of food) and then purge (get rid of the calories in an unhealthy way). Behaviors such as using weight-loss supplements, laxatives, and self-induced vomiting are the most common. Moreover, individuals might also resort to fasting after bingeing and strict diets to shed the calories. Unlike in anorexia, the individuals in this category have a normal or higher BMI (Body Mass Index).

Like anorexia, bulimic patients judge themselves harshly based on size and weight. This mental pressure can lead to a behaviour of stress-eating, which can cause the disorder. Besides that, genetic factors and learned behaviors can be contributing factors too.

The symptoms can vary among individuals depending on one’s gender, the severity of the disorder, and factors. Nevertheless, signs like frequent bingeing, purging, and feeling disgusted after eating are the most common.

Behavioral and Emotional symptoms include:

In addition to these major and common types of eating disorders, other varieties are also diagnosed. Rumination disorder develops in younger kinds, i.e., infants between the age of 3 and 12 months. However, it can lead to malnutrition and weight loss even in childhood/adulthood if it is not resolved. Here, the food is purged out after being chewed and swallowed. Further, the individual re-chews it and either re-swallows or spits it out.

In Pica disorder, an individual tends to eat non-food items that do not provide any nutrition. For instance, some of these substances are chalk, hair, paper, cloth, wool, or ice. This disorder is primarily diagnosed in individuals with mental illnesses like schizophrenia and learning disabilities. As a result, it can be fatal if it is not treated immediately.

Avoidant/restrictive food intake disorder (ARFID) was earlier known as a ‘feeding disorder of infancy and early childhood. Hence, it was only diagnosed in children under the age of seven. An individual suffering from this faces a lack of interest in eating or develops a distaste for food. Mainly due to specific smells, colors, temperatures, or textures. Also, it is essential to note that ARIFD is more severe than a common habit of picky eating/less food intake.

Seeking treatment for eating disorders is extremely important to reduce the risk of medical complications. Initially, it begins with therapy and regular health checkups, followed by medications and nutritional counseling. The most common type of therapy used is Cognitive Behavioral Therapy (CBT), wherein the individuals learn to recognize, accept and change distorted/faulty thinking mechanisms. In addition, medications like antidepressants or mood stabilizers are prescribed to help treat depression and anxiety.

Therefore, it is crucial that each of us regularly check our physical and mental state while looking out for our friends and family.