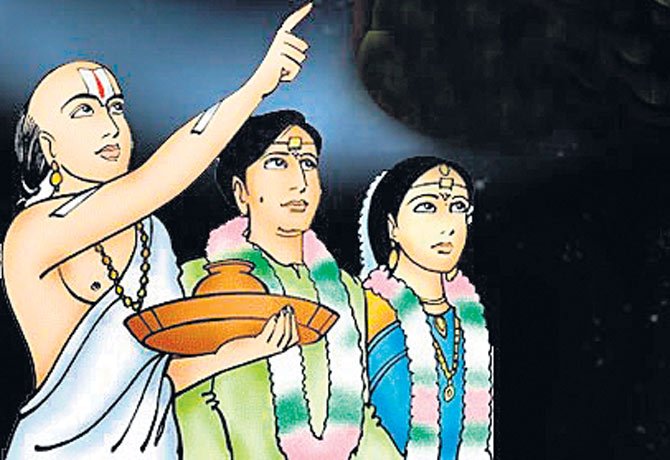 Arundhati is regarded as the wifely devotion in Vedic literature. It also considers her as a star (generally known as the morning star) found forming a double star with her companion. There is a practice in Hindu weddings, in which elders show the morning star to newly wed groom and bride. It is believed to be the symbol of conjugal love and loyalty in couples. Now in this article let us learn about the reason for this ritual and also some interesting facts about Arundhati.

Fact is that, many modern scientific inventions had been introduced by our ancestors thousands of years ago. Ancient Indians (age of puranas) worshipped Sun and other celestial bodies in the names of gods. With Sun as the central body and the same was proved ages later by the western world. Though it is a vast topic to discuss here, I just gave an example as it is related to this topic.

Whatever, Arundhati is the wife of one of the famous seven sages (Saptarshis), Vasishta. Indian Astro-science considers these seven sages as seven stars in Saptarshi Mandal. The same is related to stars in Ursa major constellation by the west. The star called Mizar represents Rishi Vasishta and its companion Alcor represents his wife, Arundhati. Further in this article let us read more about this ideal couple.

Arundhati is one of the nine daughters of sage Kardama and his wife Devahuti. She was married to Sage Vasishta, one of the Saptarshis. In her young age, Arundhati was tended towards learning and intellectual debates. Even after her wedding she continued to pursue knowledge. After all the chores Arundhati sat in her husband’s class and learnt what he taught his students. One such day, Vasishta was talking about dharma in his class. Then Arundhati requested her husband that she will teach students about dharma. With his permission and to his pleasant surprise Arundhati explained the concept very clearly. Elated by this, Vasishta approached Arundhati to help him in teaching from then on. Seeing this growth, Lord Brahma sent the magical cow Nandini to help the couple with their chores. It is when Vishwamitra met the couple at their hermit.

Vishwamitra was then the king of that kingdom. He once went on hunting in the woods where the sage couple lived. After a tired day, the king and his army visited Vasishta’s ashram for some food and water. To everyone’s surprise, the couple fed the guests with sumptuous meal. They also provided the King with robes that fit his status. Amused by this, Vishwamitra asked the couple how they managed to arrange royal feast and clothes in such a little time. Answering to this Vasishta said about Nandini and Brahma’s generosity on them. Then the king asked to send Nandini with him, but Nandini refused to go with the King.

As Vishwamitra forced the cow, many soldiers emerged from Nandini’s ears and killed the king’s army. Understanding his mistake, the king apologized Nandini and the couple. Furthermore, Vishwamitra gave up everything and went to pursue knowledge to become powerful. Along with the rolling time, the couple lived a happy life with their disciples. It was the day when Vasishta decided to go for a penance to Himalayas. Some of the students also followed him to perform penance.

Power of Love and Devotion:

As decided, Vasishta along with some of his students left to Himalayas to perform penance. While, Arundhati stayed back in the hermit with rest of the disciples. One fine day, a great famine hit the kingdom. There was drought and food scarcity everywhere. Vasishta learnt about the situation by his yogic powers. He prayed for the well-being of his wife as she was supposed to manage all alone in the ashram. Meanwhile, Arundhati also prayed for safe return of her husband as he was on top of the hills alone. After a few days, the students vacated the ashram due to famine effects. Arundhati continued to live alone. While she was engaged in her prayers, a young boy approached her and asked where he can find sage Vasishta.

Arundhati asked for reason and the boy explained saying “Mother, I am an orphan and starving. I came here to pursue knowledge from the sage”. Arundhati replied back saying about the penance and Vasishta’s absence. Continuing, she said, “there is famine everywhere, you stay here. If you are fine, I will teach you until the sage returns”. The boy agreed for the words and Arundhati served him the roasted seeds to eat. Praying for her husband’s well-being and teaching the boy the Vedas was her routine. After completing the penance, the sage returned to hermit with his disciples. He was extremely happy to see his wife in good spirits. He said, “the lord heard my prayers and looked well after you my dear wife”. Arundhati was also ecstatic about her husband’s safety. She said, “dear husband the lord heard my prayers too. He brought you back safely”.

Lord Shiva’s blessings to the couple:

Both Vasishta and Arundhati were happy about each other’s safety. Then, Vasishta noticed the boy and asked his wife about him. Arundhati narrated the whole story. As she finished narration, the boy manifested to Lord Shiva himself! The Lord had heard both their prayers. He turned to Arundhati and said, “I am charmed for learning Vedas from you. Your affection and devotion towards your husband are unmeasurable by earthly values. As time passes you will become a star in the sky along with your husband. And every married couple will look up to you”. He then turned to Vasishta and said “you are indeed lucky to have such a perfect match. You both will be an example of eternal love and affection.” Saying this the Lord disappeared.

Today, as a ritual in weddings, the Arundhati star is shown to the bride and groom. People believe that, the new pair get inspired by the couple. Also, Arundhati is the name synonymous to chastity and devotion with respect to married life.