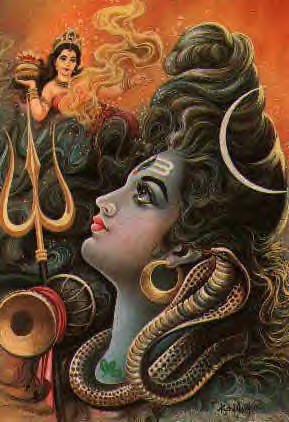 To all the people out there who have ever got A question in their head about why Shiva wears a snake around his neck? I’m sure you have thought about this at least once. As curious it is, we all do wanna know How did the snake land up to our God’s neck! To know more, read the article till the end.

Lord Shiva is known to be a Meditative, fierce, and Boon-giving out of all the other gods. The one who penances and meditates even after being a god himself makes him the best and worshipped. Shiva is often depicted meditating while seated on a tiger’s skin, with a third eye on his forehead. He adorns himself with the snakes around his neck and the crescent moon on the forehead. I’m sure these descriptions made you Imagine Shiva. Right?

The Snake adorning shiva is Named Vasuki… let us see how Vasuki stayed with Shiva throughout.

Vasuki was one of the serpent sons who was an ardent devotee of Shiva. Evidently, He was a Nagaraja which means a serpent king and ruled a region near the Kailash Mountain.

Without Shiva, Vasuki has no life.

How Did Vasuki reside over Shiva’s neck?

Samudra Manthan or the (churning of the ocean) was organized to produce the Amrit or the nectar of immortality, which would re-establish the glory of the God. Vasuki, the kind of serpents was used as a rope around mount Mandar or Mandar Parvat to churn the ocean. The demons or asuras held Vasuki by the neck and the devas or gods by the tail. While churning, a lot of poison or Halahal oozed out. This poison had the potential to destroy the whole world. To save the world Shiva decided to drink all the poison.

Undoubtedly, Shiva is selfless and sacrifices as He drinks all the poison, Due to the poison his neck starts becoming blue. It is then his wife Parvati comes through his rescue and through he Mahavidya– she keeps her handheld over Shiva’s throat to stop the poison spread to all parts of his body. But Parvati couldn’t hold his throat forever too!

Seeing this, Shiva bhakti – Snake Vasuki offered himself in service of Shiva and sat around his neck. It is from this very incident how Shiva derives his name “Neel Kanth” and Vasuki stays on shiva forever protecting him from the poison.

What Does The Snake on Shiva Symbolise?

Hence Shiva wearing a snake on his neck signifies that he had complete control over his mind and desires. Kundalini Shakti which is the dormant energy residing at the Muladhara or root chakra is also symbolized with a serpent. Once activated this energy like a serpent rises upwards towards the head and leads to enlightenment.

The snake represents the Ahamkara (ego).  When we poke a snake, it recoils instantly and spreads its hood to attack us. Similarly, when someone says something that we don’t wish to hear, our ego spontaneously reacts. This ego lies inside the human body whereas, in the Gods and the Goddesses, the ego becomes powerless. It doesn’t affect them because they govern it. Hence, Shiva uses this Ahamkara as an ornament because it doesn’t find space within his body. The Lord monitors the Ahamkara or the ego that otherwise makes us hollow from within.

Shiva is also known as Bairagi (or Vairagi), meaning he is above the mundane world. He doesn’t fear anything as he is above all emotions. A snake that is deadliest to us, is nothing but a harmless being for Shiv, who is invulnerable.

Snake also symbolizes Alertness- Which is A Characteristic Of Lord Shiva.