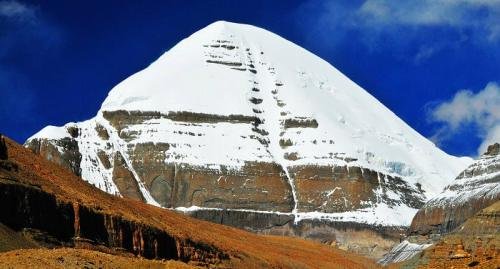 Why one should visit Mount Kailash at least once in lifetime?

Mount Kailash is known to be the abode of Lord Shiva, who resided there along with his wife – goddess Parvati and their children, Ganesh and Kartikeya. Different religions believe Mount Kailash differently. It has been said that Shiva still meditates in this mountain and once you visit this place all your sins disappear. I’ll now be describing reasons as to why one must Visit Mount Kailash During their lifetime.

Why Visiting Kailash is more than gaining a Religious benefit?

When you come here to Kailash it is more of a Spiritual Gain. Since your heart, soul and mind all attain spiritual gain and Go at a state of peace.

Many Kailash Travellers say that you hear sounds of “Damroo” as you go closer to the Mountain. The water which flows between Kailash is said to be very pure. The East cliff of the Mountain is also said to have an Ohm which is seen During Snowfall. Travellers also say that there is some kind of Radiation from the Mountain and you don’t notice how time flies. No Mountaineer has ever climbed Mount Kailash till now except The Pandavas. It is known that a Tibetan saint known as Milarepa is the only one to climb the summit till the top.

Manasarovar lies around 14, 950 ft, is considered the highest freshwater body in the world. It’s said that before Kailash Yatra, Pilgrims visit Manasarovar in the early morning and Dip inside the Lake at 5 am to wash all their sins away. In Mythology it says that during this time even the Gods and Goddesses used to Bath here.
While Mansarovar has a deep spiritual significance, its antithesis, Rakshas Tal, was born of the intense austerities performed by the demon King Ravana to please Lord Shiva. For its close association with a demoniac entity, the Rakshas Tal Lake is endowed with salty water and deprived of aquatic plant life and marine life. This place is serene and You get to see Glimpse of Kailash Distinctly. People break down and attain a different feel and connect towards God.

Benefit of Walking around Kailash Parvat

Walking around the Kailash or Parikrama around the Parvat Makes one’s body energetic. Once the Parikrama is done, there are Beautiful sceneries which capture your sight, and one attains Moksha and is forgiven all his sins. It’s believed once you do Parikrama here you Directly go to Heaven.

How to reach Mount Kailash?

To reach Mount Kailash, one must take a flight to Lhasa, the capital of Tibet (autonomous) and take another private flight from Lhasa to Ngari Kunsa Airport. Busses are available from certain parts of India and China, Nepal or Uttarakhand.
The journey starts with the “Yama Dwar” a temple where the travellers pray in the temple the exact place where the yatra starts. The Pilgrims are very excited for the trek, they stay in tents and the parikrama lasts for 3 days. They eat noodles and anything which is instant. The weather in Mount Kailash can drop to – 18 and freezing in the night. There is a guesthouse right opposite to the mountain. The morning sunrise is a bliss to watch, with golden coloured gold – like mountain. During a day it become cloudy at times and is snow covered throughout the year.

The astonishing feature is that the Mount Kailash is the centre of the Earth which we look as a whole so it acts like an axis. There are many theories made by scientists and no one climbing up the mountain still remains a mystery.

Could there be any possibility if there is another world inside Kailash?
Is it just highly radioactive where machines are in the mountain? is it man made or artificial?

These are all the theories which arise from the scientists. Hopefully in the coming years we discover what Kailash is and go on a yatra and discover Shiva and understand who he really Is.

Is Mount Kailash the way to heaven ?

3 thoughts on “Why one should visit Mount Kailash at least once in lifetime?”