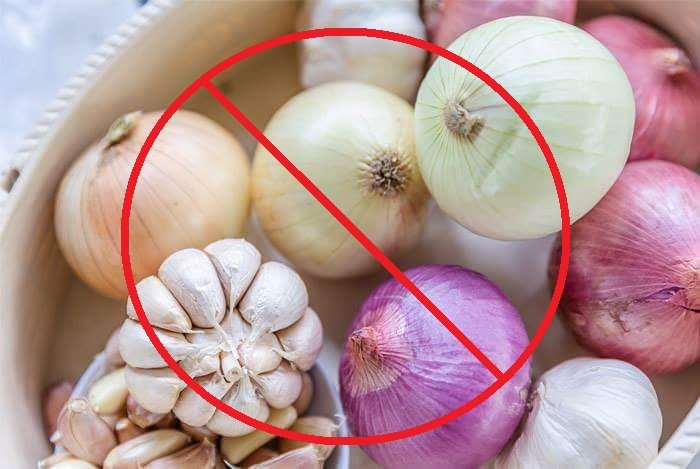 Hinduism prohibits the consumption of Onion and Garlic on auspicious days. It is also completely prohibited from consumption by Vaidiks (sanyasis, priests and their students). Isn’t it surprising that in spite of being veggies they are not a part of a traditional Hindu meal? Offerings made to God also shouldn’t contain onion and garlic.

Have you ever wondered why? This article will help you know both spiritual and scientific reasons regarding why these two vegetables are prohibited.

The Story Of ‘Samudra Manthan’

During Samudra Manthan, it was decided that whatever is obtained from the ocean will be distributed equally among Devas(demigods) and Asuras (demons). However, a fight arose between them when the Amrit (the nectar of immortality) was obtained. Both of them wanted the whole of it without giving it to the other party. The Asuras were first in initiating this quarrel. In order to settle this issue, Lord Vishnu took the Mohini Avatar. He incarnated as a beautiful and charming woman. He knew that this was the only way to divert the attention from the asuras and control them. However, the Devas didn’t fall into this trap. They were fully aware of Vishnu’s Maya. They realized that this is being done for the betterment of the Universe.

Mohini sent the Asuras to have a bath before consuming the divine Amrit. In the meantime, Mohini arranged two pots. Filled one with Amrit and the other with a liquid that looked like Amrit. Then she instructed devas and asuras to sit in separate groups on either side. In this way, she was feeding them from these pots. One pot had original Amrit (for devas) and the other had the other liquid which was fake Amrit. Vishnu knew that if Asuras attained immortality they would live forever and cause problems for mankind every now and then.

However, an Asura named Swarabhanu happened to get a doubt. He noticed something was fishy. So, Swarabhanu disguised himself as a Deva and sat in between Surya and Chandra so that he can also consume Amrit. He was fortunate that he could drink a few drops of Amrit. But, very soon Surya and Chandra came to know about this and raised an alarm and informed Mohini. Mohini (Vishnu incarnate) slaughtered Swarabhanu’s head by Sudarshan Chakra. But since Swarabhanu had already consumed Amrit, he did not die. His head and body lived as two different individuals. The head got the body of a snake which is Rahu. The other part of the body which was headless got the hood of a snake which is Ketu.

Origins of Onion and Garlic

During this entire incident, drops of blood spilled from the head and body of Swarabhanu. It was from this blood of the head and body of Swarabhanu that Onion and Garlic plants grew. Hence these plants are rich in Tamsik guna. Tamsik guna is an Asuric/demonic feature. Devotion to God, Anusthan, pooja, and kirtan requires Sattvic guna. This is why we shouldn’t consume onion and garlic on auspicious days. Vaidiks, priests, and sanyasis shouldn’t consume these food items at all as they have to maintain a Sattvic diet throughout their life.

Swarabhanu had consumed Amrit prior to beheading. Hence these vegetables also contain few medicinal properties. Eating onion and garlic is beneficial for Blood pressure and heart patients. Onions help in the dilution of blood and prevents heart attacks. It is also anti-biotic, anti-fungal, and anti-allergic. It is beneficial for joint pain patients as well.

Jaina culture is much more intolerant to these foods compared to Hinduism. As it increases sexual tension of the body by triggering the concerning hormones, it becomes difficult for one to focus on spirituality. Even Buddhism prohibits consumption for similar reasons.

Greek culture says that consumption of these items aggravates body pains. It has a heavy impact on our brain and destroys inner peace and tranquility. Romans were also strongly against these foods. Those who sold these veggies were socially boycotted. Only the lower sections of a Roman society consumed onions, garlic, and mushrooms. These people were considered outcastes. A similar situation was seen in the Egyptian culture as well.

According to Turkish mythology, when the devil was thrown out from heaven and as soon as he kept his left feet out garlic plants grew and onions grew where he kept the right feet. Hence it is considered impure in Turkish culture as well.

17 thoughts on “Why Are Onion And Garlic Prohibited On Auspicious days?”