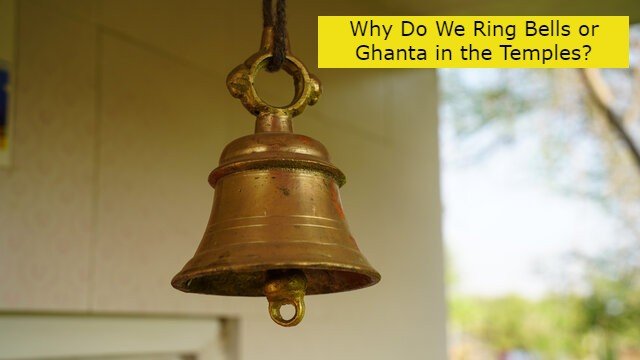 Why there are bells in temple?

We know that bell is also called as ‘Ghanta’ in Sanskrit which is situated at the entrance of any temple. Ringing the bell which is made up of metal is a very crucial part of having ‘Darshan’. Priests also ring the bell while doing ‘Aarti’ and while indulging and flower plating. The bell is contrived of mainly seven valuable metals and each metal signifies one of the planet of our solar system such as Lead signifies Saturn, Iron signifies Mars etc.
So have you ever wondered that why always there is a bell situated at the entrance of the temple. By reading this article you will get to know this.

History of ringing the bell or Ghanta

There is a history behind the ringing of the bell before entering the temple which you will find very interesting. This a story before the starting of Mahabharata. We all know that Lord Krishna was supporting Pandavas and want King Jarasan to support them during the war. The King Jarasan always fulfills all the wishes falling into his ears during sunset which is the time of prayer. So he arranged a guard that will prevent all the people to come into his room at that time so that one should not take any advantage my making him fulfill their wishes.
Lord Krishna was aware of it and went to meet the King during the sunset. The guard was opposing him to enter the room by saying that nobody is allowed to enter the room during this time then Lord Krishna told him to let him enter into the room and in return to this he will fulfill his one wish then the guard agreed to do so and Guard wish was to be Lord Krishna’s guard which he approved and then the guard allowed him to meet the King. For the guard it was a great opportunity and a very honorable thing to be his guard. He told Lord Krishna that no one will be allowed to meet him without his sanction and the guard’s sanction was believed to be the ringing of the bell.
So, it is believed that the guard held the bell so that Lord Krishna can pay attention to the prayers by the people only after the bell is rung.

Significance of bell or Ghanta

It is generally said in Hindu religion that ringing a bell apprise the God about our entrance into the temple. It gives invitation to holiness and extricate your persistent opinion making you more perceptive and can bring positive energy around you.
When we ring the bell during praying, it’s awning sound will make us more attentive and also plays a big role in concentrating our swerve mind that always wanders from here and there. The main reason for situating the bell at the entrance of the temple is to make you conscious or to awake yourself.
There is also the use of fragrant sticks or any other fragrant producing materials and lamp lights in the environment for our consciousness that make us ready to start our prayer. It also eliminates negative energy that may be present in our surroundings.

When you get awaken by the sound of the bell, for a particular period of time you will feel to be taken in the prayers and mantras of God and you can absorb maximum positive energy from your surroundings.
According to Kundalini Yoga viewpoint, the echo produced by a bell which is sharp and for few seconds, stabilizes the energy of our body and also vitalize all the seven chakras of our body and makes us feel calm and energetic.

Scientific reasons of bell or Ghanta