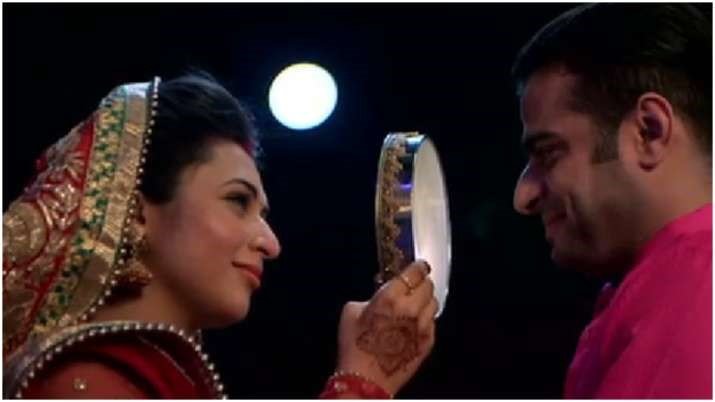 Karva Chauth falls on the 4th day after Purnima on The Kartik Month. Like many Hindu festivals, Karwa Chauth is based on the lunisolar calendar which accounts for all astronomical positions, especially positions of the moon which are used as a marker to calculate important dates.

On Karwa Chauth, married women, especially in North India, observe fast from sunrise to moonrise for the safety and longevity of their husbands.

Do you know that Indian woman don’t consume a drop of water and food throughout the day? Its shocking yet so sacrificial! The word Karva means “earthen pot” and chauth is Chaturti. On this day woman Do the pooja and offer prayers to Lord Shiva. Before the moon rise, and offer prayers to moon and resemble the moon to husband after the moonrise, also the earthen pot is as an offering to moon – hence Karva Chauth.

The Story Behind Karva Chauth…

There are many stories related to Karva Chauth festival, but the famous ones are the story of Veeravati and the story of Draupadi. Long time ago, There was a Bramhin named Ved Sharma who married Leelavati – The couple with 7 great sons and A daughter Veeravati.

According to one such legend, there was a beautiful queen by the name of Veervati. She, married to a handsome king. During the first year of her marriage, she observed her first Karva Chauth by observing a strict fast.

As the night drew closer, she started feeling uneasy due to severe thirst and hunger. But she refused to eat or drink anything. Her brothers could not watch her suffer anymore and decided to do something about it.

Her brothers created a mirror with the pipal tree in their backyard and tricked Veervati into believing that the moon had risen. She believed them and broke her fast. While she was having her dinner, she faced bad omens, Like first bite, getting a hair inside a plate, sneezing second and third bite she heard a news her Husband was dead!

Veervati was completely devastated and started running towards her husband’s house. On the way, she is stopped by Lord Shiva and Maa Parvati, who explain how her brothers tricked her. Maa Parvati cuts off her own finger and gives Veervati a few drops of her own holy blood.

She instructs Veervati to be careful during her next fasts. Veervati sprinkles the holy blood on the dead body of her husband, who is then miraculously brought back to life. In this way, Veervati was reunited with her husband due to her immense love, sacrifice and devotion. This shows how Karva Chauth is important traced right back from history.

It is believed that Draupadi also did the fast for the longetivity of her husbands. One day when Arjun went for penances in the Nilgiri hills, the rest of the Pandavas faced a lot of issues. Now, Draupadi remembers Krishna’s saying to perform the Karva Chauth. So the next time she performs karva chauth, all the problems and hardships of the Pandavas disappear.

How Do Women manage without food ?

According to Hindu tradition, Karwa Chauth is one of the most important festivals, especially for married women. It begins with a small early morning prayer and is usually followed by “Sargi” – a food platter containing dry fruits, parathas, curry and coconut water.

Women consume Sargi after their bath as it is believed to be a healthy meal that allows them to prepare for the day’s fasting. It keeps them energetic and allows them to stay without food or water for the entire day.