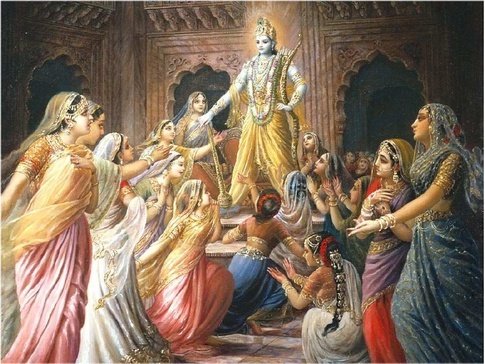 We all know and term Krishna as Radha – Krishna, but do you know that among Krishna’s wives Radha doesn’t exist. The fact is that Radha and Krishna do not get married.

Proper understanding of the marriage pastimes of Lord Krishna can be gained by learning the Srimad-Bhagavatam. In which the great sage Shukadeva Goswami has narrated. In marrying 16108 queens, Lord Krishna exhibited His immeasurable opulence. Lord Krishna is the original Supreme Personality of Godhead. To marry so many queens and maintain them in great while keeping them fully satisfied is nothing wonderful for him. No other person in existence can achieve such a feat of opulence, power, and perfect marital harmony.

“Once Draupadi enquired from Krishna’s wives, How did lord Krishna marry them?

Spoke first, Many kings headed by Jarasandha intended my marriage with Shishupala. Even brother Rukmi was in favor of this marriage. All the kings stood with their Bows so that there is not an interruption to this marriage. Lord Krishna came abducted and took me Dwarka.

Queen Satyabhama told when my uncle Prashena was killed, my father Satrijith falsely accused Krishna of this, to clear his name Krishna defeated Jambavan recovered Syamantaka’s jewel, and returned to Satrijith. My father is a great honor to present both the jewel and myself to Lord Krishna.

Queen Jambavati said when Lord Krishna entered my father’s cave in search of Syamantaka jewel. At first, my father Jambavan did not understand who he was, they fought for 27 days and nights. when father became weaker he then recognized the lord, he took hold of Lord’s foot and he presented me and the Syamantaka jewel.

Queen Kalindi told me to obtain Krishna as my husband I performed severe austerities, then one day lord Krishna came to me in the company of Arjun, at that time lord agreed to marry me. Kalindi is the personified Yamuna who desired to marry Lord Krishna which was fulfilled by him.

Queen Mitravinda said at my Swayamvara ceremony Lord Krishna came forward, defeated all the kings including my brothers who, who dared insult him and took me away. Consequently, Krishna, the shelter of the goddess of fortune brought me to his capital city.

Queen Satya said my father arranged Swayamvara with seven extremely powerful bulls to test the power of the kings who desired my hand in marriage. Lord Krishna manifested himself in seven forms and easily put a noose around the seven bulls. Thus, he won me with his valor. Took me with maidservants and a full army of four divisions defeating all kings who opposed him along the way back to Dwarka.

Queen Bhadra said to Draupadi, of his own free will my father invited his nephew Krishna to whom I have already dedicated my heart and offered me to him as his bride. Because of that, My father presented him with one Akshouni military guard and retinue of my female companions.

Queen Lakshmana said to Draupadi, Oh queen I repeatedly heard Nardhamuni glorified the appearances and activity, and thus my heart also became attached to that lord Mukund. My father Brihatsena, by nature, was compassionate to my daughter, and knowing how I felt, he arranged to fulfill my desire. Lord Krishna won me in the Swayamvara, by acing an archery contest which was not successful to Duryodhana Jarasanda and even to Arjuna the best Archer who participated in the Swayamvara. Lord took me to Dwarka for our lavish wedding.

Queen Rohini Devi representing all the other queens explains that they were the daughters of various kings defeated by Narakasur (Bhaumasur) the demon who had held them captive during the conquest of earth. After killing Narakasur and his followers, the lord found us in the demon’s prison.

Out of the 16,100 wives, Rohini is the head of the wives to safeguard their dignity.

The king of heaven Indra once came to Dwarka to complain to Krishna about the cruel activity of the demon Narakasur who used a portion of their property. Krishna mounted his eagle carrier Garuda along with Satyabhama and went to attack the capital of Bhaumasur called Pragjyotishapura, he destroyed the strong fortification of the city and killed Bhaumasur, the son of mother earth. She offered praise to Krishna and returned the property to Krishna and also the celestial earing of Aditi the mother of Lord Indra.

Hence, Lord Krishna built 16108 opulent palaces for the queen and lived like a perfect householder with his wives in 16108 different forms.  The queens would serve the Lord all by themselves and Krishna would respond like a perfect husband

The True identity of Lord Krishna and the queens is not of ordinary human beings instead lord Krishna is the supreme personality of Lord Vishnu and all queens are the expansion of goddess Lakshmi.