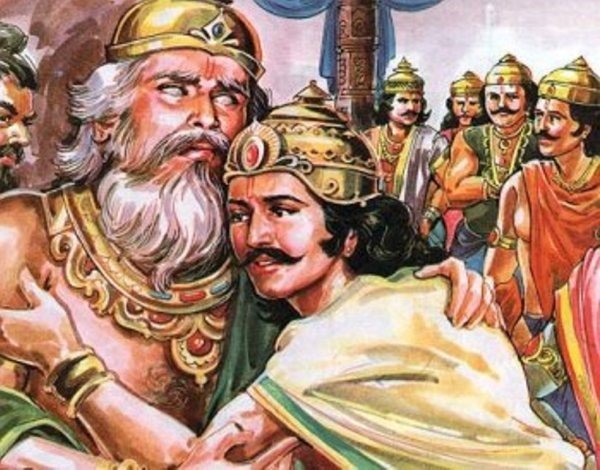 Who was Yuyutsu? How did he manage to survive among the Kaurava’s?

A look back at History

In Mahabharat, Maharaj Shantanu had two son’s Dhrithrasthra and Pandu. Gandhari, a princess of Gandhar empire married the elder son Dhritrasthra. Gandhari had a boon from Dwaipayana Vyasa that she could conceive 100 children, but was pregnant for a long time and this made the king unsure about the birth of 100 children. So Gandhari’s maid Sugadha was taken to conceive a child. Later Gandhari delivered a ‘mass of flesh’ which was later taken as a source of birth for the hundred boys and one girl Dushala – 101 in total.
Yuyutsu was the son of Sugadha and Dhrithrashtra following their step siblings the elder one Duryodhan.

How Yuyutsu Chose Dharma over Their Brothers?

‘If you think that the Kaurava’s didn’t survive in the battle, well there was one who did!’. He Yuyutsu, the name basically means “wishing to fight”.
Unlike the other step siblings, Yuyutsu was different. He knew what was right and what was wrong.

Who was Yuyutsu? How did he manage to survive among the Kaurava’s?

He had immense respect for the Pandav’s elder son Yudhistir and never had any enemity towards the Pandavas. During childhood when Duryodhan was planning to poison and kill Bheem. Yuyutsu tried to give hints to Bheem that Duryodhan was about to kill him. But later Bheem becomes poisoned and is thrown inside the water. He later becomes immune to any poison and gets the strength of 100 elephants by the snake god underwater. Yuyutsu was trained under his Grandsire Bheeshma and had similar characteristics to Vidur as both were the sons of daasis, both were intelligent and wise who took wise decisions always.
In the entire Mahabharata This person isn’t much known, but still he has played a big role entirely. He is also known to be the last one to survive from the Kauravas in the war and the one who taught Parikshit, The Grandson of Arjun.

Some Interesting Facts about Yuyutsu:

We all know that there were more people with the Kaurava’s during the Kurukshetra battle, as compared to Pandav clan. In the middle of the battle, Yudhishtir asks “If you think what I am doing is not Dharma then you can leave my army and go to the Kauravs”, suddenly From the Kaurav Army Yuyutsu joins the pandav clan and goes against the evil and Goes against his own brothers.

In the battlefield Bhishma doesn’t stop Yuyutsu and the battle continues, With the victory of The Pandavas, Yuyutsu has set an example to most of the people to walk in the path of Dharma.

After the Mahabharat, He teaches Arjun’s grandson Parikshit, to rule after Yudhishtira’s legacy in the Kindom of Hastinapura. As a character many people are yet to know who Yuyutsu is and it is indeed important to throw a light on him, although he isn’t famous unlike the rest. He is one of the most Important people who established Dharma.