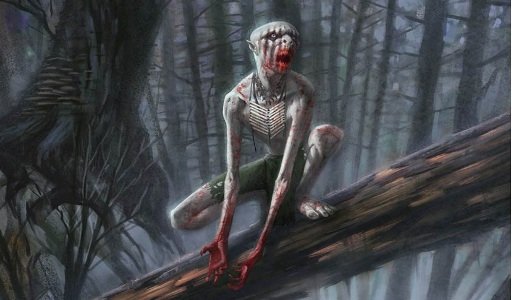 Who is Wendigo? (Monstrous Creature of Folklore)

The Ancient beliefs of Native American peoples mentioned the existence of a creature that appeared to be the incarnation of a nightmare. The name of this creature is Wendigo.
This terrible monster lived in the Icy forests of North America. In the forest, it wandered in search of new victims which it devoured to the bone with pleasure.

This creature was a curse for fear and concern, especially among the Algonquian Tribes who inhabited Northeastern North America near the great lakes region.

According to the legend, Wendigo is a macabre creature that lives in the material and spiritual world. It often resembles a human being in distorted forms or can also have animal characteristics such as horns and sharp claws.

If the appearance of this creature was not already frightening enough. It can also assume a spiritual form and possess a person’s body making them behave violently and cruelly.

Which Type of Person becomes Wendigo?

It was believed that This creature emerged in the world when an awfully bad person committed heinous crimes such as murder or cannibalism. And when that person dies they return in the form of a Wendigo.

Characteristics of this creature

This creature already has the Characteristics of a perfect hunter. It is tall, slender with claws and teeth
capable of tearing flesh. It can also camouflage itself and imitate the human voice to attract its victims.

Since It is associated with negative behaviors and thoughts hence Wendigo represents the worst in human beings. Evil can take on a grotesque physical form.

What Things This creature do Search for?

Even though they are always searching for food but they always remain hungry and thin. The skin of their icy bodies is always remarkably close to the bones. When a Wendigo manages to devour a human being it instantly increases in size. Thus it will never be able to completely satisfy its hunger.
For this reason Wendigo also represented the difficult winter months.

According to many Ancient Peoples, This creature brought hunger and cold with them which Often led to the despair of cannibalism as a means of survival in villages.

How Wendigo is related to Medical Term?

The belief in Wendigo even originated the Medical term Wendigo Psychosis. A syndrome where a person feels an uncontrollable desire to eat human flesh.

Wendigo kills which type of People?

Although It was a frightening legend. But It was a warning for people not to cultivate the feeling of greed. And above all that they can control their violent impulses. Otherwise, they would be the first to be hunted by this creature.

How Lilith The First Wife of Adam became Demon