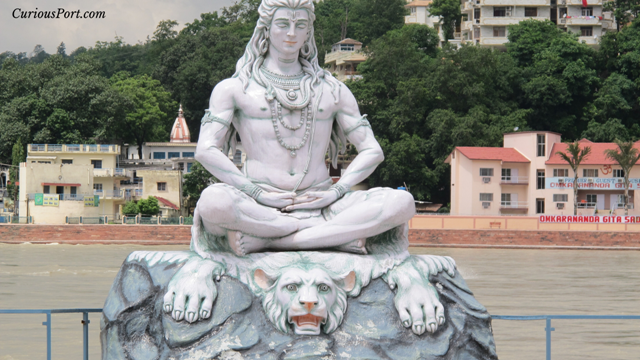 Who gave Damru, Trishul, and Nag to Shivji?

In Hindu religion, all the Gods, whether it is a God or a Goddess have something special or are connected to them, like Sudarshan Chakra with Vishnu Ji, Trishul with mother Ambe and Lotus Flower with our father Brahma Ji Likewise with Mahadev, who is God of all Gods Damru, Trishul, Nag and other things like the Moon at his head and Mother Ganga in Jata.

As we meditate on Shiva, an image of Vairagya Shivji in front of our eyes with his Damru, Trishul, Nag begins to emerge. When we go all over India or anywhere in the world and see the idol of Shiva in the Shiva temple or in the pagoda, then Damru, Trishul, and Nag with that Shiva idol must surely be with them. Did all these things appear with Shivji or did they come to him from somewhere and went to join him, where did all these Damru, Trishul and Nag come from Shivji, why did Shivji have all these other gods or Why do the other gods not have all this?

So today we will tell you where the holy things Damru, Trishul, and Nag came from and what is the connection of these holy things with Lord Shiva.

How did Shiva get Trishul?

Lord Shiva is the master of the best weapons. According to the mythology, according to the Shiva Purana, a legend has been told that Shivji himself is the creator of the bow and trident itself. Shivaji himself invented the bow and first used the bow but then the trident There is no story related to this Trishul from where he came to Shiva but according to Shiva Purana, it is believed that when Shiva appeared from the universe at the beginning of creation, then he had three qualities with him Raj, Tambh And sath had also appeared, the same three qualities became the three shuls of Shiva i.e. Trishul, without these three qualities, it was not possible to create a surgeon and reconcile the creation, then Shivji tied all these three qualities and with all the three elements together Trishul was made and it is also said that this special trident was given to Lord Shiva by none other than Srihari Vishnu himself.

How did Damji come into Shivji’s hands?

The story of Lord Shiva’s Damaru is very interesting. It is believed that when Goddess Saraswati appeared at the beginning of the creation, she gave the sound to the creation with her veena, but there was no sound or music in this sound at that time. Lord Shiva played the damru fourteen times while dancing and the sound of music was born in the creation of that damru.
It is said that the damru in the form of Lord Brahma himself, which is far and wide as it comes closer.

How did the snake reach Shivaji’s neck?

The name of the serpent in the neck of Lord Shiva is Vasuki.  It is said in the Shiva source that this serpent is the king of the Nags and he rules the whole Nag Lok. It is said that Vasuki Nag was an ardent devotee of Lord Shiva, pleased with the penance of Vasuki, Lord Shiva made him the king of Nag Lok and also took him as an ornament around his neck. Grew even further and the king of Naga Loka Vasuki also became immortal.

So, friends, this is the story of Lord Shiva holding the Damru, trident, and the serpent. If you like it then comment Bholenath in comment section.