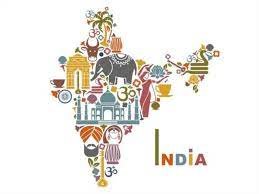 From Rich culture to amazing cuisine and to so many different Architectures. The population of over 1.6 billion people is incomplete to the world.

Having the World’s largest Democracy, India also has the third-largest economy. The place where so many religions live together in one land without any dominance or any wars, the people talk to one another and celebrate every festival together. The same is thought of in schools and families of every Indian Household.

Indians is so diverse in terms of culture, religion and intellect! unlike every other countries

2) There would be No Cakes or Cookies to Binge

Yes, you heard me right! India invented the sweetness you see in every dish you eat. Thank India for the sweets, cakes, cookies, candies you are eating. They were the first to invent sugar in the year 350 AD! Through the process of :

Extraction and purification of Sugar from Sugar canes

Ever since the 350 AD, India has been adding enormous amount of Sugar in deserts , almost 20 kg per capita. Famous Sweets which were invented are Ladoos, Halwa, Phirni which are the oldest.

Indian men know how to impress their lady, especially when it comes to diamonds to win her heart. Diamonds are the finest jewelry that was first recognized in India, diamonds have been known in India for at least 3,000 years but most likely 6,000 years.

In fact, until the 1730’s India was the world’s known source of diamonds.

One famous Diamond is Kohinoor, But the Crown of Queen Elizabeth (later known as the Queen Mother) in 1937 for her coronation as Queen consort. Took this Diamond, now Found in London to date.

Taking inspirations from Holi, Color Run – introduced, where everyone applies colors to each other.

5) Birth of 4 Major Religions, was from India

Hinduism is the most abundant religion spread in India, following Islam, Christianity and Buddhism and many more.

But the birth of four Religions – Hinduism, Buddhism, Jainism, and Sikhism have originated in India.