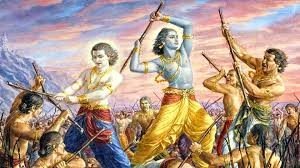 We all know about what happened during the Mahabharata War, who participated, and how many lost their life. But do you know what exactly happened after the war ended? I’m sure you are curious about knowing what would have happened.

Gandhari is very angry because Krishna took Pandava’s side and made their army more powerful with his divine power. The fact that Krishna didn’t take Duryodhan’s side for Kaurav’s clan and destroyed everyone in their clan, makes Gandhari angry and curses Krishna that his city “Dwarka will submerge in water and The Yadav clan will no longer be there”.

2) Yudhishthir Is the King of Hastinapur

After years of exile, injustice towards Pandavas, Draupadi’s Cheer Haran, and all the wealth they had never experienced. Yudhisthir finally becomes the king of Hastinapur! After the defeat of the Kauravas, the Good won. The able king with righteousness and justice ruled Hastinapura for over 36 years. He was one of the best kings in the history of the Kuru dynasty.

Krishna’s, Yadav clans receive wars from many kingdoms and receive defeat in Dwarka. The city of Dwarka in Gujrat was also submerged after their clan was slowly moving to death. Krishna took his children and family to Prabhat for safety, but there they got humiliations.

Dwaraka was submerged in the ocean and when that took place, Krishna lost his Father Vasudev, mother and others who were residing in Dwarka.

Arjuna went to Dwaraka and saved many of the people, men, women, and old in Dwaraka who were drowning and took them to Hastinapura.

Marsala Parva describes the demise of Krishna in the 36th year after the Kurukshetra war had ended, the submersion of Dwaraka undersea, the death of Balarama by drowning in the sea, Vasudeva’s death, and a civil war fought among the Yadava clan that killed many of them.

Overcome with grief, one day Lord Krishna was resting under a tree. A hunter saw the feet of the Lord with the lotus sign below and mistook it to be an animal. The hunter shot an arrow which hit the Lord in the feet. The hunter felt very bad and apologized to Krishna for shooting an arrow towards him.

But Krishna forgave him, He told him his time to leave his body and go back had come, after losing all Yadav’s he was in pain. He left his body as Lord Vishnu and went to heaven. This is how Lord Krishna’s End had come!

5) Parikshit Becomes next king after Yudhishthir

After 36 years of Yudhishthir’s rule in Hastinapura, Yudhishthir took a decision to sacrifice his throne after hearing the Death of Lord Krishna. He hands over his kingdom to Parikshat, who is Arjun’s Grandson , or Abhimanyu’s Son.

6) Yudhisthir and Other Pandav’s along with, Draupadi go to Heaven

One of the Rishi’s Suggested that Yudhishthir has ruled and established a righteous Kingdom now, so he and his brothers along with his wife Draupadi should go to heaven and rest. So They walk up south and visit Dwaraka under the ocean and then leave north to the Himalayas, Mount Kailash where First Draupadi dies, while climbing then Nakul, Sahadev, Arjun, and Bheem. Yudhisthir goes till the heaven gates and reaches heaven.

After this, Dwapar Yuga ends, and The Kali Yuga starts, Kali-yuga is the Yuga which we are living in right now.

What happened after the Mahabharata War?

2 thoughts on “What happened after the Mahabharata War?”