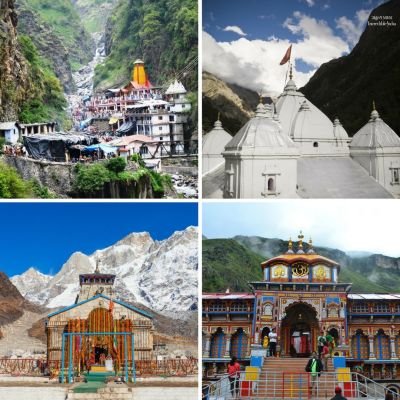 Just like how there are “four directions “, “four Vedas”, similarly there are four places you must visit to complete the Char Dham’s Yatra. People mistake the four Peethams established by Adi Shankaracharya to be the Char Dham which is not true. The Char Dham Yatra is a beautiful journey.

Let’s see as to Why should you do the Char Dham Yatra and its benefits:

The four Dhams are, Badrinath, Dwaraka, Puri, and Rameswaram. It is believed that every Hindu should visit the Char Dham during one’s lifetime. The Char Dham as defined by Adi Shankaracharya consists of four Hindu pilgrimage sites. But they are not the same.

Moksha is Attained once you visit the four places. In India, the Hindus believe that the Char Dham tour opens the gates of salvation by washing away all their sins. It is also believed that this journey must be undertaken at least once in a lifetime. These four shrines have a great significance and place in Hindu mythology.

2) To Get A view of Uttarakhand- Beauty

All the Travel freaks and the ones who want to visit Pilgrimages, you will never get a Perfect combo for both. In fact, the Char Dham is spread across Uttarakhand, Now the best part! you can have entire sightseeing of UK and also have an awesome eye gazing views of the Mountains of Kedarnath, Alakananda of Badrinath, Scenic Gangotri and the Yamunotri. You can cover the entire Uttarakhand as a Pilgrimage reason 🙂 the natural environment, herbs, and greenery make everyone disease-free; and meditating along this place leads to a longer life.

3.How to Sequence Your Char Dham Yatra?

The doorway to the Yatra is Yamunotri. The next destination is the renowned Gangotri, Thereafter the pilgrim has to visit Shri Kedarnath Dham and finally Shri Badrinath Dham. After completing the Char Dham pilgrimage tour, the pilgrim achieves an absolute serenity of the mind.

According to Hinduism, Mythology and its set of beliefs have never changed. Pilgrims who have done their Char Dham find themselves having wishes and they also get them fulfilled. This is one of the reasons why people travel here and also to Thank God to have whatever they have in their life.

The pilgrim sites are located at high altitudes and it is not an easy task to reach there. Although helicopter and palki services are available, it is advisable to prepare your body for extreme climatic conditions.

Now you know why you need to visit and perform the Char Dham Yatra, you will believe these benefits only once you experience and trust me it is going to be Amazing!