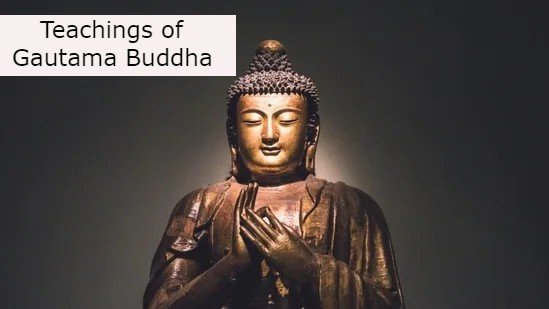 Gautama Buddha was an Indian Sage, Philosopher, and Religious Leader. He was born around 560 B.C. in the Southern portion of present-day Nepal. He was a Kshatriya, a member of one of the two upper classes of Indian society.

While Buddha’s father was a king, legend says Buddha was a member of the Shakya clan who ruled the northern portion of India.

Buddha was born as Siddhartha Gautama to a queen named Maya, and his father was King Suddhodana. His birth was a time of grand celebration, and the Astrologers predicted that Siddhartha would become a great king.

Buddha married and had one son, Rahula. As a prince, he was sheltered from the realities of life and its suffering. Buddha’s father tried to shield him from seeing the true nature of life, but Buddha eventually learned of a sick man, an old man, and a corpse.

Having confronted the essence of life and the inevitability of suffering, Buddha decided to leave his home to seek answers. He left behind his wife and son and was free to lead the life of a wandering ascetic, seeking the truth. He left his home to live as a saint.

After several years of practicing extreme austerities, he realized that such practices are useless and unproductive, and he began to eat more regularly.

He continued his journey, and one day, during a rest beneath a fig tree (later named the Bodhi Tree), he had an experience of awakening, known as Nirvana.

Upon his awakening, Buddha recorded his experience in what is known as the Four Noble Truths. These are the core teachings of Lord Buddha.

Dukkha: Life is full of pain and suffering.

Samudaya: There are multiple causes for the suffering.

Nirodha: There is a way to escape.

Magga: There is a way to end dukkha ultimately.

The Four Noble Truths are notable for their clear and direct approach.

Lord Buddha’s understanding was based on what he experienced. He was not a religious preacher; he was a doctor who healed society’s pain. Buddha healed the hurt of society by pointing out the problem. He did not offer religious, philosophical, or scientific solutions because he was not interested in any of these.
According to Lord Buddha, the source of all suffering is the human craving, desire, or clinging.

There are three poisons – greed, hatred, and delusion. These three causes of suffering are derived from ignorance. There is suffering in life, and it is caused by craving. If we can get rid of desire, we can end suffering. All the teachings of Lord Buddha are focused on these three statements.

Lord Buddha’s research led him to conclude that if we want to get rid of suffering, we must stop craving. This is the basis of his teaching. No person deserves praise or blame for their birth.

Buddha did not deny the existence of God, but he considered it unimportant. He held a non-theistic doctrine. He taught that God is far away and not directly related to this world except by His laws which are not visible. The universe is controlled by natural laws and not by God’s will. Humans are influenced by their own will.

How can Buddhism be a world religion since there are differences and divisions in Buddhist philosophies?

Buddhism is a vast umbrella. It is an ideal form, not a religion. The philosophies within Buddhism are like the many branches of a tree. They are different, but they are still connected to the tree. But the branches of the tree don’t always get along.
This is true, but they still all relate to the ideal or the form. As one of your good thinkers has said, “The tree is an idea.” That is why people like to think of Buddhism as a big tree with many branches.

Yes. It teaches that everyone can be saved. There are many ways to be saved. To be held does not require a belief in God. It means being rescued from the beginning less cycle of existence by overcoming ignorance and ill will and cultivating wisdom and compassion. The way to be saved is the eight-fold path.