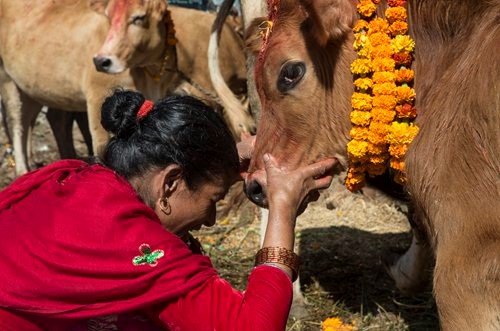 Unlike any other country, that consumes beef as a part of their meal, India estimates the least beef-eating population. Do you know why? Yes, it is because the majority of Indian territory are Hindus which means they Do not consume beef.

Apart from not eating beef Hindus worship Cows – this is a reason why we don’t eat beef. In this article you will know the significance of cow worship in Hinduism, So Don’t miss it till the end …

From the Harappan civilization to the post-Vedic age, approx 5500 years ago our country India has remained a Pastoral society – which includes agriculture and cattle! The cows after the Vedic age were used as a monetization, cow dung cakes, milk, urine of cow – to make ghee, butter, curd. It is a source for all the daily needs this is why cows are worshipped. During the times when there were natural disasters like Famines, Cattle were the life savior that provided vital material.

The Indian cows are scientifically known as Bos indicus cows. Do you know that these cows are very different from the other cows found in other countries? Our cows have a bump like a Camel in the back – This hump has The Suryaketu Nadi, Cows give extraordinary nutrition when it comes to the by-products like milk, etc. This cow is Unique in The whole world! The cow’s urine works as a fertilizer in the agricultural fields

This type of cow has A2 protein, which is better than an ordinary cow that has A1 protein. Now isn’t Cow A reason to worship in Hindutva?

3. Symbolism of A Cow

Cows are said to be A form of mother or goddess, The cow symbolizes selfless nature, wealth, power, A giver. For example, The four legs of Kamadhenu consist of four Vedas and are considered to be as powerful and permanent as the Himalayas. The horns symbolize the Brahma Trinity in the title, Vishnu in the middle, and Shiva under the horn. In his eyes are the sun and moon gods. Agni, the God of Fire, and Vayu, the God of Spirit, rested on his shoulders. In general, it is believed that all the major deities are present within the person of Kadadhenu. This is also how Kamadhenu is often represented in the pictures.

A cow represents having all the deities of God inside her, as a form of Kamadhenu- the wish-fulfilling cow, Hence If one worships cow, He worships all the other gods. This is the significance of why we Hindus worship the cow 🙂