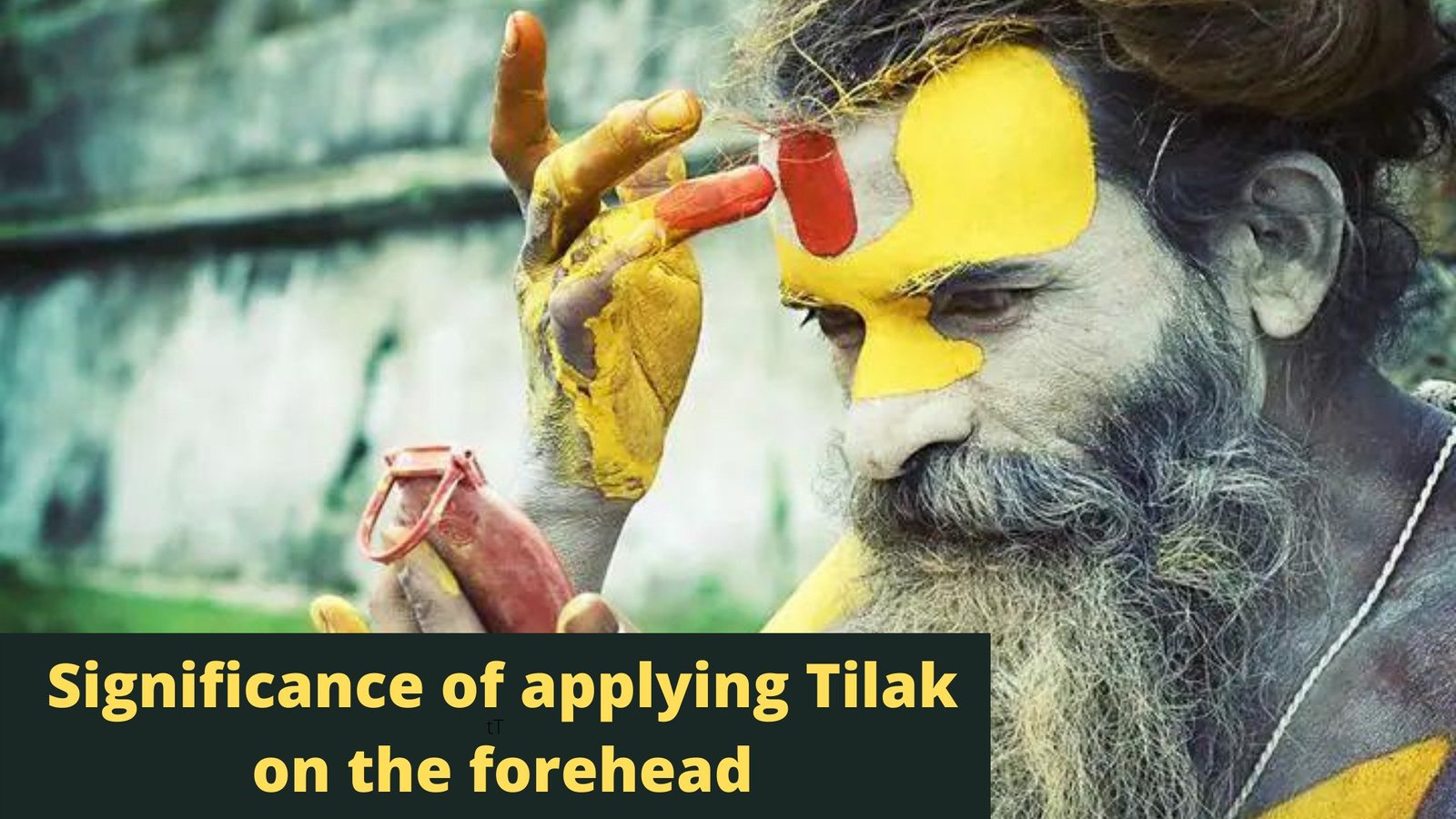 The real identity of Sanatan Hindu spirituality is Tilak. It is believed that by applying tika, the head is always elevated with pride in society. In Hindu families, there is a law to apply “tilak or tika” in any auspicious work. This tilak is applied to many objects and substances. Among these, turmeric, Vermilion, Saffron, Bhasma, sandalwood (Chandan), etc. are prominent.

But do you know what is the hidden feeling or meaning towards applying this tilak?
Know why Hindus apply tika on the forehead and why they keep their hands on the head while applying tilak.

Perhaps the practice of applying tilak on the head is not prevalent anywhere else except in India. This custom is very Ancient. It is believed that Lord Vishnu resides in the middle of a man’s head, and Tika is applied at exactly this place.

It is described in the Puranas that one attains salvation by applying tilak after bathing in the Ganges on the banks of the Sangam. This is the reason that after taking bath, a special tika is applied by the pandas to their devotees. There is a spiritual significance behind applying tika on the forehead.

The scientific importance of applying Tilak:

There are seven subtle energy centers in our body, which are the storehouses of immense power. These are called Chakras. Where tilak is applied in the middle of the forehead, there is an Agya Chakra (Ajna Chakra). This chakra is the most important place in our body, where the main three Nadis of the body, Ida, Pingala, and Sushumna come together, Hence it is also called Triveni or Sangam.

This is the Guru’s place. This is where the whole body operates. It is also the main place of our consciousness. This is also called the home of the mind. That is why this place is most revered in the body. During meditation in yoga, the mind is concentrated in this place.

The place where the tika or tilak is applied is in the middle of the forehead, this part is the Agya chakra. According to physiology, due to the location of the Pineal Gland, when the pineal gland is stimulated, a kind of light is felt inside the brain. This has been proved by experiments, Our sages knew very well that the stimulation of the pineal gland would stimulate the Agya chakra (Ajna Chakra).
For this reason, due to the practice of applying tilak in religious rituals, worship, and auspicious deeds, the gross and subtle components of our body can be awakened by its repeated stimulation. In this easy way, the interest of the general public towards righteousness, spirituality, and knowing the third eye, an effort has been made in the direction of its elimination, due to which the Agya Chakra gets regular stimulation.

Women apply tilak of red kumkum. This is also not without purpose. The red color symbolizes energy and vigor. Tilak enhances the beauty of women. Applying tika is also associated with the worship of the Goddess. Tilak is applied on the forehead after worshiping the Goddess. Tika is considered a symbol of the blessings of the Goddess.

Usually, tilak is applied by the ring finger and only sandalwood tilak is applied to it. By applying rice with tika, the motive of attracting Lakshmi and providing coolness and sattvic is hidden. Therefore, every person must apply tika.

According to the beliefs, a head without a tilak is not considered auspicious. A Tika of sandalwood, Roli, kumkum, vermilion, or Bhasma is applied on the forehead. Tika serves as an identification mark in Hindu culture. There is not only a religious belief for applying tilak, but there are many scientific reasons for it as well.

In Hindu Sanatan Religion, all the Saints, and Sampradayas have their own different tika.
According to Tantra Shastra, there is great importance in applying Tika made of Panch Gandha or Ast Gandha. In Tantra Shastra, it has been said to do tika on thirteen parts of the body, but the whole body is operated by the brain. That is why the tradition of doing tika on it is more prevalent. Different fingers of the helping hand also have their own importance in applying tika.