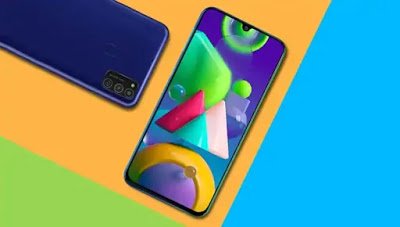 Samsung has launched its latest smartphone in India, Galaxy M21. The device has been launched under the budget segment of the market.
Samsung has in the past enjoyed great success with the Galaxy M series of smartphones, and now the Galaxy M31 will look to build on the momentum generated in the past. The latest edition to the series, the Galaxy M21 brings quite a few features that will remind you of the M31. However, it does so while sporting a much more affordable price tag.
Also Read: Specifications and price of Realme 6i

The biggest highlight of the smartphone is said to be its 6.4-inch Full Hd+ Infinity-U display. Under the hood, the device houses an Exynos 9611 octa-core processor with 4GB RAM and 64GB of storage, while the second variant of the device comes with 6GB of RAM and 128GB of storage.
The rear camera set-up on the phone brings three lenses including a 48-megapixel primary sensor. Sat next to it are two more lenses, one of which is an 8-megapixel lens while the other is a 5-megapixel one. At the front, there is a single lens for the selfie, a 20-megapixel sensor.
Galaxy M21’s is powered by a 6000mAh battery that is claimed to “easily last the entire day and night.” It also comes with an in-box Type C 15W fast charger that ensures 3X speed as compared to the normal charging.
The smartphone also comes with some nifty features, such as the customization of chat by setting up two accounts for the same messenger for different purposes. Users can install and easily manage the second messenger account simultaneously from the home screen and settings menu.
The Galaxy M21 also comes with the AR Emoji feature which helps the user to create and edit emoji stickers. Consumers can even choose to take a selfie or video with their own Emoji. The AR Stickers can recognize up to three people at once, it can detect three common hitches like closed eyes, blurring, or when there is excessive backlighting. It also offers solutions, notifying the user to adjust and reshoot. Further, it can recognize and optimizes 30 kinds of scenes with AI intelligent solutions.
Post Views: 256