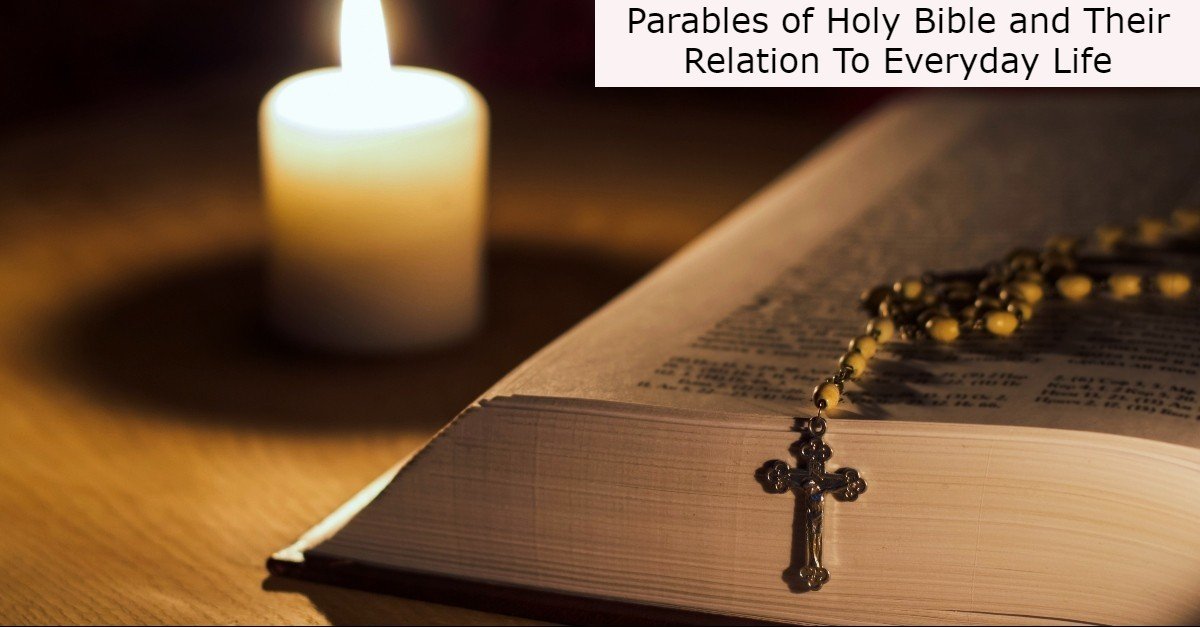 Parables of Holy Bible and Their Relation To Everyday Life

When in the communication of two people and one do not understand, they are then explained with an example of a story, where the other person can understand in a better way.
In the Holy Bible, Jesus shares messages to His followers in the form of parables for them to understand the inner meaning of His message. These parables are an important part of the Bible and are there in every chapter of the bible. His followers will understand and get the real meaning or the moral of the lesson that Jesus has told them. Every parable of Jesus in the Bible is a story that has great relationships in a person’s life. Each has a moral in it where people can understand and follow God’s words in moving to the right path.
Let us look at the few parables that are being told by Jesus to his disciples and those having relation to our daily life.

The parable of the Lost Sheep

This story is depicted in the New Testament of Matthew chapter 18 verses 10 to 14. The story goes like this:
There was a man who had 100 sheep and looks after them like his children and will never leave them. So one day he has taken all of the 100 sheep to the fields for wandering. Out of those 100 sheep, one went away in the wrong direction, and thinking that all his sheep are there with him he continued his journey with them. After a few distances, he wanted to count head his sheep and found that there were only 99 and was sad.
While this parable is being narrated, Jesus asked his disciples, what would he do to find out the missing one? Will he be happy for one who has lost and has 99 sheep with him or will he leave the flocks of sheep there and come back with the lost one? In this way, Jesus continued saying that he would keep the flocks of sheep there and look for the sheep, and when he found the lost one, his happiness was so much in getting the lost one than leaving off that 99 sheep out there.
In this parable, Jesus meant to say, even in our daily life, when any of his people sins he will wait for them to return to his path, and once that happens, he will very much rejoice than few others who have found their way to evil and hell.

The parable of Wedding Feast

This parable is said by Jesus in the bible of Matthew chapter 22 and wordings 1 to 14. The story goes like this:

This parable is about a King hosting a grand wedding feast of his son. The king asked his servants to invite the guests on the list, but some of the guests did not turn up to the feast. When the king understood that, he sent his servants again with a message saying that he has already prepared the dinner where he has killed his ox, bulky cows, and everything is being cooked and kept ready to come to the wedding feast.

On seeing the message, some of the guests reacted differently by not bothering about the servant’s messages and went back to their business, while others killed the servants or did not react to them. By hearing this, the king got angry and burnt the houses and cities of the ones who killed his servants and those who did not turn up for the feast. The king then told the servants to invite all the people that they see on the streets and the way they go. He wanted his hall to be filled with guests.

So finally there were guests who were well dressed and those who were not dressed well or poorly. There the king did not like a few people who were dressed poorly and told his servants to bind them off in the darkness where they will cry and gnash their teeth. The people who were dressed poorly were the ones who were not ready for the feast to fulfill Lord’s commitments.
Here the King has invited those he has chosen and put those who are not expected.

So in life, we have to dress properly when invited for a feast and if not, we have no value in the eyes of many. Only well-dressed people have value on you and those who are true to God as well.

The parable of Wise and Foolish builders

There were two people who wanted to build a house. One night when they slept, they both saw a dream of Jesus, telling them the way to build the house. In both their dreams, Jesus appeared and told them to build their house over hard rock and their house made of bricks, so that it will stay strong and last long.
The next morning when both got up, one person decided to follow the words and instructions by Jesus and built his house over the rock with bricks so that it would stay strong. He was wise and listened to whatever God told him. Well, On the other hand, the foolish man decided to ignore the words of Jesus and decided to build his house with a sand foundation.
When one day a heavy storm arose and the winds blew strong, it beat around the rocky brick house, and it did not fall off. On the other hand, the house that was made of sand had fully demolished and perished with the water.
Well this parable, clearly indicates that those who listen to the words of God will enter God’s kingdom. And those who object to these words will be put to hell and will be made to suffer. Destruction and damages do happen when one ignores the words of Jesus and who ignores to follow his path.

The above mentioned are a few parables that have a great relation to our daily lives. There are more parables in the bible. Jesus has spoken to his people in many parables so that they get to understand what he means. He wants to tell them to protect them from any evildoers and dangers. He is our and everyone’s way of life, guarding us to the right path.