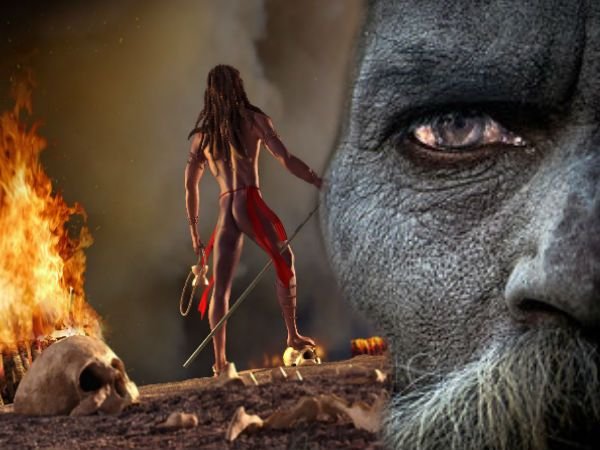 The term Aghor denotes the number of things from one of the 5 faces of Panchabrahm Shivji to the name of the sampradaya. The term also means one who is non-terrible. However, the term when used today brings first the image of a Sanyasi in Shamsaan into the mind.

There are five distinct Sampradayas going by the name Aghor each having certain similarities and differences from the other. The post aims to give everyone an idea about the Panch Aghor Sampradaya or the Five Sampradayas of Aghor.

Aghoracharya Shri Vednidhiji writes in Bhavishyakalpam (a text of the Aghor Sampradaya) which deals with guidelines for people who shall become Aghori Sadhakas in the future that:

This means In Kaliyuga, Aghoresha (Shiva) shall manifest in five forms and establish the
Panch Aghor Sampradayas which shall cleanse the world of all sins.

He further states that initially there is only one Aghor Sampradaya which was started by himself. In the future, this shall be divided into two Upasampradaya while three more Sampradaya by the name of Aghor shall emerge. All these sampradayas shall be established by Rudravashesas and though Gyanmargi Sampradaya shall be capable of bestowing moksha to all through Gyanmarg itself for which the Kaula shastras have been created.

After Shri Kaalbhairav cut off the 5th head of Bramhaji he got Gyan of Aghor from Shivji and Vishnuji then after being rid of Bramhatya at Kapalamochana Ghat. He created the first Aghoracharya Shri Vednidhiji from his Amsha who later initiated 12 Sishyas who later expanded the sampradaya.
The two upasampradays under this original Aghor sampradaya are 1st and 2nd of the Panchaghor
sampradayas.

After this comes the Aghor under the Pashupata Sampradaya. The origin of Kapalikas is revealed in the Varaha Puran Adhyay 97 which narrates the same incidents that led to Shri Kaalbhairav cutting off the 5th head of Bramhaji. However, after this was done he was given Gyan of Nagnakapalika Fast (Vrat) by Bramhaji himself, and following it he was rid of Bramhatya after which he created the Kapalika sampradaya. It’s stated that the Kapalikas are given Gyan of the Pashupata shastra thus they are considered a branch under the Pashupatas.

There are two Pashupatas one is Shrouta (Vedic), and another is Ashrouta (the one hosting Tantrikas, Kalamukhas, and Kapalikas). Aghor marg is not only the name of an individual sampradaya but a distinct sadhana marg as well as per the Yog Vasisth.
Based upon this there is a Upasampraday under the Kapalikas which is called Aghor and on account of Kapalikas being under Pashupatas sometimes people confuse the original Aghor sampradaya with the Pashupata Aghor.

Next is the Aghor Nath which is one of the 12 Upasampraday coming under the Nath sampradaya founded by Guru Gorakhnath. Nath Siddha Matsyendranath or the ‘Fish Lord’ is the first Guru of the Naths. He was originally a fish who overheard a discourse between Shivji (incarnated as Adinath) and Devi (incarnated as Udaynath) after which he was given Diksha by Shivji himself. Later Shivji gave him the boon to be as incarnate as Gorakhnath and become Sishya of this Matsyendranath.

However, Mata Parvati when asked for the same boon Shivji said that the boon of him becoming Sishya can’t be repeated again however the Sishya of Mata Parvati (who became Udaynath and later became Jalandharnath in Kaliyug) shall reincarnate in Kaliyug and establish the sect who’s followers shall be Shivas on earth thereby creating the Upasampraday under the Nath sampradaya following and Spreading Tantra marg. This is the Aghor Nath sampradaya which is 4th amongst the Panchaghor sampradayas and was founded by Kanhapanathji who is none other than the incarnation of Ganeshji.

Finally, we come to the Namdhari Aghor sampradaya founded by Baba Keenaram. While the Aghoracharyas after Shri Vednidhiji didn’t take up any name, those in the Parampara of Keenaram Baba did which earned them the title Namdhari or the ones with names.

The Markandeya Puran mentions Shri Guru Dattatreya in Adhyay 17-19 and states that he was an avatar of Vishnuji. It also states that though he will always be in samadhi and have complete control over his senses. He used to use objects of sense enjoyment such as alcohol and other substances to test the faith of his bhaktas. It’s believed that his Sishyas also took his habits along with his philosophy and walked on the path shown by him. However, the original path established by him was on the verge of extinction due to the decline in Dharma seeing which Shivji incarnated as Baba Keenaram and Shri Dattatreya gave him darshan and thereafter knowledge of his original acharya and darshan. Baba Keenaram after receiving this knowledge went on to establish the Namdhari Aghor sampradaya or the Aghor sampradaya in which the acharyas bear names.

Both the Upasampraday under the Aghor sampradaya founded by Aghoracharya Shri Vednidhiji follow Kevaladvait, that under the Pashupata Kapalikas follow Dvait, that under the Nath sampradaya follow a modified version of Kevaladvait as evident from the Siddha Siddhanta Paddhati Adhyay 1 Slok 5 (the Nirgun Nirakar is called Parashiva as per the Siddha Siddhanta Paddhati Adhyay 4 Slok 1) and Goraksh Samhita and the fact that Aghor Nath darshan states that Shivji is Nirguna Nirakar on account of him originally being in form of sound, however, sound itself is an attribute and thus the remark can be made that Nath follow a modified version of Kevaladvait. That founded by Keenaram Baba follows Yog darshan however has taken the concepts of Kevaladvait such as jivanmukta and Kaivalya being the highest moksha.

All the Panch Aghor sampradayas were started by Shivji himself and their sthapakacharyas as well being Rudravaseshas. The only exception is in the case of Aghor Nath whose sthapakacharya is an avatar of Ganeshji. However, on account of the boon granted by Shivji, he is considered equivalent to Rudravasesha. Aghoracharya Shri Vednidhiji was Amsha of Shri Kaalbhairav, founder of Aghormarg under the Pashupata Kapalikas is Rudravasesha Shri Lakulishacharya and the founder of the Namdhari Aghor sampradaya Keenaram Baba was Rudravasesha.

These five sthapakacharyas are called the Panchaghoracharyas and are regarded as walking Shivas who shall cleanse the earth of Adharma from the beginning to the end of Sristhi.

The Panchaghoracharyas in chronological order are