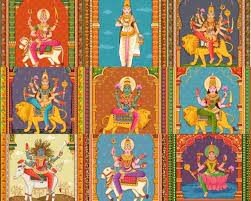 During Navratri, The Mother Goddess Durga is said to appear in 9 forms. Each one of these 9 manifestations is worshipped for a day. Do you know who are the forms of Durga and why we worship them? Read the article till the end and keep the Navratri Spirits high 🙂

Today is the first day of Navratri, which is for our Goddess Shailaputri who arrives the first.

Among the manifestations of Goddess Durga, Shailputri is the first. She rides a bull called Nandi while holding a Trishul in one hand and a lotus in the other. She is known as Shailputri because she was born as the daughter of Himalaya, and Shail means mountain in Sanskrit.

What Do we offer during this day?

Shaila means when the peaks of mud when touch the sky – She is born out of the peak. During any peak of experience, there is the divine mother.

Bhrama- means infinity, In one hand, she holds a rudraksha mala, and in the other, a sacred Kamandalu. It symbolizes Goddess Parvati’s deep meditative state when she was attempting to please Lord Shiva.

Goddess Brahmacharini is offered sugar for the longevity of the family members.

Chandra- moon, Chandra ghanta means calming the mind. The third day of Navratri is dedicated to Goddess Chandraghanta. She is a fierce goddess with ten arms and a crescent moon on her forehead, which gives her the name Chandraghanta. She rides a tiger to destroy all evil!

The ferocious goddess is pleased with Kheer. She is known to drive away all pains.

Chaturthi or the fourth day of Navratri is of Devi Kushmanda. The name Kushmanda comes from three words – ‘Ku’ (little), ‘Ushma’ (warmth or energy), and ‘Amnda’ (egg), which means creator of the universe. Devotees offer Malpua Sweet to Maa Kushmanda to improve their intellect and decision-making ability.

Bananas are the favorite fruit of Goddess Skandmata you can offer!

Navratri’s sixth day is dedicated to Goddess Katyayani, a form of Shakti. Katyayani, also known as the warrior goddess, is considered one of Parvati’s most violent forms. She carries a sword and has four arms. Sage Katyayan’s daughter rides a lion.

It is the day of Goddess Kaalratri that is known as Saptami, or the seventh day of Navratri. According to legends, she sacrificed her skin color to kill demons by embracing a dark complexion. The four-armed deity rides a donkey, carries a sword, a trident, and a noose. On her forehead, she is believed to have a third eye containing the entire universe.

Jaggery is offered as a prasad to Devi Kaalratri for relief from pains, obstacles, and happiness.

Durga Ashtami or the eight-day of Navratri is dedicated to Goddess Mahagauri. Consequently,

Mahagauri fulfills all the wishes of her devotees. Maha means great or immense, and Gauri means white. She has a fair complexion, as her name implies. The goddess Mahagauri is four-armed and rides a bull. One arm remains in Abhaya Mudra, while the other holds the Trishul (trident); and one left arm holds the Damru (a small hand drum), while the other stays in Varada Mudra. Apparently, Parvati’s skin was affected by the tough penance she underwent in order to become the wife of Lord Shiva. Her complexion got black from all of nature’s calamities. Shiva cleansed her body in the river Ganga when he accepted her. As a result, her real complexion emerged, which was extremely white.

Navratri will end with the celebration of Goddess Siddhidhatri on the ninth day. She is portrayed as a four-armed deity sitting on a lotus with a mace, discus, book and lotus in her hands. Her form represents perfection. Consequently