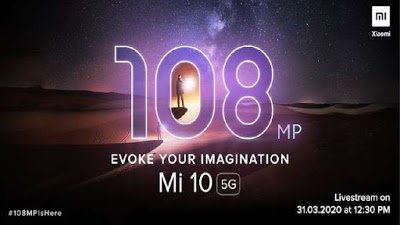 The Mi 10 5G is Xiaomi’s 10th-anniversary flagship phone and the first Mi flagship to launch in India in a while. The phone packs a 108MP primary rear camera, support for 8K video recording, and also has support for wireless charging.
Advertisement

Other features include a 6.67-inch FHD+ AMOLED display with a punch hole. A Snapdragon 865 processor, up to 12GB of RAM and 256GB of storage, a 20MP selfie camera, stereo speakers, and a 4780mAh battery capacity with support for 30W wired and 30W wireless fast charging.
The page says pre-order will begin on March 31 and run till April 7. We expect the first sale will be on April 8. AXIS Bank users can get up to INR 2500 off the retail price of the phone.
We have no idea what the price will be but it sure is going to be expensive based on a statement from the CEO of Xiaomi India. The top executive said yesterday that the increase in GST, weakened INR against USD, and the fact that the phone is a direct import will have them adopt a different pricing model.
Post Views: 265