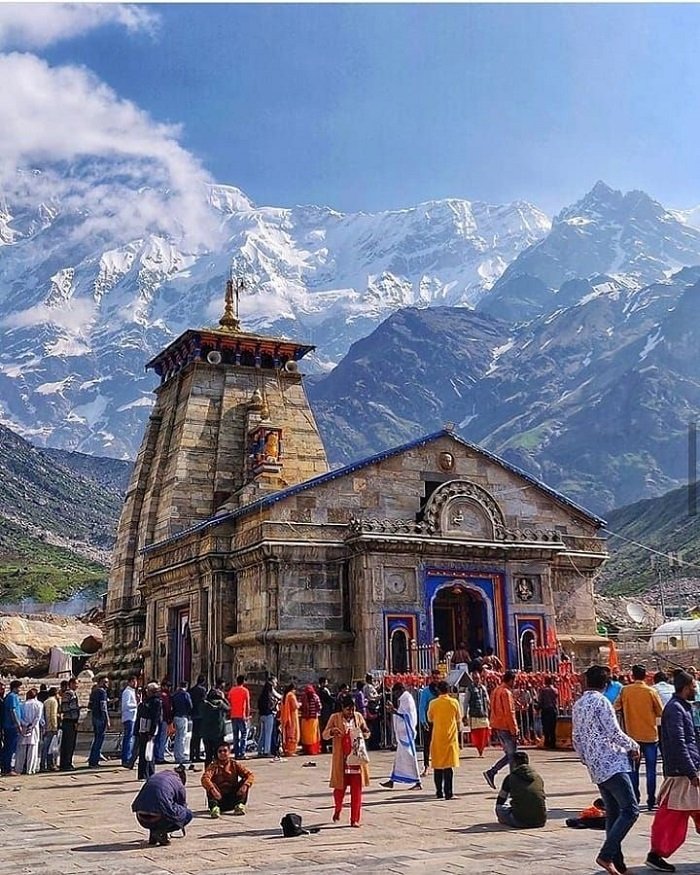 What do you imagine if I tell the word ” Kedarnath” , Do you think of Those Himalayan mountains you see in the background of The temple, or the Chaar Dham Yaatra? Kedarnath is a duo of both. If you are a Bollywood fan, Looking at the image above your mind would automatically generate

” Namo Namo ji Shankara, Bholenath Shankara” from the Kedarnath Movie. Now without any further due, Let’s look at some of the most interesting facts you’ve never heard about Kedarnath.

In the Hills of Kedarnath, Vishnu or Narayan prayed to the shivling which arrived from the naraka or underground. Then, one day Lord Shiva appeared before Vishnu and was very happy for all what he did. Lord Shiva gives a boon to Vishnu , So Vishnu asks Shiva that he should always be there in this place and live in kedarnath.

Shiva agrees to the boon and Today what we see is A Shiv- Ling , Is a Part of Shiva. The Shiv-ling found in kedarnath is divine and they say Shiva still resides in this place. Hence the person who visits Kailash will be free from all their sins. And Achieves their desires.

2) Who Built This Temple

According to Hindu legends, the temple was initially built by Pandavas, and is one of the twelve Jyotirlingas, the holiest Hindu shrines of Shiva. Pandavas were supposed to have pleased Shiva by doing penance in Kedarnath.

The Pandav’s went searching for Lord Shiva, to pay for the sins they performed throughout their lives. In Kedarnath, Shiva disguised himself in the form of A rishi or sage and confronted the Pandavas. The sage told them to built A temple where the Shivling is situated. They agreed to build the temple and Shiva was very happy and blessed the Pandavas.

Lord Shiva who was hiding from them was in the form of Nandi, the bull.

3) Parvati Prays For Shiva – To Create The Ardha- Nareshwari God.

According to the Hindu texts, Parvati prays for Shiva or the Kedareshwar God many times and did her pooja in this same place. Kedarshwar becomes very happy for the love of Parvati and takes on The Ardha – Nareshwari Avatar in order to please Parvati. This took place in this holy land of Kedarnath!

4) Why was this Place named “Kedarnath” ?

People in Kedarnath prayed to Lord Shiva, for all the evil things which was going around. So, Shiva Takes a Form of a bull and kills all the Demon’s in this place. That is why this place is called Kedarnath, since “Kodarun” was extracted meaning a bull and People and God’s named this place after the one who slayed people or Kedarnath.

It is said that Bhairavnath Temple comes way before you actually reach Kedarnath Temple. Bhairavnath temple is the Guardian of this temple, that is why till date we can see nothing has happened to the temple premises and the shiv-ling.

6) The Rock Which Protected Kedarnath from the Floods

We all definitely know the worst of floods took place in Kedarnath. The incident took place on March 13 2013. When the Rainfall increased and ice caps melted due to the rise of the Chorabari Lake where Bhagirathi River overflowed. The water came down the hills after a cloudburst took place. It wiped the entire Kedarnath but one of the Debris rock fell right behind the Temple, Which made the direction of water change, and that is how The temple was rescued and some people present inside too.

Indeed this is a miracle which has taken Place. The rock which protected the temple is now being Worshipped. Due to Bhairavnath’s Proctection indeed!

Now you know why’d you have to visit this holy place at least once. Har Har Mahadev!