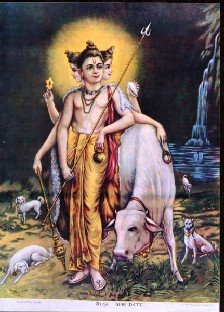 In this article, you will know the untold story of how Lord Dattatreya came into existence and an untold story, As Shown In Bhagwat Puran Skand-1.

Introduction to The Lord:

Dattatreya is the 6th avatar born to Atri Rishi and Anasuya, having three faces He is known to appear in front of their true devotees earliest and fulfills their needs – Another reason why he is called ” Smritigami”

Advertisement
-The first teacher of knowledge and the trio of the supremest! This is Lord Dattatreya.

Atri is the manas Putra of Lord Bramha and is one of the Saptha Rishis. He stands on his feet and penances to please the supreme trinity God- Bramha, Vishnu, and Maheshwara, for 100 years. After seeing Atri’s devotion, the trinity appears and asks him his wish. Anasuya, his wife- seeing the trinity demands all the three gods to be her Child together. Listening to Atri’s wife, Bramha, Vishnu, and Maheshwara – Further, are Born as one.

The Baby Dattatreya is here:

Similarly, the trinity’s Shiva, Bramha, and Vishnu forms appear as a small children to Devi Anasuya, where she views him as Lord Dattatreya. She takes care of them as her own child, plays, feeds, and gives A motherly love. Besides, Anasuya is also one of the pativratas among the seven others. This was also a form of test for Anasuya.

The wives of the Trinity feel jealous

Right, when The three gods chose to be enjoying in Mother Anasuya’s shade, The wife of Bramha, Vishnu, and Shiva, respectively Saraswati, Lakshmi, and Parvati felt angry and jealous of their husband’s deeds, As Anasuya fed her breastmilk to them, the goddesses didn’t like to entertain it anymore and ask the Trinity to come back to their original form.

Dattatreya returns to the Original Form:

The wives of the great trinity came from the heavens and requested Devi Anasuya to release the Gods into their original form as they couldn’t see their husbands like this. Undoubtedly, Seeing the goddess plead, Anasuya listens to the Goddesses and the Trinity emerges As Shiva, Vishnu, and Bramha.