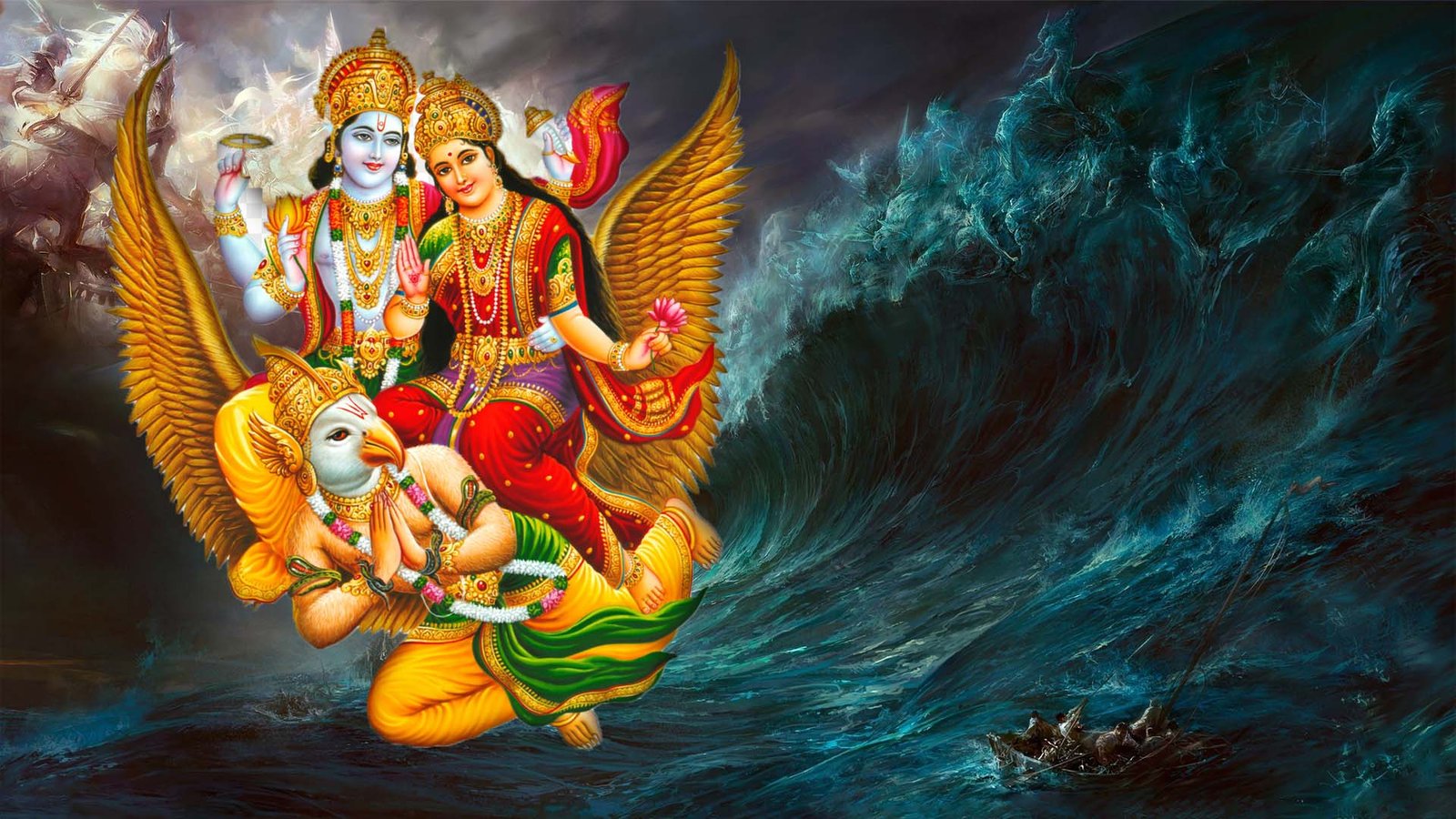 We all know that Lord Vishnu rides on Garuda. Garuda is a huge, strong, and massive humanoid bird. He is unbeatable in all the 3 Lokas i.e. Swarga Lok, Prithvi, and Patal Lok. Undoubtedly, Garud is popular as Vishnu’s Vahan/Vehicle. Do you know how Garuda became the Vahan of Lord Vishnu?

In this article, we shall know the story of Garuda’s birth, his strength, and his relation with Vishnu.

Two of his wives Kadru and Vinata were sisters. In spite of being sisters, they always envied and disliked each other. One day Kadru expressed her desire of giving birth to 1000 strong Nagaputras (serpents) to Rishi Kashyap. Soon her sister Vinata expressed her desire to have 2 sons, who would be stronger and braver than Kadru’s children. Rishi Kashyap blessed both of them to have the desired offspring. In a few day’s, time both the ladies got pregnant. Then, Kadru gave birth to 1000 eggs and Vinata gave 2 eggs. Both the ladies placed their respective eggs in warm containers for hatching. In a few day’s time, the 1000 eggs of Kadru hatched quickly. 1000 Nagas were born out of them. Sheshnag, Vasuki, and Takshaka were the eldest out of them.

Vinata was worried. Her eggs hadn’t hatched yet. Out of anxiety, Vinata broke one of the eggs to help the child come out. Unfortunately, the child born wasn’t fully developed. It was a bird with only an upper body. The lower part was deformed. The disheartened child cursed his mother. He told her, she will be captured and enslaved by Kadru and her 1000 Nag kids. On seeing his mother cry, he gave her a boon. If she allows the other egg to hatch in time, the newborn child will be strong enough to rescue her from the Nags. The bird flew away into the sky. His name was Arun. He became the charioteer of Surya Dev.

Vinata waited for many months. One day her second egg hatched and Garuda was born. He grew up to be a massive, strong bird. According to Aruna’s curse, Kadru had captured Vinata with the help of her 1000 Nag kids.

Garuda pleaded with the Nagas to rescue his mother. They told him that they will set her free provided Garuda brings Amrit (nectar of immortality) from Swarglok. They were aware of Garuda’s power. Garud quickly flew towards Swarglok. He asked Indra (the king of Swarglok) for Amrit. Indra refused to give him the same. Garuda got indulged in a war with Indra and the Devas. Besides, He was strong enough to single-handedly defeated the Devas in the fight. Indra and Garuda end up with an agreement that Garud will be allowed to take the pot of Amrit and give it to the Nagas. Consequently, Indra would cunningly snatch it back from the Nagas before they could even consume it.

All Garuda had to do was to place the pot on a dry grass platform and ask Nagas to consume it after a bath. Hence, Indra would get enough time to steal it before the Nagas return from the bath.

Garuda took the pot of Amrit and flew to the Nagas. Thus, The plan made was implemented successfully. Nagas released Vinata. Indra stole the pot from the Nagas and took it back to Swarglok. Indra blessed Garuda to be stronger than the Nagas and become their predator. In spite of being brothers, the Nagas and Garudas became sworn enemies. Henceforth Nagas became food for Garuda.

Vishnu was watching all these proceedings silently. Nevertheless, He was deeply pleased by Garuda’s sincerity. Garuda could himself consume few drops of Amrit and be immortal. Moreover, He gave it to the Nagas and is even helping Indra to snatch it back. On his way back from Swargalok to the Nagas, Vishnu appeared to Garud and appreciated him. Vishnu offered him to ask for any boon and that shall be fulfilled. Garuda asked Vishnu to make him immortal without having to drink Amrit. He also requested Vishnu to have Garuda’s image on his flag/banner. Vishnu agreed to it. Hence Vishnu’s banner or flag is called Garuda Dhwaja.

Garuda was very happy on receiving the boons from Vishnu. He was so happy that in return he offered Vishnu to ask for whatever wish he wanted from Garuda. As Vishnu was highly impressed by Garuda’s valor and faithfulness, Vishnu decided to make Garuda his Vahan/vehicle. Garuda was happy and he readily agreed to serve Vishnu throughout his immortal life.

Let us know us in the comment box what you learn about this story.

4 thoughts on “Do you know how Garuda became Lord Vishnu’s Vahan ?”