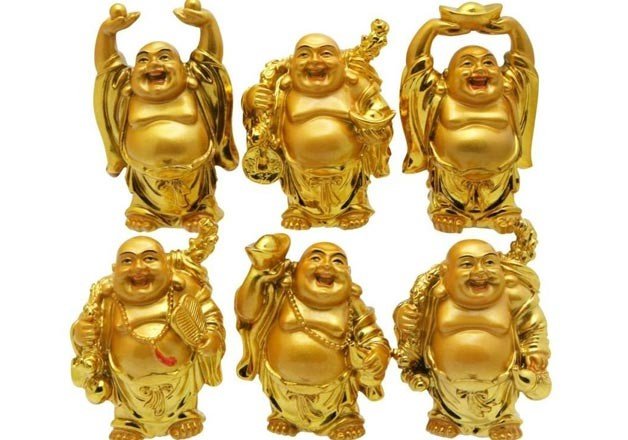 We have all seen Laughing Buddha at a Chinese Restaurant or mostly at our homes, But Do you ever wonder who is this Laughing Buddha and why we keep them? Yes, it is for Good Luck, but there are various types of different structures of Buddha for various benefits. Let’s learn about all these topics until then read this article to the end 🙂

An Introduction to The Laughing Buddha…

Hotei or Pu-Tai is the real name of the Laughing Buddha. According to Chinese tradition, ‘Budai’ was an eccentric Chinese Zen monk who lived during the later Liang dynasty (907-923 AD) of China. He was considered a man of good and loving character. Some Buddhist traditions consider him a Buddha or ‘Bodhisattva’, usually Maitreya (the future Buddha). His large protruding stomach and jolly smile have given him the common designation “Laughing Buddha”.

In Japanese, ‘Budai’ is pronounced as ‘Hotei’. It means ‘cloth sack or ‘glutton’. It is believed that if one rubs the belly of Buddha, it brings good luck and wealth. Just like how Indians have Vaastu Shastra, the Chinese believe in Feng Sui which is based on the five elements of nature.

How Did He become Laughing Buddha?

I’m sure you know about Gautam Buddha, the Mahatma of all the Buddhas. One day A Buddha approached to gain knowledge from Gautam Buddha. So He agreed to teach him – He is the Laughing Buddha, It is said that his appearance comes from a Buddhist Zen monk who lived over 1000 years ago. His protruding stomach and jolly smile earned him this name.

The Laughing Buddha symbolizes joy, wealth, and luck, and the five kids symbolize many children through future generations in the family. In general, its good fortune coming from heavens.Consequently, It also brings good luck and positive energies.

2) Laughing Buddha with a bowl

This Laughing Buddha keeps a bowl on his hands raised above the head, The bowl depicts a monk’s life. It is associated with renunciation of material possessions and attaining enlightenment. By keeping this Buddha, One attains peace and the spirituality. Thus, The empty bowl symbolises that your plate is empty and whatever served in plate would be taken as a way of life.

3) Laughing Buddha with a fan

Undoubtedly,This one symbolizes happiness and joy. It is said that waving of fan by Buddha sculpture depicts banishment of troubles. By giving this to someone, Buddha removes the troubles which come in between a person and leads to happiness as the fan depicts.

4) Laughing Buddha with a sack or bag

The Buddha carrying a sack represents a traveler. The sack means that he collects people’s sadness and woes and puts them in it. Another version says that the sack symbolizes wealth and good fortune. In addition,This means When you have this Buddha you have good fortune and luck of travel!

5) Laughing Buddha with beads or balls

It is believed that the one with beads represents a monk practicing meditation. The beads also represent pearls of wisdom.
The ball is considered a wealth ball and is said to bring wealth and prosperity.

This is indeed a sort of gift to give it to your friends right?

1) The sitting posture of Buddha is considered to be that of love and it symbolizes balance of thoughts and tranquillity.
2) The standing Buddha symbolizes riches and happiness.
3) Buddha sitting on a large gold nugget and ready to give a smaller gold nugget is a symbol of good luck.
4) Buddha with his fan hat on head represents enjoyment and good fortune.
5) Evidently,Buddha holding a gold block with his hands in upright position signifies abundant riches and good luck.
6) Buddha with fan in one hand and bottle gourd in another brings blessings and good health.
7) Buddha carrying a bag of gold on his back symbolizes prosperity.
8) Buddha carrying a bag of blessings on his right shoulder and fan on the left one protects during long journeys.