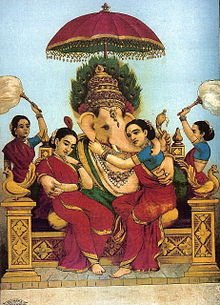 Ganesha is the most celebrated and worshipped deity of Hinduism for centuries. Often called “Ganapati” and “Vinayaka”. We know that he was a great God of knowledge, unlike other gods who fought Physical wars. He chose intellect. As children, we have heard a lot about Ganesha’s stories- one among them was how he had a parikrama around his parents Shiva and Parvati to show that “he took a parikrama around the world”. But have you heard about Ganesha’s wives? How they met and what exactly took place? read more to find out.

1) Ganesha faces difficulties to get married

His short body, with pot-bellied stomach, four arms, and An Elephant Trunk made no women fall in love with Ganesha’s Beauty. Ganesha was one of the wittiest and had a lot of wisdom. He was also very caring, kind, and down-to-earth. But Women didn’t understand him, he was left always rejected by others, and had a lot of anger.

When Ganesha’s marriage isn’t taking place, he doesn’t want any other marriages to take place, may it be God’s, Human, or any other Asura. He is Bubbling with anger and does everything to stop other’s marriage like making the weather bad, extinguishes the fire from The Fireplace. With the help of his Vehicle “Mushak Raj” or rat he does pranks and stops marriages from taking place. Seeing Ganesha’s deeds The Gods go and suggest Bramha give birth to a girl who would marry Ganesha.

Bramha along with his two daughter’s Riddhi and Siddhi went to Ganesha’s place. Bramha asked if Ganesha can teach both of them with knowledge. He agrees to teach them.

One day when Mushak came to tell Ganesh about the people who were getting married and the plans of the rat, Riddhi and Siddhi diverted Ganesha by the talks. The plans were slowly reducing and it made two people marry each other

Bramha tells Lord Shiva and Parvati to get Riddhi and Siddhi married to Ganesha, so by the suggestion of the Gods, Ganesha finally gets two wives who complete him – Riddhi and Siddhi, Many gods come to witness their Big Fat Wedding and after some years,