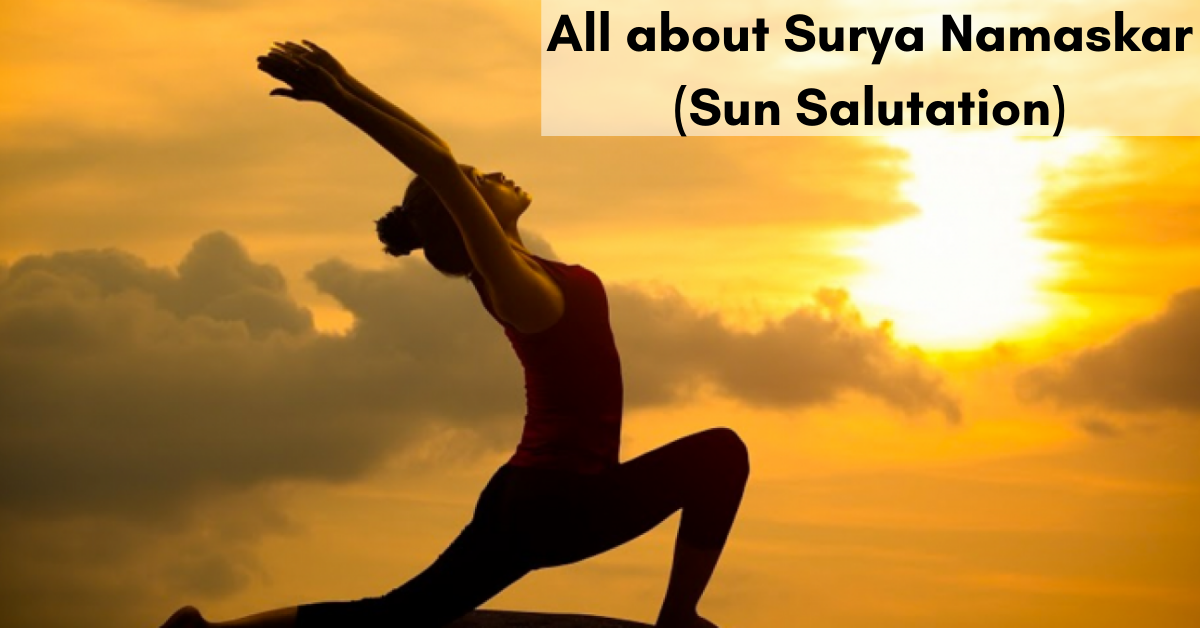 Are we making sure that we are living life healthy and smart and taking care of ourselves from germs and other infections? Are you making sure that you are keeping yourself fit and healthy for a better living? The lifestyles of today are leading us to unhealthy diets and ways of living. Most of us misuse it and take it for granted and later fall ill. So exercising or practicing yoga daily is good for our health and in keeping us healthy and fit both in mind and body all through the day, and also in having a relaxed mind and body.

There is much yoga that people know in keeping them fit. One of the common and important ones in keeping us fit and helping in reducing our weight faster is Surya Namaskar. It has 8 steps to be followed and practiced. This form of yoga means saluting the sun at the beginning of the day. Surya Namaskar is mostly performed by the time the sun rises and welcoming it for the day. In the beginning, it is difficult to practice but on daily basis, it becomes easier and reduces the excess fat in your body, and gives relaxation to your mind.

Surya Namaskar is an important form of yoga that is being practiced for those who need a healthy lifestyle and in getting a relaxed mood. Doing this daily gives you energy and makes your day happy and positive. The main thing that one has to keep in mind by doing this yoga is the posture and the breathing that you do while doing this yoga. You will gain the best results by following the breathing pattern and with the correct posture.

Just doing Surya Namaskar on daily basis will not help in reducing your weight but the proper diet should also be followed in gaining the best and high-quality results. It is common for all exercise you do to reduce the excess fat from your body. When you make small sounds or chants while doing this helps in developing spiritual life, and also a deep sense of gratitude about life and gives you great peace to both your mind and body all through the day. They also help in giving you a proper balance between body, breathing, and a better state of mind.

Facts and benefits of Surya Namaskar

The first thing that is to be noted while doing suryanamaskar is the posture. Other exercises do have postures and breathing techniques but when it comes to yoga, posture is the most important when being performed. It is necessary that one has to be more careful about the posture and extra care has to be taken care of. In yoga only when it is done with correct posture do positive results happen. Stretch is the most common and important part of yoga, and if you over-stretch the required ones, then there is no point in doing yoga. A positive effect won’t happen. The posture in All about Surya Namaskar stretches many of your muscles at the same time in one go.

Secondly, it helps in giving your body a good tone. They have the advantage of two aspects in your body, one by helping in your cardio-vascular functioning and in toning the muscles of your body. The stretches that you perform in various yoga’s, help in stretching your muscles, and later you don’t have to use dumbbells to get away from your skin that is fat and chubby. This form of yoga not only helps in toning your body but also gives a tight effect on your extra skin. They also help in giving you strength both mentally and physically.

Then comes in helping you lose a lot of calories. Burning calories are hard to many and a lazy thing to do as have to struggle a lot and lose a lot of sleep and say no to favorite foods to burn down the extra fat in you. Many exercises are there where it helps in burning calories, but doing multiple times Surya namaskar helps in burning more calories compared to the regular exercise as this single set of 8 steps of yoga helps in moving all parts of your body and stretching all muscles of your body. When you perform a half-hour of Surya Namaskar will help in burning 420 calories. While doing certain asanas, you will be aware of the breathing and various sensations in your body. This single Surya Namaskar for multiple times in a day will help in saving your money in going to the gym.

You will find many benefits of health. Exercise will help in giving you good health both in mind and body. But by doing this single form of yoga exercise gives you benefits in many like improve in blood pressure, helps in getting rid of depression, anxiety, tensions, clears the problems of digestion, helps in getting your good sleep and so on. Here you don’t have to visit the doctor or spend money on treatments.

They are also known to boost the functions of the brain. It has been proved that by doing Surya Namaskar, they help in giving you a great level of memory, high concentration for single or multiple communications, and so on. They are also known to lower the stress hormones and reduce certain chronic inflammation and help in getting rid of other diseases that come your way.

Known as the best hair treatment. Many people do have problems in maintaining their hair like hair fall, dandruff, and so on. There will be no one who loves to have frizzy hair but shiny and smooth and hair that is well maintained. Those people, according to certain findings, who perform suryanamaskar on daily basis, have improved growth of hair and better hair than those who do not do this. It helps in boosting your scalp blood circulation for hair growth and gives you more oxygen and essential nutrients to your scalp.

The steps involved in Suryanamaskar

This is the beginning step Surya Namaskar where you have to stand straight at the end of the mat, the chest being open and shoulders relaxed and breathe in and lift both your arms up from the sides. You have to then bring it down towards your chest placing both your palms together in the form of prayer.

After the completion of the first, you then have to breathe in and put both your arms back and slightly bend yourself back a little and put a stop there for a few seconds of the breath that you take in and out. You just have to make sure that the biceps are close to your ears. Stretch the maximum and come forward.

After breathing out, you have to bend forward from your waist keeping the spine straight and exhale and bring your hands down on the floor. you can touch your hands on the feet or floor only if you can, if not just do till where you can each. Practicing more will help in getting your hands to touch your feet and floor.

Here you have to breathe in and put back your right leg and push it or stretch it back as much as possible. Bring your right knee to the floor and you have to look up slowly, where it stretches all way down and up.

After that you have to breathe in and place your left leg back and later you have to bring your body in the position of a straight line. Also, you can call it a plank position.

Slowly you have to bring your knees down to the floor and have to breathe out. Then slowly push your hips back and slide forward and keep your chest relaxed on the floor. Slowly bring up your posture a little bit like a kind of push up keeping your legs straight.

Push yourself slightly forward and raise your chest like a cobra by bending your elbows and keeping it fixed. Your shoulders should be away from your ears and you have to look up slowly.

You just have to breathe out and have to lift both your hip and tail bone slightly up with your chest being downwards making a position of a V shape.

Breathe in and push your right leg forward where it comes between your two hands. You have to bring your left knee to the ground and press your hip down and lookup.

Here you have to breathe out and bring your left foot forward keeping your hands on the ground. You have to keep your knees bent whenever you feel uncomfortable.

You have to breathe in and roll your spine up making your hands go up and bending it backward a little bit. You have to make sure that your hips are pushed outwards slowly.

Breathe out and make your body straight by bringing your arms down which is the end of Surya Namaskar.

These steps have to be repeated at least 10 to 30 times if possible to lose weight faster and get good mental health and physical health.