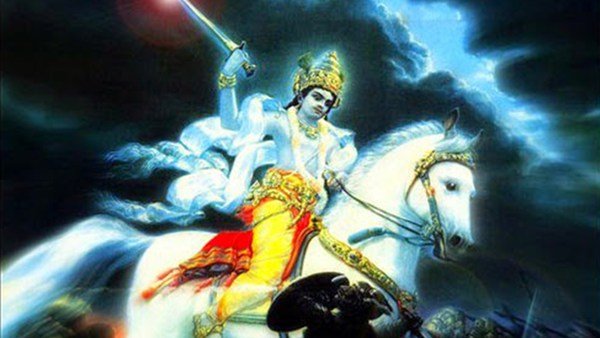 The immortals who are waiting for Vishnu’s Kalki Avatar

As for how Science is telling us about different Eras of Earth, in the same way, our Sanatana Dharma tells us about four Yugas of Earth. They are Satya Yuga, Treta Yuga, Dvapara Yuga, and Kali Yuga. They are in proportion with each other, which is 4:3:2:1 respectively. It means one Satya Yuga is equal to 4 times that of Kali Yuga, others likewise.

Whenever Adharma reaches its peak Vishnu has taken an Avatar to save Dharma. Till now in the previous three yugas, Vishnu has taken 9 Avatars to save this earth from Adharma. And they are, Matsya Avatar, Kurma Avatar, Varaha Avatar, Vamana Avatar, Ugra Narasimha Avatar, Parashurama Avatar, Shri Rama avatar, Sri Krishna Avatar, and Buddha Avatar.
According to Vedas, at the end of Kaliyug, Vishnu will take Kalki Avatar and complete his Dashavatara by destroying Kali Rakshas. And for this Kalki Avatar of Vishnu, seven immortals from Satya Yuga to Dwapara Yuga are waiting. According to Hindu Puranas, these immortals will fight against Adharma along with Kalki.

Who is Kali Rakshas?

Before knowing about those immortals, let us know about Kali Rakshas. Rakshas means a weird structure comes to our mind, that they will have monster-like faces, their body will be as big as mountains like these, but few of them are not visible to us, but still, they exist.

As we all know that day by day Humans are becoming Cruel and violent, demons will control Human minds and crime rates are increasing every day, and if it goes like this at the end of Kaliyug all living creatures will be destroyed, that’s what Kali Rakshas wants. And if a human wants to live peacefully without coming under the control of demons, they have to focus on good things and they should have faith in God. At the end of Kali Yuga, Vishnu will come to Earth in Kalki Avatar and destroy Kali Rakshas and help humans to live peacefully and will save Dharma.

At the end of Kali Yuga, Vishnu will come to Earth in Kalki Avatar.

Who are those immortals?

As we all know that Hanuman is Shiv Avatar, in Treta Yuga Hanuman was the devotee of Vishnu’s Shri Rama Avatar, After defeating Ravan, Shri Rama ruled for about 10,000 years, before leaving his life. Shri Rama tells Hanuman to stay until the end of Kali Yuga to save Dharma, from then to till now Hanuman is still there on Earth. In Dwapara Yuga Hanuman also showed himself, and many proofs are there on this Earth of his existence. According to Vedas at the end of Kali Yuga, Hanuman will meet Kalki to fight against Adharma.

Parashuram is the sixth Avatar of Lord Vishnu, and he is waiting for Vishnu’s  DashaAvatar. He appeard in Treta Yuga and Dwaparayug also. In Sita Swayamvar Shri Rama breaks Shiva Dhanush, the sound was too loud that it awakes him from his Tapasya, he went on to see the reason behind that sound, there he meets Shri Rama, there he will get to know that Shri Rama is the next Avatar of Vishnu.

The third person who is waiting for Kalki Avatar is Ashwathama. He is the son of  Dronacharya in Dwaparayug, and he tries to kill the son of Abhimanyu in the womb of his wife Uttara from his Brahmastra. By knowing this Lord Krishna cursed  Ashwathama to live in pain and to seek death every day until the end of this Universe. Till then he will be suffering from this curse of neither die nor live.  According to Vedas, it is mentioned that his curse will be released by Vishnu’s Kalki Avatar.

He is named Veda Vyasa also he is the creator of 4 Vedas, Rigveda, Yajurveda,  Samaveda, and Atharva Veda. Along with this he has written 18 Puranas and created Bhagavad Gita also. He has mentioned the Kalki Avatar in his Granthas also. He is in deep meditation waiting for Kalki Avatar.

Even though he is the brother of Ravan, he tried to stop Ravan to fight against Shri Rama, as a great devotee of Shri Rama he helps Shri Rama to destroy Ravan. Shri Rama favored Vibhishana to become Chiranjeevi and to get blessed by Kalki Avatar in Kali Yuga.

Bali Chakravarthi is from the family of Bhakta Prahlad, he was too offensive, to overcome this Vishnu has taken Vamana Avatar, and in his Virata roop, Vamana pushed Bali Chakravarthi to Patal Lok. From then he is waiting for Kalki Avatar to get Moksha.

According to Sanskrit Granthas, he is a Chiranjeevi. In Dwaparayug he was the uncle of Ashwathama, and he was the first Guru of Pandavas and Kauravas when they were kids, and he was the Guru for Arjun’s Grandson Parikshith also. He was a  great warrior, he alone faced 60,000 Sainik in the Mahabharata battle, from thereafter he got the name of Maharathi also. For his Honesty Lord Krishna favored him to become Chiranjeevi, from then he is in deep meditation waiting for Vishnu’s Kalki  Avatar.

Please let us know about this article in the comment box.

When will Kalki Avatar be born