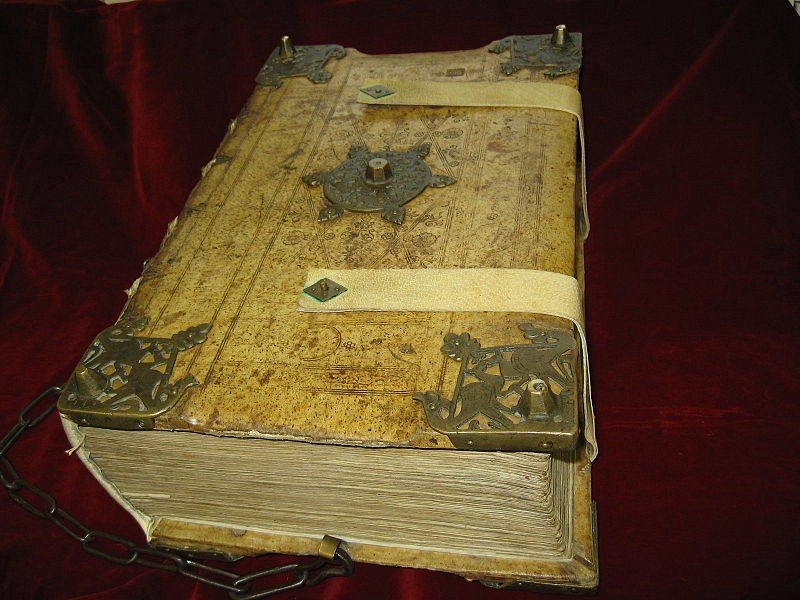 Created in the early 13th century in Bohemia (now the Czech Republic), the manuscript contains the Vulgate Bible written in Latin.

History of the manuscript

The Devil’s Bible or Codex Gigas was created by a monk Herman the Recluse in the Benediction Monastery in the Czech Republic (then Bohemia). It was then traded to the Sedlec Monastery to the Cisterine monk where it remained for 70 years.

The Benedictine Monastery in Břevnov later reclaimed the book around the culmination of the 13th century.

In the 15th century, the monastery was destroyed during the Hussite Revolution. In 1594 the Devil’s Bible or Codex Gigas was taken to Prague to form part of the collection of King Rudolf II.

At the end of the Thirty Years’ war in 1648, the entire collection was taken as a war treasure by the Swedish army. From 1648 to 2007 the manuscript remained in the Swedish Royal Library in Stockholm.

Later in September 2007, the Codex Gigas or Devil’s Bible returned to Prague on loan from Sweden until January 2008 and was exhibited at the Czech National Library.

The manuscript is currently at the National Library of Sweden, Stockholm where it is preserved well.

Why the name Devil’s Bible?

The Codex Gigas or Devil’s Bible was written by a monk who was punished to be walled alive for breaking his monastic oath as a monk. To spare himself from such punishment he promised that he would complete a book in one night. The book would glorify monastery including all human knowledge.

But, at midnight he realised that he couldn’t complete the book all alone so he made a prayer, not to God but the fallen Angel Lucifer. He decided to give his soul in exchange for the completion of the book.

The book has a full-page portrait of the Devil 50 cm tall. The monk added the picture of the devil out of gratitude. Because of the Devil, he could complete the book.

Opposite to that picture is the full-page depiction of the kingdom of heaven. It juxtaposes good and evil. It also highlights that there is a reward in god-fearing life whereas the sinful life is full of horrors.

Portrait of the Devil in the manuscript

It was common in the Middle ages to have portraits of Devils in the books but the portrait in the Devil’s Bible is unique. He is alone on the page and is very tall (19 inches). The picture is front-facing. The Devil is nude except for the ermine cloth which is the only thing he wears on his body. The ermine cloth depicts his royalty. Devils’ attire makes people believe that he is the Prince of Darkness.

The manuscript falls under the wonders of the world. This wonder is not kept in an open space but in a fairly dark room. It helps to keep the book away from any damage. There is also a movie made on the manuscript in Swedish which describes the history of the Codex Gigas or Devil’s Bible with English subtitles.