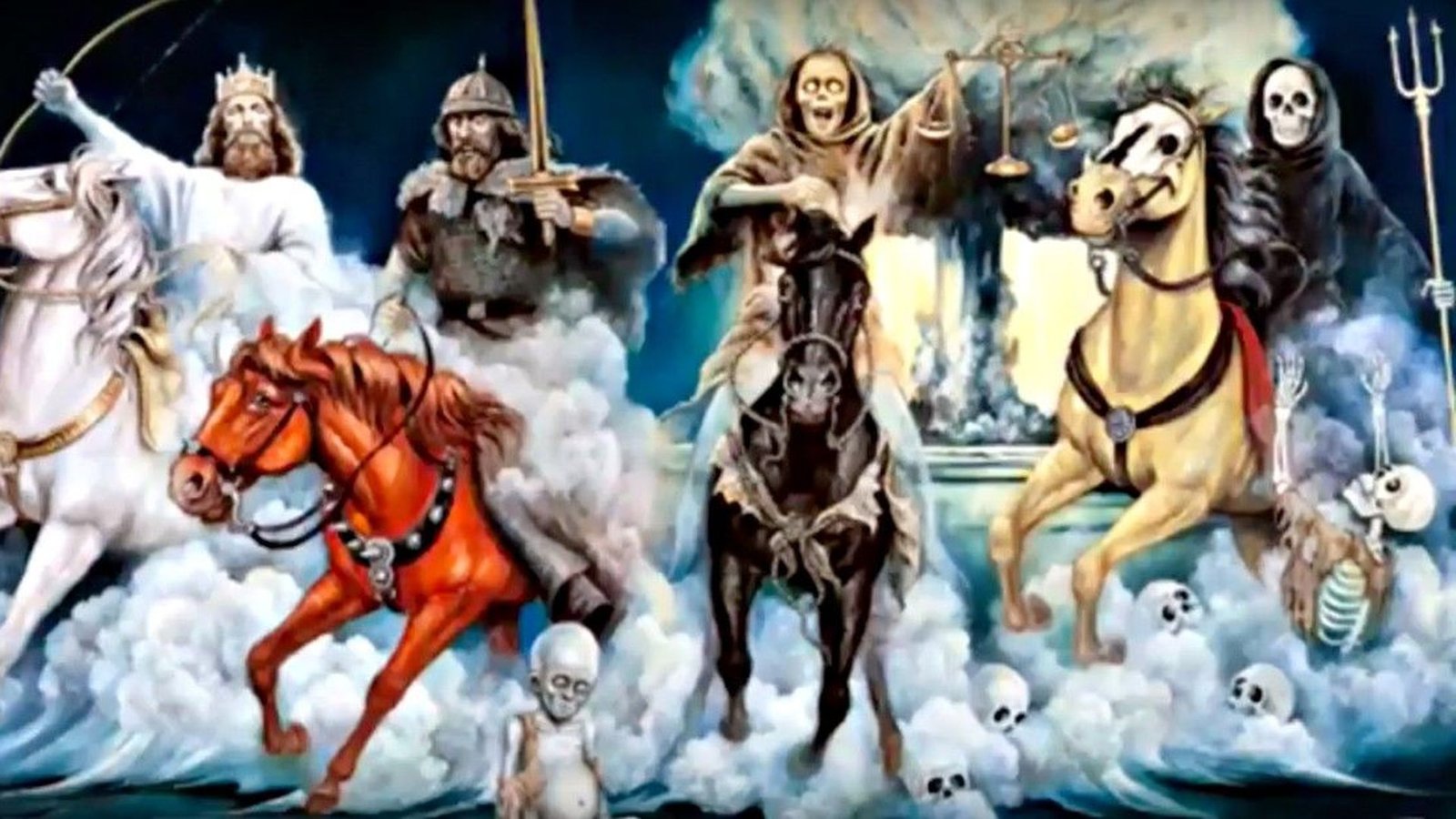 The fable of Four horsemen of the Apocalypse is present in the last Testament of the Bible written by John of Patmos. They are figures in Christianity who are named as punishment from the almighty. According to the book of Revelation (6:1-8), a book in God’s right hand is sealed with seven seals. God opens the first four of the seven seals and thus apocalypse takes place.

The first of four horsemen on a white horse

The first horseman rides a white horse carrying a bow and wearing a victor’s crown. He is a conqueror who conquest and emerges victorious.

In Revelation 6, the rider gets just one crown and does not takes it by himself. So, it indicates that a third person gave the authority to the rider to accomplish his work on his behalf. Another interpretation in the Old Testament gives the name ‘Pestilence’ or ‘plague’ to the white horsemen. It is associated with infectious diseases.

A popular Christian theologian, Irenaeus, was the first to interpret this Horsemen as Christ who successfully spread the gospel. But the opposing interpretation negates that Christ can take the form of Horseman as Christ’s opened the seals and it is unlikely that He would also be one of the forces released by the seals.

The second of four horsemen on a Red Horse

The second horseman represents War. He is always ready for battle and mass slaughter. He holds a sword upward as represented in the thirteenth-century Apocalypse manuscript and his horse color is red. It suggests spilled blood during the war. In military symbolism, the horseman with crossed swords signifies battle.

The third horseman on a Black Horse

The third horseman rides a black horse that carries a pair of balances or weighing scales. It indicates famine. The way a piece of bread used to be measured during the famine. Other authors interpret the third horseman as the ‘Lord’ who holds the scale of justice and is a law-giver.

According to the legend, the third horseman is not supposed to destroy oil and wine but bread as it is a necessity. Men can live without oil and wine but not without bread. This suggests that the abundance of luxuries for the wealthy while staple food will be scarce. Such selective scarcity may have happened during the time of writing the Revelation book.

Another interpretation regarding the preservation of oil and wine is also that storage of these items may be also due to the Christians’ faithful, as they use them during sacraments.

The fourth horseman on a Pale Horse

The fourth horseman is the personification of death. He is seen not carrying any weapon or object but Hades following him (resting place of the dead).

Death’s commission was to kill the Roman population with all the four judgments of God – with a sword, pestilence, famine, and wild beasts

The color of the horse is ‘Pale’ which relates to the ashes of the corpse.

The Book of Revelation lists Conquest, war, famine, and death as the four Horseman of the Apocalypse while in the old Testament Book of Ezekiel they are sword, famine, wild beasts, and pestilence.

Whatever may be the name the Horsemen are responsible for the population size in nature. They were the reason for multiple catastrophes. It is like God’s punishment to people before they die. Only then a beautiful world will be created where people will have faith in Christ and will accept him as their savior.