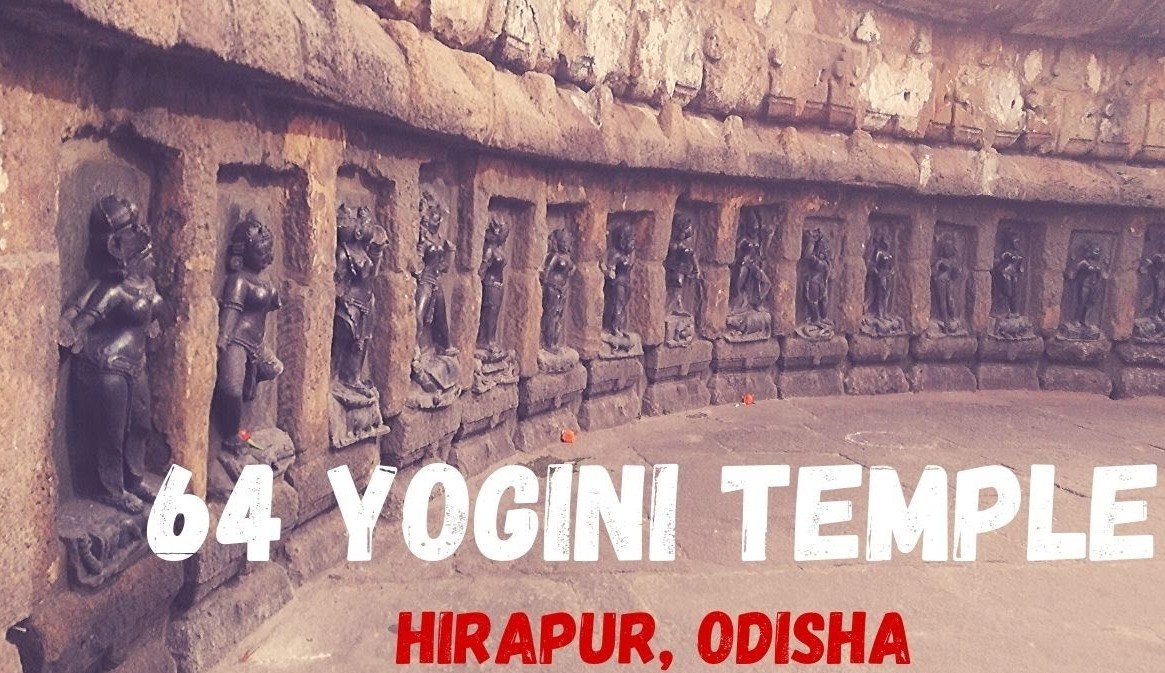 The Chausath (64) Yogini Temple is located in Hirapur, 20km away from Bhubaneswar, Odisha. It is dedicated to the yoginis, an auspicious goddess-like figure. The architecture of the Temple is round and roofless. It is a tantric shrine involving rituals like worshipping the five elements of nature- fire, water, air, earth, and ether.

The idols of yoginis are like female figures standing on an animal, a demon, or a human head depicting feminine power. The idols express different emotions like rage, happiness, sadness, pleasure, joy, and desire.

Temples devoted to yoginis are rare though but such temples are also found in some other places in India.

History of the 64 Yoginis Temple

During the 9th century, queen Hiradevi of the Bhauma dynasty built the temple. The dynasty was famous for producing many queen rulers. The local villagers were maintaining the temple then. According to the local priest, Goddess Durga took the form of 64 demi-goddesses to defeat the demon.

The goddesses fighting styles were equivalent to yoginis and Goddess Durga commemorated them in the temple.

The architecture of the Temple

The temple is circular and small. It is only 25 feet in diameter. Built with blocks of sandstone, the wall inside the temple houses the statues of Goddesses. The image at the center of the Temple is of Goddess Kali standing on the human head. It represents the victory of heart over mind.

The temple has a Mandala design while there is a Shiva idol at the center of the inner sanctum. The yoginis and four Bhairavas surround Lord Shiva. To reach the Shiva Lingam, the temple has a yoni-pedestal.

The entrance of the temple has got a pair of door guardians. Lord Shiva is found in the inner circuit while images of sixty yoginis are found in the outer circuit of the circular temple.

Kedarnath Mahapatra of Odisha State Museum in 1953 rediscovered the 64 yogini temple despite being so close to the Bhubaneswar temple site.

The temple is open to the sky because there is the belief that yoginis are capable of flying.

Yoginis are goddesses or demi-goddesses worshiped in the Tantric practices. Their temples consist of a group of 64 of them, but in certain temples, there are also mentions of groups of 42, 81 yoginis. The structure of the temple is in a chakra or a wheel fashion. The wheel formation depicts the yoginis who sit on each spoke of this wheel.

The images of the yoginis depict Goddesses standing on their Vahanas(animal vehicle). They are standing with uncovered bodies but they adorn bracelets, armlets, anklets, and necklaces.

The yoginis images are made of chromite rock and they are about 40cm tall. There are 9 unsmiling goddesses outside the temple which the locals describe as nine Katyayanis.

Mahamaya Temple is another name for the temple. The Archaeological Survey of India is currently maintaining the temple. Moreover, the local priest takes care of the worship performed by the devotees. Early morning is the best time to visit the temple.

64 yogini Temples are very unique temples with yoginis all around and missing ceilings. Thus, this type of temple would intrigue students of architecture.