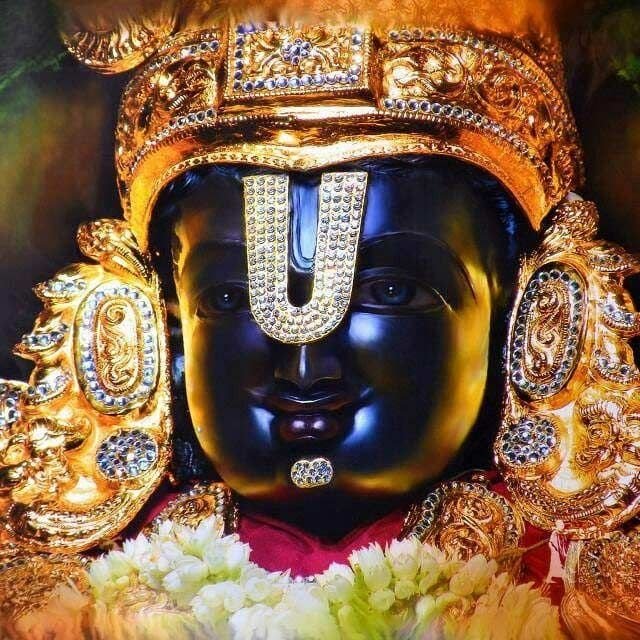 Have you ever noticed, wondered and questioned yourself about the white mark, seen on the chin of Lord Venkateshwara!? Before quenching the thirst of your curiosity, let us gain some basic knowledge of this deity. Lord Venkateshwara as we all know, is the incarnation of Lord Vishnu who took birth in Kaliyuga to a woman named, Vakula Devi. But do you know what’s the significance and story behind this avatar? Read on to know more captivating things about The God of Richness.

Belief says, once, Goddess Lakshmi had a fight with Lord Vishnu, left Vaikunta and disguised herself to settle in a part of earth (Karavirapur / Kolhapur). Lord Vishnu who also came to earth in search of Maa Lakshmi latched into situation where he gave a boon to a Chola King which said, he would marry the king’s daughter in his rebirth. Then, Lord Vishnu took birth in Kaliyuga, fell in love with Akasa Raja’s daughter Padmavathi and married her in the presence of all gods.

Significance and powers of Lord Venkateshwara:

Lord Venkateshwara is the presiding deity of Tirumala Temple at Tirupati. The word Venkateshwara is itself a combination of two words: Venkata – a hill in Andhra Pradesh, Ishwara – Lord. Alongside, Venkata also means the destroyer of sins. The deity also has many other names like: Srinivasa, Balaji, Venkatachalapathi, Govinda etc.

Lord Venkateshwara is worshiped across the globe, some well-known temples in India are: Venkatachalapathy Temple – Trivendrum, Shree Balaji Mandir – Fanaswadi, Padutirupathi Venkataramana Temple, Kodandarama Temple – Nellore, Shree Balaji Temple – Washim etc. Tirumala Tirupathi Temple in Chittor District of Andhra Pradesh is prominent among all, as it is believed to be the location of divine marriage of Venkateshwara and Padmavathi.

The history of white mark on the chin of Lord Venkateshwara:

I am sure, all of us would have worshiped Tirupathi or any Mandir of Lord Venkateshwara at least once in our life time. But how many of us have observed the white mark on chin of the idol? Have you ever imagined even that tiny mark holds a great story behind it? As read above, Tirumala is the predominant temple among other temples not only in India but over the globe. We also read about why it is so. But do you know, another such flabbergasting incident that took place on the hills of Tirumala! Don’t miss the end to know what it is.

An unknown named king appointed Shri Ramanujacharya, the proposer of Vishishtadwaitha as administrator of Tirupathi Temples. As per the order, Ramanujacharya took over the administerial powers and brought many changes in pooja rituals etc.

Once Shri Ramanujacharya called upon one of his disciples Anantha Alwa and said “yourself and your wife will be responsible to offer flowers, which are essential for the pooja of the lord everyday”, agreeing to his master’s words, Anantha Alwa decided to create a flower garden on top of the hill and succeeded in the same. Both Anantha Alwa and his wife were sincerely doing their routine of watering the plants and taking flowers to temple. Then there came a day when Anantha Alwa had to leave his pregnant wife alone as he had to go out of town on a work. His wife as everyday practice, went on plucking the flowers on that hot sunny day.

Seeing this, Lord Venkateshwara felt pity about the poor woman and came to her in a disguised form as a little boy and said he would like to extend his help. But the lady gently refused his appeal and continued with her works. However, the little boy managed to convince the woman and started plucking the flowers for her.

Meanwhile, Anantha Alwa returned back and was enraged to see the sight, he ordered the kid to go back as it was solely their responsibility to offer the flowers to Lord. But the kid just smiled and stood as it is! Infuriated by this, Anantha Alwa hit the kid with a wooden baton that injured his chin. The kid then went away silently without uttering a word.

Later in the evening, the couple took the flowers to temple and were astonished to the see the idol bleeding from the chin! Then, Anantha Alwa realized that it was Venkateshwara Swamy who came to help them. Immediately he applied the camphor to the injured area to stop bleeding. From then, applying camphor to lord’s chin became a practice and the same is the white mark what we see in the present day.

Furthermore, the belief also says, it is Anantha Alwa’s descendants who offer flowers to Tirumala temple even today! Interesting story… Isn’t it?