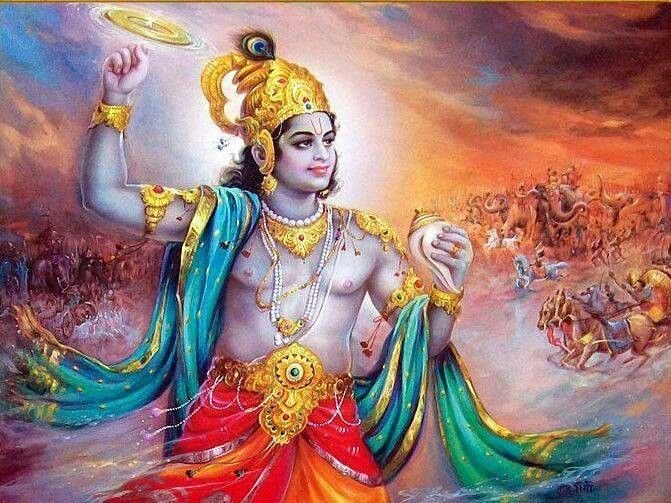 Sudarshan Chakra is an auspicious disc-like weapon with 108 jagged edges, used by the Hindu God Krishna or Vishnu. It is seen generally on the right rear hand of the four hands of Vishnu, who also holds a Shankha (conch shell) a Gada (mace), and a Padma (lotus).

According to Puranas, Lord Vishwakarma is the architect of this weapon.

Use of this Chakra

Many times in history there was the use of this Chakra. Some are discussed as under:

1. In Mahabharata, Lord Krishna used this Chakra as a weapon. Krishna beheaded Sisupala after he invoked the Chakra.

2. The Chakra cut the corpse of Sati into 51 pieces. The 51 pieces fall in different parts of the Indian subcontinent and became “Shakti Pithas”.

3. Krishna used this Chakra to help Arjuna take revenge on Jayadratha who killed his son. He with his Chakra hide Sun. Jayadratha thought he won as Arjuna could not kill him before sunset. Thus, when Jayadratha comes out of the protection to celebrate Arjuna’s defeat, Lord Krishna removes his Chakra and the Sun comes out. He orders Arjuna to kill Jayadratha and Arjuna follows his order.

4. In Valmiki’s Ramayana, Purushottama (Vishnu) kills Hayagriva (Danava) atop Chakravana mountain and takes away Sudarshan Chakra from him.

Who gave the Chakra to Lord Krishna?

Where is the Chakra now?

There are doubts regarding the current location of Sudarshan Chakra.

Some believe that nobody can find it in the mortal world. Krishna used the weapon in dire necessity several times and after he departed from Earth it too departed with him. While many others believe that it went to Lord Vishnu after Lord Krishna left the Earth.

According to one of the media channels some years back, Sudarshan Chakra was found in the jungle of Yamunanagar ( Haryana). It was kept in a temple in the jungles and a priest took care of that.

The Sudarshan Chakra looked ancient, made up of sandstone and whitish-gray.

According to the priest in the temple, the story goes like this:

When Pralaya (doomsday) destroyed life on Earth, Lord Vishnu left the Chakra on Earth. After every pralaya, Sudarshan Chakra changes as it plays a major role in the destruction.

Yamunanagar is a place where Bhrama, Vishnu, and Maheshwar decided to establish a new yuga after doomsday.

After Lord Vishnu left the auspicious Chakra in Yamunanagar where it was lying there unnoticed. Some people one day while hunting in the jungle discovered this huge stone Chakra but couldn’t take that along with them as they became blind when they carried it.

Later priests after close examination found that it was Sudarshan Chakra.

Reasons for believing the stone Chakra as Sudarshan Chakra

Thus, the people of Yamunanagar started worshipping the Stone Chakra.

As the Chakra was Lord Vishnu’s and Shree Krishna was Maha Vishnu’s incarnation many also believe in present times that it went to the abode of Vaikuntha and arrives at the order of Lord Vishnu.