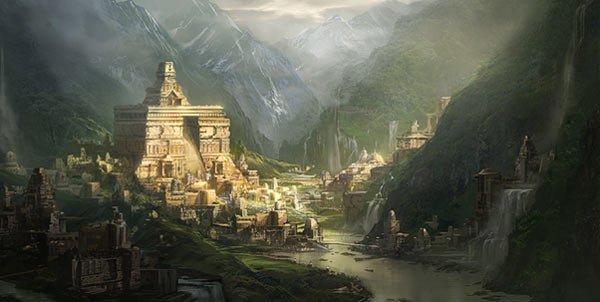 Shambhala is a mythical kingdom according to the Hindu and Buddhist mythology. This place is assumed to preserve most of the sacred spiritual teachings.

Origin of the word ‘Shambhala’

The word ‘Shambhala’ or ‘Shambala’ is taken from the Hindu Puranas referring to Sambal in Uttar Pradesh or Sambalpur in Odisha.

This place has a mythological relevance. According to the prophecy in Vishnu Purana, Shambhala will be the birthplace of Kalki. Kalki will be the final incarnation of Lord Vishnu which will usher in a new age known as Satya Yuga. It will mark the end of Kaliyuga.

Shambhala is a Sanskrit word. It means ‘peace, happiness, and tranquillity’. Hence, all the inhabitants residing there achieve enlightenment. Shambhala is called the ‘Pure land’ of a Buddhist. The place has a capital called Kalapa.

As Shambhala is a forbidden land, not everyone can reach there. Only people with pure hearts can set foot there. According to Hindu scriptures, Shambhala will guide the way to the new era of mankind. The Hindus call this place a Land of worthies.

In Tibetan Buddhism, Shambhala is a mysterious place located beyond the Snowclad Mountains of the Himalayas. According to Dalai Lama, Shambala is not a physical place. It is speculated to exist in the North perhaps near Mount Kailash in Tibet, in Kashmir (in the higher regions of the Himalayas), in the Sutlej Valley in Punjab, or the mountainous regions of Eurasia.

The name of this kingdom finds mention in various texts. One such text is Kalachakra Tantra. It discussed Shambhala extensively. According to the text, the world will descend into darkness, and the twenty-fifth Kalki king will arise to triumph over the darkness and restore peace and light into the world.

Kalki is the ancient king whose name means Unifier according to Kalachakra Tantra. He would unify other kings to fight the destructive forces. This text states that the gradual degradation of mankind will lead to universal materialism. At this stage, the king will usher from the mythical kingdom to vanquish the evil forces, while the other twenty-four kings will follow him in this war.

The outer or external level of Shambhala is the physical place in the North where teachings take place. Only individuals with the appropriate Karma can there and experience enlightenment.

The inner and alternative level refers to more subtle understandings of what Shambhala represents in terms of an individual’s body and mind (inner), and the meditation practice (alternative).

Shambhala, on the internal level also represents the Heart Chakra. It focuses on the cycle of breathing and the movement of energy through the body.

During this state of confusion, greed, jealousy, and anger develop in the people. They become more selfish. Their behavior with others determines their Karma and it follows a cycle. Karma drives the internal and external cycles. Thus, the spiritual practice of Buddhism aims to overcome the energies of Karma and lead the way to peace.

The ultimate level of Shambhala is to bring all the three levels in the heart chakra and dissolve them. It will bring out the clear light mind which is the ultimate representation of Shambhala.

Though many explorers and mystics searched for the mythical kingdom, none could find proof of its existence. This place is a mystery for many explorers who have not managed to locate the place. But, there is a hope that it will materialize in humanity’s time of need as ancient texts declare.