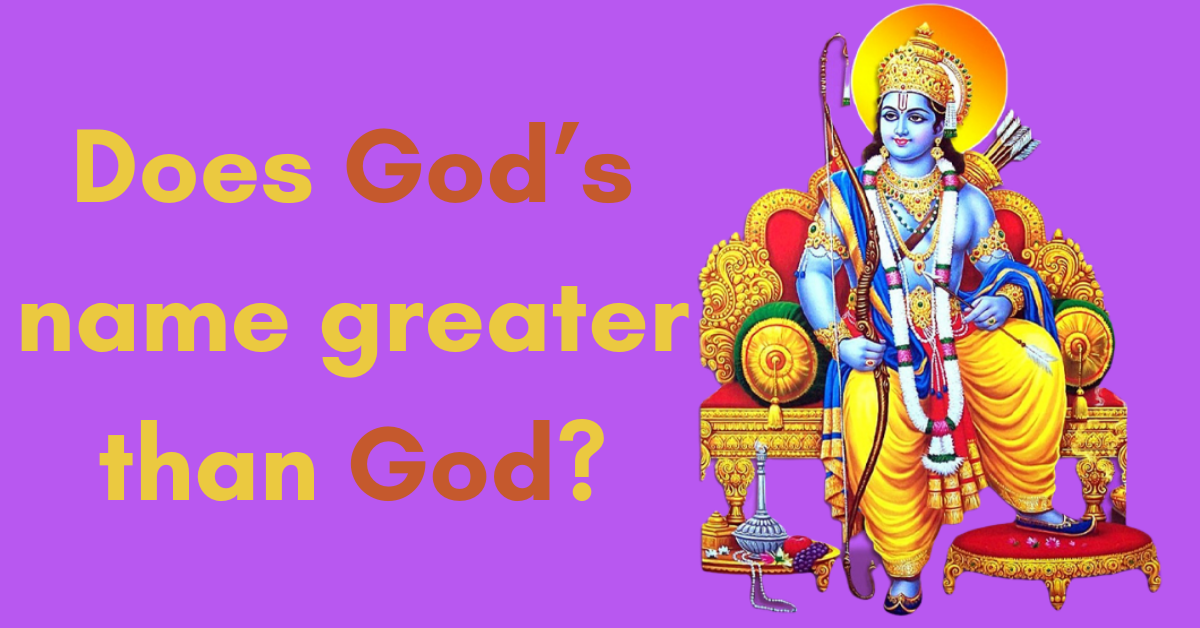 God is All-powerful But, anything that is superior to God is the name of the divine power Himself/Herself. If you chant God’s name you can accomplish the impossible and can change even the will of the divine itself.

Lord’s name is so powerful that if you repeatedly chant your mountain of sins can be burned to ashes.

Significance of God’s name in the Story of Ratnakar

Do you know the story of Ratnakar? He was a ruthless highway robber. He never hesitated to murder his victims for gold. Ratnakar continued this criminal activity until his mentor Narada told him about the mysteries of taking the divine name.

Ratnakar’s mentor’s words changed his life and he left his infamous career to immerse his life in the chanting of Holy Rama’s name. His constant contemplation metamorphosed him into Valmiki. Valmiki is the divine Saint we all know who penned Ramayana.

Do you know about Hanuman Ji’s life? His illustrious life is a glowing testament to the fact that if you rely on God you can perform the superhuman feat.

The story goes like this – Once sage Vishwamitra and Vashishta were debating about the most powerful in the Universe. According to Vishwamitra, Lord Rama’s arrow was more powerful while Vashistha believed that God’s name is more powerful than God Himself. Both proposed for a test to validate the argument. Vishwamitra himself executed the test.
There was a custom in those days for the devotees to receive guests with great reverence, especially the holy ones. Failing this duty would be followed by curses or fall prey to unpleasant circumstances.
The sage Vishwamitra was aware of this and deliberately visited a devotee-king Chandrabhanu while he was in deep meditation. In the state of trance, the king failed to receive the saint with great reverence. Vishwamitra was furious about this and went to Lord Rama. He made Lord Rama take an oath that who infuriated Vishwamitra would be killed by his error-free bow.

Lord Rama held holy ones in high esteem and always went to a great extent to appease them. Bound by the oath he took for Vishwamitra, he set out on a quest to kill the one who enraged the great sage. Meanwhile, Sage Narada informed Chandrabhanu about the danger to his life. It scared Chandrabhanu and he asked Narada to help him. He asked for ways to avert his death.

Narada suggested he seek protection from Hanuman. He further said that he should extract the promise from Hanuman and then reveal the source of danger.

Chandrabhanu went to Hanuman and held His feet. Hanuman took an oath in Lord Rama’s name to protect the king at the cost of his own life too. On one hand, the Lord was bound by His oath, while on the other His beloved devotee Hanuman was following an opposing oath.

Rama sent his superior army force to kill Chandrabhanu to fulfill His promise. But within a moment Hanuman vanquished all of them. Rama then sent His siblings and ministers but Hanuman again defeated them. Finally, Rama came to the scene and was surprised to find Hanuman defeating the one who stood against Him.

Lord Rama ordered Hanuman to give up but the latter was bound by the oath of his Lord and so he told Rama that he would never do anything to tarnish His glory.

Rama then took His divine bow and send it towards the king, but all the arrows he sent turned into garlands of flowers and decorated the neck of Hanuman. It astonished the onlookers. The sage Vashishta explained to them that though Lord Rama’s arrows were invincible they were no match to His name.

It was then that everyone including Vishwamitra understood the power of God’s name. Lord Rama was extremely pleased by the devotion of Hanuman and blessed Him immensely. Rama forgave Chandrabhanu and renounced His oath.

The above stories reveal the power of the divine’s name. It protects one from everyone including God Himself. Chanting God’s name brings one closer to God. There is no power to fear when you chant Lord’s name.