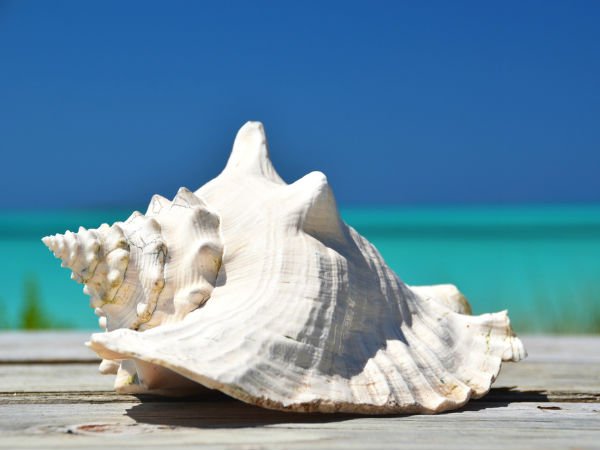 The blowing of Conch or ” Shankh” is often done once or several times while or before doing rituals. During aarti or before aarti. The blowing of Shankh is done during the start of battles, such as the Mahabharat war. Sometimes it is an indicator of One’s victory in a battle.

The usage of Shankh is done to represent images of deities, especially Vishnu.

Try keeping A Shankh near your ear, you will notice that you hear the quiet roar of waves crashing on a distant beach as if the whole celestial existence is registered in the conch. Those might be the echoes of the beach trapped eternally.

Just like how it is recorded that the Sun produces an Om sound while the light or Sunrays are traveled to earth, One blowing a Shankh through the force of air also produces an “Om” sound.

It States that Om is produced through the various elements of nature, To make sure we are all in a state of “well-being”. Om is considered An Auspicious sound, which was chanted by the supreme Lord before creating the world.

2) Ever wondered why the Conch is called “Shankh”?

As the story goes, A demon named Shankasur defeated all the devas and stole the sacred Vedas, and went down to the bottom of the ocean. The devas then appeared before Lord Vishnu for help. So, Lord Vishnu then decides to take the Matsya Avatar ( Fish) incarnation.

After taking the Matsya Avatar, Vishnu blew the conch part of the ear and the head of Shankasur. Vishnu kills Shankasura, and at that time an Om sound was produced.

Thus the Shankh is named after the Demon “Shankasur”.

3) Health Benefits of Blowing A Shankh:

Our Ancestors knew that when a Shankh is blown its cosmic vibrations can cure diseases. Shankh or Shankham in Sanskrit means “a conch holding the sacred water”. The Earliest written documentation of Shankh can be traced back to Vedas and other Holy Hindu texts like Bhagwad Gita and Vishnu Purana.

Let’s learn the Health Benefits of Shankh tracing from the Old traditions:

A Small Health Tip for Skin:

Store some water in a conch overnight and the next morning massage your skin with this water. This cures many skin diseases, rashes, allergies, etc. It also cures ‘white spots on the skin.

2. Store water overnight as above and in the morning, add rose water to it. Wash your hair with this mixture. The natural color of hair will be restored within a few days.

4) Why did Modi Ji ask us to Blow the Shankh during the time when Covid- Pandemic Begun?

India was the first country to root traditions into reducing the plight of the Pandemic. As soon as the Shank is blown the frequencies of divine energy (Shakti) are emitted into the atmosphere. Along with these energy frequencies, yellow circles of Chaitanya (spirit) are also projected in the atmosphere. Even Bliss being emitted in the atmosphere. This increases the proportion of shakti, Energy, and Happiness in the environment and that is why the negative energies get distressed and run away.

Another specialty of Shank is that the vibrations emanating on blowing it destroys the disease causing germs in the atmosphere.

Thus the virus would lose its capacity to infect people and we could be happy after the 21 days of lockdown which had mentally influenced us.

Anything that has spiritual significance should be taken care of properly, as per the rituals and customs. And Shankh is no exception. A Shankh may appear small, but it has immense healing power.