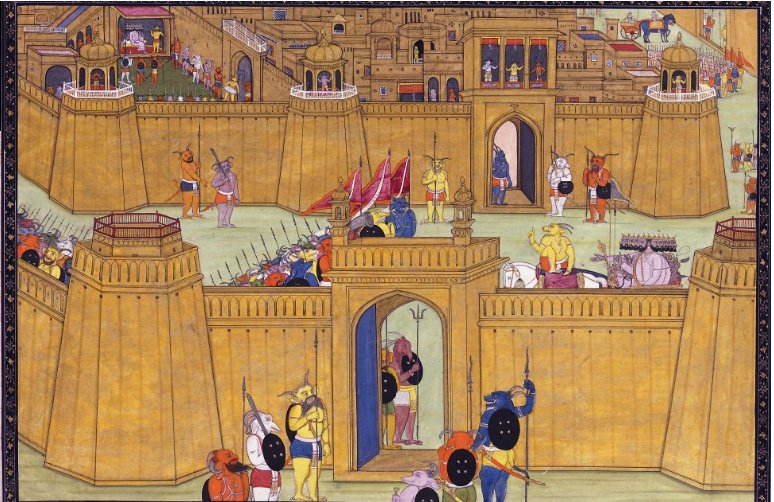 We have heard about the epic Ramayana, where Lord Rama defeats Rakshas Ravana in Lanka along with the Vanarsena. Sage Valmiki with consent from Lord Brahma wrote the epic Ramayana, The great epics of the world. Undoubtedly, The story of Lord Ram and Devi Sita is the tale of Heroism, Courage, Love, and Loyalty of human emotions and faults that lead to tragic consequences and of the victory of good over evil.

But, have you heard of the history of Lanka and Golden City prior to Ravana?

The Sathyuga ended and Treta Yuga began, This was also the beginning of Adharma. Rakshasas devastated the earth and began to harm the Human, Lord Brahma when created the Universe, he created the Yakshas and Rakshasa to reside and take care of the aqua/marine creatures.

A Rakshasa by name Vidyuthkeshi married Salkunthkataksh, they both left the ocean started their living on the Land. Thus, They gave birth to a boy and abandoned the baby on the Mandrachal mountain.

Lord Shiva and Parvathi passing by the sky, saw this baby on the mountain and seeing the baby crying they approached near, Lord Shiva blessed him and converted him into a youth. This youth is the Rakshasa Sukeshi.

Sukeshi performed sincere Tapas (penance) to please Lord Siva and secured a boon ‘Akashachari Nagara’ or a Flying Abode. Sukeshi’s capital was situated in the sky illumined brightly due to virtuosity attained by the demons.

Birth of Rakshasa Malyavan, Sumali and Mali and they acquiring the Lanka:

Sukeshi met a Gandharv Gramani, who got his daughter Devavathi married to Sukeshi. As time Flew, Sukeshi and Devavathi get three children : Rakshasa Malyavan, Sumali and Mali.

The three Rakshasa were very Powerful and were Undefeatable with the blessing from Lord Brahma. Consequently,which they achieved after a great penance by pleasing Lord Brahma.

The three approached Lord Vishwakarma (the great Devine Architect) to design a great Palace to them, similar to the divine palace as in Devaloka.

In a fear seeing these powerful Rakshasa, Vishwakarma informs them about the Beautiful Golden City Lanka which he has constructed as insisted by Lord Indra which they can occupy.

Along with the three, many hundreds and thousands of Rakshasas went and settled in the Lanka. There the Gandharva Daughters Sundari, Ketumati & Vasudha married Mali, Sumali & Malyavan.

The three Rakshasa were devastating and resisted the armies of King Indra as they attacked the Amaravati -the capital of Devas. Lord Vishnu assured the Gods who came seeking help from lord Vishnu, informed to destroy the three rakshasas and had a grim battle.

Vishnu Killed Mali and Malyavan and other Rakshasas after many fierce battles, seeing this Sumali and other rakshasa, in a great scare to escape from Lord Vishnu hid himself in the Pataal loka.

After when all the Rakshasas had left Lanka, the Yaksha Kubera came and occupied the Golden city Lanka. Kuber, who was the chief of the Yaksha also believed to have a lot of wealth, was asked by Lord Vishnu to create and remake Lanka.

He was known as the ‘God of Riches’ and recognised by Lord Brahma as well.

After many years Sumali visited Lanka, seeing Kubera in Lanka, Sumali goes back to PatalLoka and plans to get back his Lanka, informs his daughter Kaikeshi to marry Sage Vishrava so that her children’s can gain back Lanka from Kuber.

Sage Vishrava and Kaikeshi gave birth to 4 childrens,3 Rakshasas Ravana, KumbhaKarna, Shurpanakha and the youngest was Vibhishana a sattvic (pure) mind and a sattvic heart person.

Ravana went to Capture Lanka. Kuber was more than happy to make Ravan a part of the kingdom but Ravana had different plans and wanted the entire place to himself and have a kingdom of his own with his demons.

So, they had a fight and finally, Kuber lost and had to move to mountain Kailash. Kuber was aware that he was safest at Mount Kailash. as the mountain is the abode of Lord Shiva that devout Shiva-devotee Ravana would never dare attack.

1 thought on “Do you know about the Lanka that existed before Ravana?”