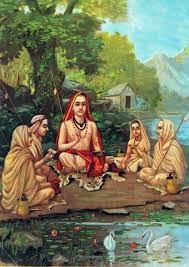 Adi Shankaracharya was a philosopher, spread Advaita Veda’s and a great teacher known as Jagat guru and was the teacher of Sanatana Dharma, which is now known as Hinduism. Sanatana Dharma practices eternal practices, written in scriptures, smritis, Puranas, etc, where one gets connected with the god. They say Shri Ram united the North to the South, Shri Krishna from the West to the East. But Adi Shankaracharya united the whole of India from the West, East, The North, and the South. The JagadGuru has established 4 Peetha’s situated in Karnataka, Gujarat, Uttar Pradesh, and Orissa.

To establish and spread the Sanatana Dharma, there were many sages or rishis who took part. Among them was Adi Shankaracharya, The Jagadguru. If he wasn’t there today Hinduism wouldn’t be a Dominant religion in a country like India even after many conflicts.

“Kallady” simply means beneath the feet. How we are at the feet of the divine, to worship the divine. The great guru was born in this holy land situated in Kerala, In the town of Kallady, near the banks of the Purna River.

Shivaguru and Aryambha gave birth to a child whom they had prayed in the ancient Vannakanatha Temple, Thrissur. Lord Shiva appeared in Shivaguru’s dreams and blessed the couple with a divine boy. This divine boy showcased extraordinary things at a young age.

One day Adi Shankaracharya’s father, Shivaguru asked him to give prasad to Goddess Lakshmi and come back with a pot of milk. after the kid reached the temple was closed, hearing this he was crying. Suddenly, there came a light from the door, took the pot of milk, and then gave an empty pot back. Since there was no milk to take home as prasad, he again started crying and then a light came and filled his pot with divine milk.

One day it is said that a miracle happened: When he was taking bath in a nearby river, a crocodile caught hold of his leg and dragged him; his mother saw and cried. Then he asked his mother to give him permission to take Sannyasin so that the crocodile might leave him according to the divine wish. At this crucial hour, his mother agreed and was released from the jaws of the crocodile dramatically. Thus, he had become a Sannyasin to take up his chosen divine mission.

He interpreted the theology of Upanisads and preached it for the benefit of humanity, but people are misguided with false doctrines. He traveled the whole of India. In his journey, it is said that he met many people including Govinda, and Gaudapada (who wrote verse commentaries on the Upanisads, the Bhagavad Gita, and the Brahma Sutra in Benaras).

He started learning at the tender age of 3. Grasped the hymns, scripts very easily in Sanskrit and he divided the Peetham’s like the four Vedas Atharva Veda, Sama Veda, Yajur Veda, and Rig Veda. The north Peetham is Atharva Veda, which consists of Hymns, poems, scripts, and magic. The south is for yajur veda, west for sama veda and east for rig veda.

Four Peetha’s or Sources of Learning:

Adi Shankaracharya made 4 Peetha’s or sources of Learning which are situated in Sringeri, Dwaraka, Badrinath, and Puri. The first Peetham by Shankaracharya was at Dakshina, Sri Sringeri Sharada Peetham in Sringeri.

From Shankaracharya, there is an unbroken chain of Guru Parampara. Now, Jagadguru Bharathi Tirtha Mahaswami is the Indian religious leader who is the current 36th Jagadguru Shankaracharya of the Sringeri Sharada Peetham.

The names of the four Peetham’s are :

Books Adi Shankaracharya probably wrote are:
The commentary on Gaudapada’s Karika to the Mandukya Upanishad, one of the Hindu scripture
The commentary of The Srimad Bhagavad Gita was done by him.

Apart from that, he has composed songs like Guru Ashtakam, Bhaja Govindham, Kanakadhara Stotra, Panchikaran, Shiva Manasa pooja, Soundarya Lahari, and many more.

8 thoughts on “Who was Adi Shankaracharya? What were his contributions to Sanatana Dharma?”