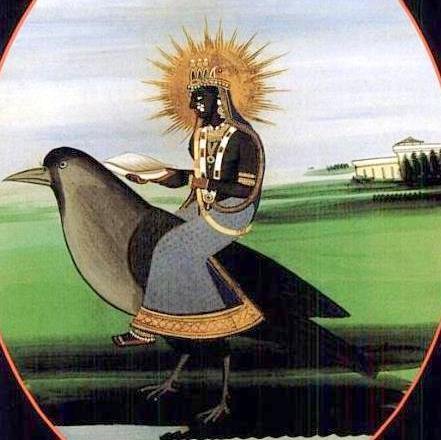 I’m sure you will be knowing about Goddess Lakshmi, the goddess of Prosperity and good luck. But do you know About Goddess Alakshmi? Well she is the exact opposite of what Lakshmi does, A goddess of misfortune and badluck, who is also the elder sister of Lakshmi.

How and Where was Alakshmi Born?

In the Second Avatar of Vishnu, Kurma Avatar- Alakshmi was born in that period. It was said that in the time of churning the sea, Samudramanthan, goddess Lakshmi came out and along with her Alakshmi emerged too.

Right after the Samudramanthan in the sea, First the poison emerged where the goddess Alakshmi took birth, and then the sweet nectar or Lakshmi took birth, Hence Alakshmi is the elder sister of Goddess Lakshmi. Who is from Lord Vishnu himself.

What Happens after her Birth?

After Goddess Alakshmi arrived, A sage Duhsah Muni came in contact with her, Seeing her being born from the Samudra Manthan and by Lord Vishnu’s Grace, he considers him very lucky to have Alakshmi as his wife. They both marry and go to a Forest where they had spent a lot of time together.

As they both lay on the forest, there was a Sound coming in the distinct forest, where people were praising Lord Shiva and Vishnu by saying ” Om “. So, hearing this Alakshmi starts screaming as she closes her ears and behaves very abnormally. Seeing this side of Alakshmi, Duhsah muni gets very furious and takes her to A rishi. The rishi says that she is born for misdeeds and unluckiness, hence she doesn’t like to be around religious systems.

Why is She A Goddess if she brings badluck?

Alakshmi is called by different names such as “Jyeshtha” – being the elder sister of Lakshmi . She is often known to be the dark form of a goddess and is seen wearing black clothes, holding a windowing basket and sitting on a black Crow.

It is said that A rishi told her and husband that Alakshmi should reside in a place that:

Alakshmi still resides in such places mentioned above and there is more added to that list. And do you know what happens in the Home she resides?

Alakshmi brings strife, jealousy and hardship wherever she goes. Whoever comes faces lack of knowledge, vision and positive thinking. Goddess Alakshmi also reaps the families of their wealth and brews distrust and misunderstanding among family members, friends and relatives.

She is a Goddess Therefore, since her presence makes one person better and ward her off inorder to Get The Good Goddess Lakshmi, She teaches lesson to sinners.

Some Facts About Alakshmi Devi: